Students Flock to Club’s ‘After 5’ Series at the Hood

A student-led club is boosting engagement with the Hood Museum of Art. 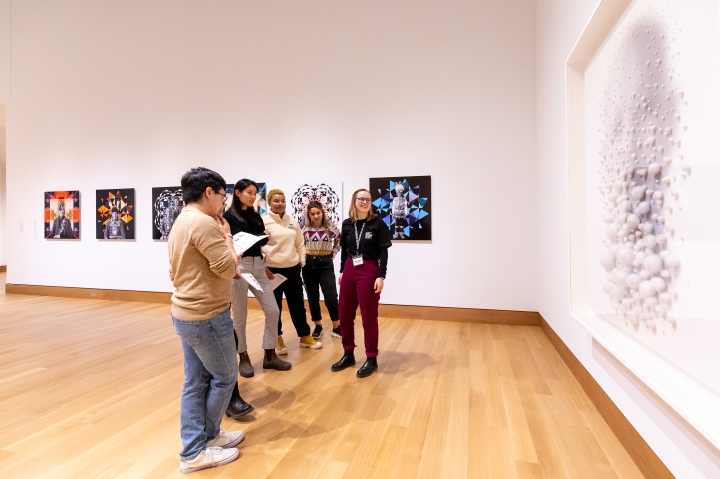 Sophia Swanson ’23 hosts a gallery chat during the Museum Club’s Hood After 5 event this winter. (Photo by Lars Blackmore)
3/10/2020
Body

The student-led Museum Club is a fairly new organization, but its evening events at the Hood Museum of Art are already attracting hundreds of students.

The club had no idea what kind of turnout to expect for its inaugural Hood After 5, held last April, says Isadora Italia, the Hood’s campus engagement coordinator and Museum Club adviser.

Italia remembers thinking she’d be happy if 100 people came. But that night, nearly 300 people streamed through the doors. “It was excellent,” she said.

“If it’s a museum-wide event, you want a critical mass,” she says. “It was wonderful to see students responding well to the space, feeling welcome in the space, having a good time, and knowing it can be a place you visit outside of class.”

Founded during the lead-up to the Hood’s reopening in January 2019, the club aims to boost student engagement with the museum. Members are asked to serve as a bridge between the museum and the student body, which includes volunteering at Hood programs and related events, when possible. During hourlong weekly meetings, they organize events, learn about exhibitions, visit with artists, and act as a sounding board for museum staff, brainstorming about student engagement opportunities, Italia says, and “coming up with ideas for things we haven’t even thought of yet.” 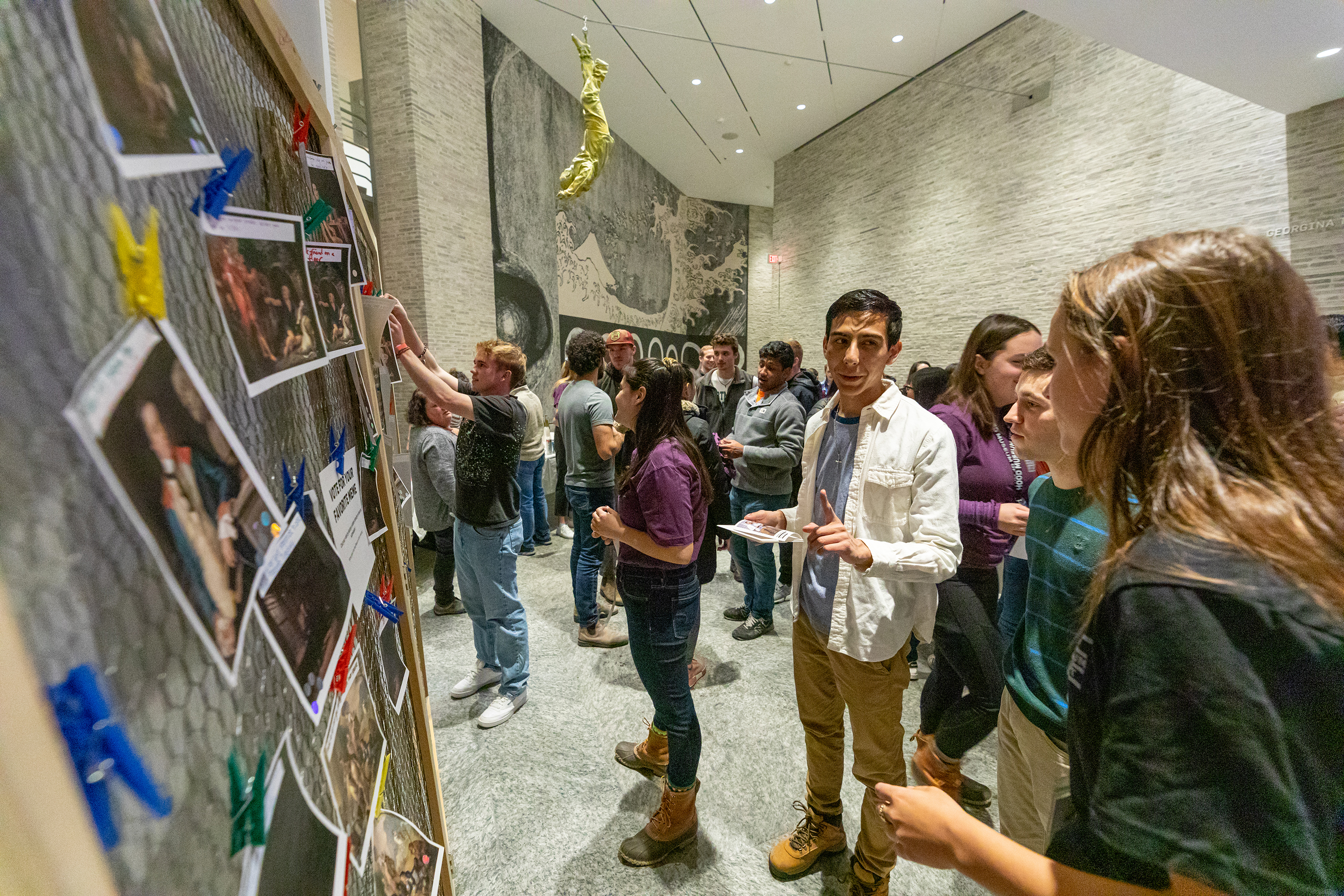 Students compete in a contest during Hood After 5, writing funny captions for art in the museum’s collection. (Photo by Lars Blackmore)

They also provide feedback about everything from programming to merchandise. Adding to the selection of museum swag people can wear and display is a goal for the club, and surprisingly, colorful stickers promoting the After 5 series have been “a big pull for people” to attend, says Devon Mifflin, ’21, the Hood’s Levinson Intern for Campus Engagement and original club member. “It’s kind of heartwarming for me when I see someone pull out their laptop and they have a big Hood After 5 sticker on their computer. It feels good.”

As club members, they also get an up-close look at the museum’s inner workings, including the acquisition process and the everyday duties of a curator.

That background will help them serve as on-campus ambassadors for the Hood, promoting its programs and fielding questions from people who may be unfamiliar with how museums work, Mifflin said. Not everyone has the opportunity to experience art in their hometown, “and the Hood has such an amazing collection right on campus.”

The quarterly series for undergraduate and graduate students is a cornerstone of the club’s efforts to connect students with the museum. Food, music, and art-related activities are staples at the free events, which have featured student a cappella performances and gallery chats by club members.

“There is definitely more of a social, conversational nature during Hood After 5,” Mifflin says. “There’s definitely a fun atmosphere.”

The gallery chats have been popular with both participants and presenters, who prepared by researching a piece of artwork on view and consulting with Hood curators.

The chats allowed participants to get an impromptu tour of the museum, says Hadley Detrick ’22, an original club member and art history major who selected a Winslow Homer study for his talk. They “could bounce around from student to student and get to hear what’s important or intriguing” about each piece.

Flexible by design, the club is open to undergraduate and graduate students, no experience necessary.

While some members study art history or studio art, others simply love museums, Italia says. “All that’s required is a desire to learn and willingness to help connect the museum to campus more.” 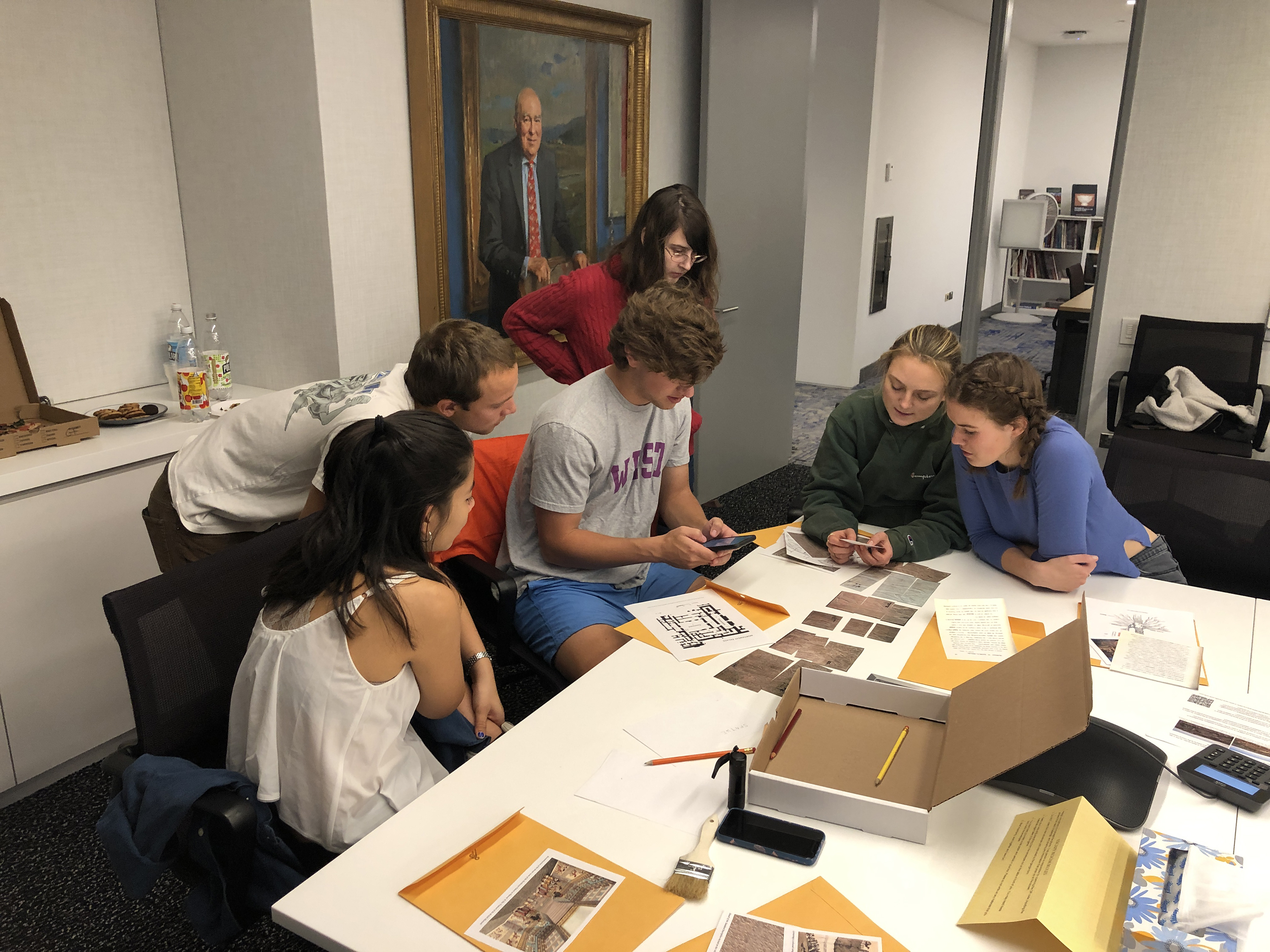 Several dozen students are involved with the club, with about 20 attending meetings regularly. Considering students’ complicated schedules, that continuity has been “really nice,” says Mifflin, who appreciates her cohorts’ level of commitment. “People feel this sort of ownership of the museum and the events that they put on, and they want to have the best possible product for students.”

Last year, the club helped plan a special student party for the museum’s reopening that attracted more than 1,300 people. During exams, club-sponsored “Hood Study Halls” offer students study space and a break, in the form of pastries and activities in the gallery.

As the club evolves, they are working on the best ways to market and advertise their events, Mifflin says. And they would “love to include other kinds of programs in the future.”

But when it comes to fulfilling their mission, so far, so good.

The goal is to make the museum a place that people “feel they have a part in, and is a part of their Dartmouth experience,” she said. “Hood After 5 has been really successful in that.”

The Hood After 5 event on April 30 has been canceled due to COVID-19. When it becomes available, information about the next After 5 event will be posted on the museum’s website.