Arts in the Time of COVID-19

The Hopkins Center and the Hood Museum find ways to engage audiences. 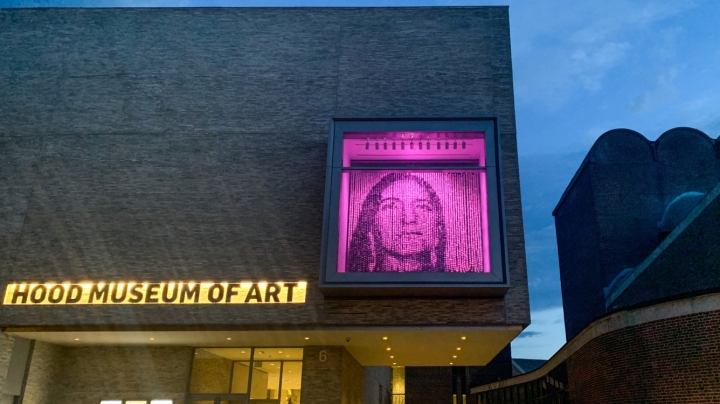 Centers and institutes across Dartmouth are exploring ways to continue their public events and maintain community during the COVID-19 pandemic. Over the coming weeks, Dartmouth News will write about some of the creative solutions that have emerged. Up next: public programming in Dartmouth’s entrepreneurial network.

On the morning of Friday, March 13, Jami Powell, the associate curator of Native American art at the Hood Museum of Art was putting finishing touches on a major show of six contemporary Indigenous ceramists, set to open the next week.

Later that day, in response to the COVID-19 pandemic, the Dartmouth campus, including the Hood, was effectively shuttered.

“We finished hanging Jami’s show Friday the 13th at noon, and I had to break the news that we were closing at 5 o’clock,” says John Stomberg, the Virginia Rice Kelsey 1961s Director.

It’s a sign, Stomberg says, that the museum itself will not go dark. While the planned spring shows await visitors in empty galleries, the Hood staff is working to create a virtual presence to continue its teaching mission.

The same is true for the Hopkins Center for the Arts, says Mary Lou Aleskie, the Howard L. Gilman ’44 Director of the Hop.

While the Hop’s scheduled spring program has been put on hold for the near future, the arts center has created Hop@Home, which Aleskie calls “a virtual stage meant to recreate for the digital world all of the programs our community relies on the Hop to provide when we are all able to gather together live.”

While acknowledging that nothing can replace live performance, Aleskie says, “Much like the Hopkins Center itself, Hop@Home is a place to gather, share stories, celebrate our community and our students, and come together with some of the most acclaimed and creative artists of our time.”

Sourdough Dance-Offs and Small Screen Fun at the Hop

In the coming weeks, the Hop plans to announce three to five virtual events a week, including living room concerts with artists whose scheduled spring performances have been postponed, says Michael Bodel, the Hop’s director of external affairs. He urges people to visit the Hop@Home web page and sign up for email updates to find out more.

The first living room concert will feature Amir ElSaffar and four members of the Rivers of Sound Orchestra collaborating in real time from multiple locations at 8 p.m. Thursday, April 23.

Hop@Home programming includes digital film club #SmallScreenFun. Participants view the week’s selection on their own time, then join a live conversation with the filmmakers, Hop staff, and faculty experts. Next up: The Boy Who Harnessed the Wind, the story of how William Kamkwamba ’14 built a wind turbine for his Malawian village. Join a live discussion with Kamkwamba, Provost Joseph Helble, and others at 8 p.m. Tuesday, April 21.

The Hop has been screening watch parties of recent student ensemble winter concerts, including the Coast Jazz Orchestra playing Duke Ellington and Billy Strayhorn’s Such Sweet Thunder and the Dartmouth Symphony Orchestra performing Prokofiev’s Romeo and Juliet, which both featured live chats led by student performers.

There will also be programming for families and children, such as this weekend’s “Dance Party with DJ Sean”—30 minute family-friendly sets on Facebook Live April 17-18 (DJ Sean hosted a “Thursday Night Live” dance party for grownups on April 16).

The Sourdough Dance-Off is a crowdsourced social media event in which a new, one-minute dance is posted on the Hop website, Facebook, and Instagram each Monday. Dancers have until Wednesday at midnight to submit one-minute dances of their own, inspired by the original posting. The organizers will post a highlight reel and select their three top choices each Friday, so the audience can vote for their favorite, which becomes the new “sourdough” for Monday.

“The arts are more important to us than ever,” says Aleskie. “As many of us struggle through this pandemic with isolation and all of the ramifications of loss and distance, the arts are a common place where we come together to find our humanity. If, in the short term, we must find our togetherness through the arts online, then the Hop needs to be there to support our community in finding our common place.”

Art Talk at the Hood

Last week, the Hood launched a series of public webinars. In the first, Jessica Hong, the associate curator of global contemporary art, and Vivian Ladd, a teaching specialist, discussed “The Power and Impact of Images” and answered questions on a live chat.

This week, Professor of Studio Art Colleen Randall discusses her exhibition, “In the Midst of Something Splendid,” with her husband, poet and author Jeff Friedman. A May 13 webinar will focus “A Closer Look: Lily Spencer’s ‘The Jolly Washerwoman,’” led by Ladd and Barbara MacAdam, the Jonathan Little Cohen Curator of American Art. Other similar programming will be announced soon. (For updates, visit the Hood website and follow on Instagram, Facebook, and Twitter.)

“Any art educator will tell you that to make a recreation of a work of art, you have to really study it, so by the time you’ve made it, you’ve done the hard work of looking,” Stomberg says.

The Hood is also focused on delivering on its teaching mission, Stomberg says. Curators are working with faculty who had planned to bring classes to the Bernstein Center for Object Study to make sure they can access images objects they need to teach. And the museum has set up what Stomberg calls a “speakers bureau of all the expertise we have on staff,” so faculty can request, for instance, a curator to visit a Zoom session on printmaking or ancient art.

The Hood’s co-curricular course, “Museum Collecting 101,” in which students research and select a photograph for the Hood to purchase, is also in full swing.

“It turned out to be a good year to go online, because guest curator Jessica Hong, the associate curator of global contemporary art, didn’t want to limit the selection to New York galleries. By going online, students can visit galleries in Delhi, Shanghai, or Bogota,” Stomberg says.

At the same time, the student-led Museum Club is meeting weekly via Zoom to think up art-based events for their peers. And the Hood education staff is working on programming for K-12 audiences, such as an art-focused virtual story time.

“If there is a silver lining to this pandemic, it’s that people are re-upping their allegiance to the importance of art,” Stomberg says. “There will be new songs and plays and drawings and paintings that will come out of this. I think we will look back on this time, as we do the Depression era, as an amazing time for the arts.”