Mary Lou Guerinot reflects on the roots, and results, of her ecological inspiration. 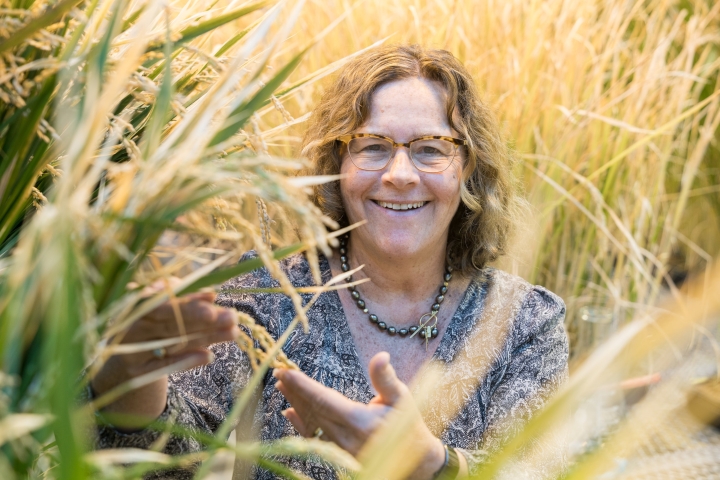 Mary Lou Guerinot, a professor of biological sciences, was a high school junior in 1970 when a substitute teacher, social unrest, and the first Earth Day celebration set her on a career path that has traversed several branches of science.

But whatever field she’s working in, her research reflects a common theme.

“I’ve always picked more ecological problems to work on,” says Guerinot, the Ronald and Deborah Harris Professor in the Sciences.  “I’m a molecular geneticist. I identify genes and figure out what they do, but I pick problems that I think will have an impact.”

Guerinot is a member of the National Academy of Sciences and a fellow of the American Association for the Advancement of Science and the American Society of Plant Biologists. In 2018, she received the Stephen Hales Prize from the American Society of Plant Biologists for her work as a world leader and educator in that field. Her discoveries, “made with her collaborative network, increase our understanding of plant biology, contribute to better farming practice, and offer the possibility of improved human nutrition,” the society said.

’It Just Seemed to Make Sense’

Guerinot’s interest in biology was first piqued by a substitute teacher.

The graduate student was “much more exciting and interesting than the nun who’d been teaching us,” says Guerinot, who attended an all-girls Catholic school in Rochester, N.Y. “And then Earth Day came along, and with all the antiwar stuff, and everybody protesting, it just seemed to make sense.”

The inaugural Earth Day came at a time when rampant dumping of pollutants had rendered two-thirds of the nation’s waterbodies unsafe for fishing or swimming.

The connection didn’t register with her back then, but in retrospect, she realizes that the effect of contamination of the Genesee River was visible near her home. “There were always dead fish on the beach.”

Intending to become a marine biologist, Guerinot earned a bachelor’s degree from Cornell University, followed by a PhD in marine biology from Dalhousie University, in Nova Scotia, where she worked on an issue affecting a vital local industry. Sea urchins were overgrazing the kelp, destroying the kelp beds and depriving lobsters of vital habitat, leading to a decline in the lobster population and fishery.

“There were a lot of us working on different parts of the problem,” she says.

Next, Guerinot did postdoctoral fellowships at the University of Maryland, researching marine nitrogen fixation, and at Michigan State University, in the Department of Energy Plant Research Laboratory, where she focused on nitrogen fixation associated with terrestrial plants. At the same time, she turned her attention to learning molecular biology, then an emerging field.

“It was an exciting time, and I decided I had an opportunity to switch and I did. It would be harder to do now, but at that time not that much was known,” she says, laughing.

’Eat Lower on the Food Chain’

Guerinot joined the faculty of the Department of Biological Sciences in 1985. She served as department chair from 1994 to 1998, as the associate dean of the faculty for the sciences from 1998 to 2001, and as vice provost from 2001 to 2004. She is a professor in the Molecular and Cellular Biology Graduate Program and the Microbiology and Molecular Pathogenesis Program.

Her genetic research work, funded by grants from the National Science Foundation and the National Institutes of Health, includes exploring ways to boost plants’ nutritional value, use less fertilizer, and remove toxins from the soil. For many years she has focused on iron uptake in plants.

She’s also working on figuring out how to get plants to grow in nutrient-poor soil, which would reduce the need for fertilizer and decrease pressure on more fertile land, including the Amazon, Guerinot says.

Her research also includes determining how to prevent arsenic from ending up in the part of grain that people eat, Guerinot says. The naturally occurring toxin has caused cancer in people living in places with high levels of arsenic in their water, including Bangladesh and parts of South America.

’Other Ways to Contribute’

Guerinot and her husband, C. Robertson McClung, the Patricia F. and William B. Hale 1944 Professor in the Arts and Sciences, often discuss climate change in their Emerging Infectious Diseases course, which they co-teach.

“We’re trying to keep pointing out all the different ways that climate change is going to be affecting things,” including where mosquitoes live, she says. “That’s where the malaria is.”

The students “keep me on my toes,” says Guerinot, who received Dartmouth’s Dean of Faculty Award for Outstanding Mentoring and Advising in 2015.  “They are excited about learning; they want to make a difference; and they are enthusiastic about contributing to sustainable solutions to the world’s problems. They ask great questions, and together we look for answers to those questions.”

And as they mull over their career choices, Guerinot uses her experiences to help guide them, sometimes in unexpected ways.

“When students want advice, I always tell them, ‘Well, my path wasn’t that straight. I started over here and then I switched,’” she says. “You just don’t have to go to graduate school in biology. There are other ways to contribute.”

’If Everybody Just Did a Little Bit More’

Guerinot had hoped Earth Day, celebrated annually on April 22, would draw the world’s attention to climate change this year. But due to COVID-19, it won’t be the “glorious 50th anniversary” organizers were hoping for, she says.

As part of its virtual commemoration, Earth Day Network is offering challenges individuals can tackle online and at home to combat climate change, such as switching to renewable energy and registering to vote, and other actions that bolster the organization’s ongoing campaigns, according to the network’s website. Those include Foodprints for the Future, which urges people to change their eating habits to support environmental and human health.

This appeals to Guerinot, who served on a National Academies panel that produced a report on the same issues.

“Science Breakthroughs to Advance Food and Agricultural Research by 2030” addressed a number of topics, including food waste, “a major issue,” she says, and animal production. “So much of the water that’s used in agriculture goes to produce animals, and a lot of the grain that’s grown is used to feed animals.”

Foodprints highlights the environmental cost of growing, transporting, and storing food, and how individuals and institutions can lessen their impact.

“I’m pretty excited about Beyond Meat and Impossible Burgers,” which can be used to replace a portion of the red meat someone might normally eat, says Guerinot. There’s hope for change, she says, “if everybody just did a little bit more, thought about it a little more.”