The fellowship is sponsored by the Carnegie Endowment for International Peace. 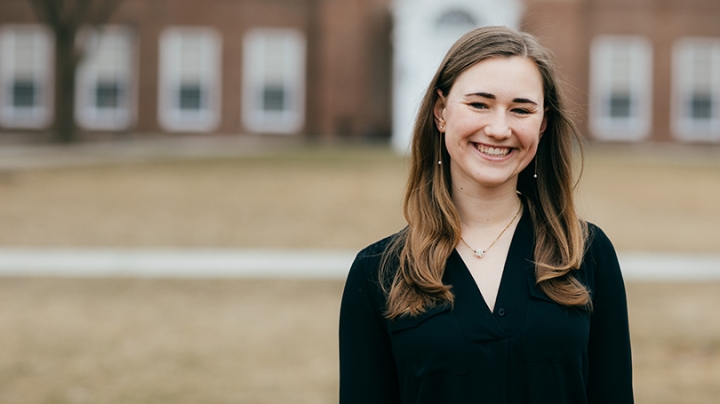 Grace Anderson ’20 says she has always loved research. “It’s like a puzzle, where you have to pull lots of different strands of information together." (Photo by Robert Gill)
4/07/2020
Body

Grace Anderson ’20 has been named a James C. Gaither Junior Fellow at the Carnegie Endowment for International Peace—one of about a dozen annually nominated from participating colleges and universities to conduct policy research alongside Carnegie’s senior scholars in Washington, D.C.

As a fellow, Anderson, a government major and Spanish minor from Chicago, will join Carnegie’s Domestic Foreign Policy and Diplomacy Program, where she will assist former U.S. deputy secretary of state and Carnegie Endowment president William Burns on research and writing related to current developments in foreign policy.

“Carnegie does fantastic international relations work,” Anderson says. “I wanted to work with Ambassador Burns because he has a wealth of knowledge and life experience not only with policy development, but with the implementation side—how things actually work.”

Anderson came to Dartmouth planning to major in biology, and continued to follow a premed track as a government major—a course of study she chose after an introductory course on international relations in her first year.

“I absolutely loved it,” she says. “The topics were things that really matter to people across the world, and I loved having debates with my peers. And I’ve always loved research—it’s like a puzzle, where you have to pull lots of different strands of information together.”

A seminar on “Lessons from America’s Foreign Wars” with Jeffrey Friedman, an assistant professor of government, “taught me how to write a long social science research paper in a concrete way. That was a big a-ha moment for me—I was like, wow, this is something I could do for a long time.”

With Friedman as her adviser, Anderson is currently writing an honors thesis on U.S. security assistance to foreign militaries.

Among other Dartmouth activities, she was a junior research scholar at the John Sloan Dickey Center for International Understanding’s Political Violence Field Lab.

“That was my first foreign policy research experience outside of a traditional paper for class,” she says. “It was more data analysis than I had ever done, and it was the first time that I was part of a long-term research project in a team.”

As an intern for the American Enterprise Institute in Washington, D.C., she researched the Al-Qaeda network’s influence in Somalia, reading and analyzing open-source intelligence from news media to Twitter feeds.

“In school you’re often taught to not rely on sources like Twitter, so it was interesting to see how sources like that can be valuable in terms of the insight they can provide on how people view events and live day-to-day. Even if it’s not accurate, it’s data,” she says. “We did a lot of data structuring and mapping of leadership networks and events. My science background helped me develop causal logic chains and spatial breakdowns of problems.”

Anderson is a certified emergency medical technician and wilderness first responder. She worked on the Dartmouth Emergency Medical Services crew because, she says, “I wanted real-world experience with patient care. That’s something I love about medicine and science—the opportunity to work with people.”

For similar reasons, she volunteers with the Sexual Assault Peer Alliance, which provides support to peers around sexual- and gender-based violence. “There’s a lot that is not intuitive about how to talk about these topics, and SAPA has given me concrete skills to help other people, which I’m really appreciative of,” she says.

She is also a member of the club tennis team, which she describes as “such a positive part of my experience here—some of my closest friends.”

The Carnegie Endowment is a global network of policy research centers in Russia, China, Europe, the Middle East, India, and the United States that “offers decisionmakers global, independent, and strategic insight and innovative ideas that advance international peace,” according to its website.

Of receiving the fellowship, Anderson says, “It’s super-exciting. This work is something I’m passionate about, and I’m grateful to have the opportunity to learn more, and to learn from such experts and amazing people in the field.”

Students interested in learning about the Gaither Junior Fellowships and other fellowship opportunities should visit Dartmouth’s Office of Fellowship Advising.