Internship at CDC Is ‘A Real Experience in Adulthood’ 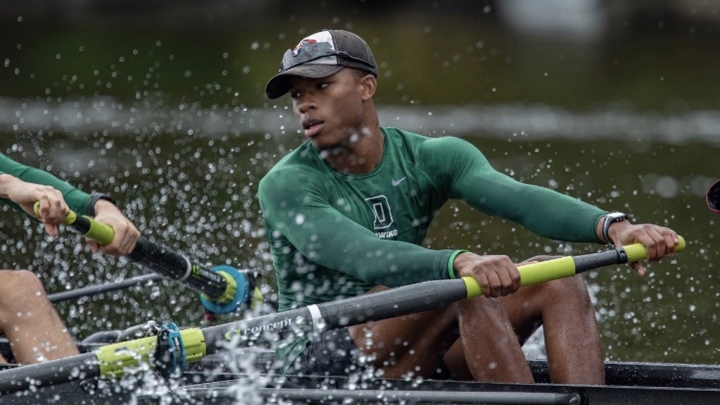 “It was a whirlwind,” says Michael Green ’21 of his internship at the CDC. (Photo courtesy of Dartmouth Athletics)
4/02/2020
Body

As Michael Green ’21 geared up for his internship with the U.S. Centers for Disease Control and Prevention, a friend and previous CDC intern shared a tip: He’d need to dig to find work to do.

That was before the spread of COVID-19, which consumed the bulk of Green’s winter internship and likely changed the trajectory of his life.

When Green reported for work in early January, his colleagues assured him the outbreak in China was an isolated event that would be quickly curbed. But soon, the disease’s rapacious spread became clear.

In Atlanta, Green had already found himself “truly alone” for the first time, contending with erratic public buses and seemingly endless rain, he said in an interview from his Maryland home. The pandemic, of course, compounded the situation.

“This is the worst thing I’ve been through, by far,” said Green, a rower who stayed grounded by talking with his parents and friends, focusing on the things he could control, and expressing himself in writing, including an essay for Dartmouth Athletics. “It was a real experience in adulthood.”

Initially, Green thought he might be in over his head at the CDC.

“What could a 20-year-old college student possibly help with at a federal agency loaded with professionals who have obtained terminal degrees?” he wondered. But he soon realized there were “a ton of areas” in which he could contribute, and that, overall, public health has not reached “anywhere near peak efficiency.”

The tasks Green tackled during his 10-week stint weren’t all glorious, but they were plentiful, the anthropology major says. “There was never a time when people didn’t need me to do something.”

“I’d have nightmares about stuff we were doing for the response,” Green said. “It was a whirlwind.”

Along the way, he marveled at how government agencies communicate during a time of crisis. Directives flowed into the CDC, which had to execute the orders even if it was unclear whether they would be effective, he said.

In fact, the importance of clear and effective communication and collaboration was his most vital takeaway, Green says. “The response to a pandemic takes the effort of everyone worldwide to understand their role in preventing the issue from escalating.”

And at the same time, along with his peers, Green watched his plans for the next several months disintegrate.

A member of Dartmouth’s heavyweight crew team and self-described “planner,” Green had been looking forward to spring training— and eating barbecue—with his team in Clemson, S.C. Then, the entire sports season was canceled, along with an upcoming summer internship that he’d been awarded after multiple interviews, and classes were moved online.

“Of course, as a Dartmouth student, I’m always going to want to achieve highly and have a plan (for the next step),” says Green. Yet having thought about COVID-19 “for 10 weeks straight” at the CDC helped prepare him for the upcoming changes, and helped him maintain perspective.

Green has his own concerns about the disease—he has asthma, and some of his relatives have diabetes, conditions that could create serious complications in people who contract COVID-19.

Yet he’s focusing on what he’s grateful for. “When there’s something in place like this that you literally have no control over, you have to take a step back and be like, OK, I have a roof over my head,” he says. “I still am a member of this institution, which lot of people don’t have the opportunity to go to.”

’The Path I’m Being Led Down’

Green entered Dartmouth unsure about his career goals. He worked as an intern at the Geisel School of Medicine, in Jeremiah Brown’s lab, and was awarded the E.E. Just Undergraduate Fellowship to continue his research there. At one point, he considered doing something related to biology, but he was skeptical about public health, and whether he would be able to have an impact in that field. Seeing the ravages of COVID-19 changed that.

“I wanted to think that as a nation we’d be able to handle something like this in an efficient manner and not have all these people getting laid off … and losing (their) lives,” he says. Green’s still holding out hope for a summer internship, ideally something he could do remotely, with the possibility of transitioning to an in-person experience, depending on what happens with the pandemic. “My primary interests are social determinants, health care access, and health care equity,” he says. He’s also interested in grant writing, environmental health, and journalism.

For the time being, however, he’s leaning toward a research career in public health, which aligns with his qualifications, Green says. “That’s kind of the path I’m being led down at this point, so we’ll see.”

Whatever he decides, he hopes to draw on his recent experiences for perspective on how to effectively lead and collaborate in high pressure situations, while keeping in mind the human toll.

“One of the main issues that I have noticed from leaders is a lack of empathy for people globally,” he says. “Even if you do not personally feel tangible devastation from an event, it still will be very present in many people’s lives. If you are advocating or making decisions as a leader, empathy is surely an essential trait.”