“It’s an honor that represents a lot of possibility,” says the undergraduate. 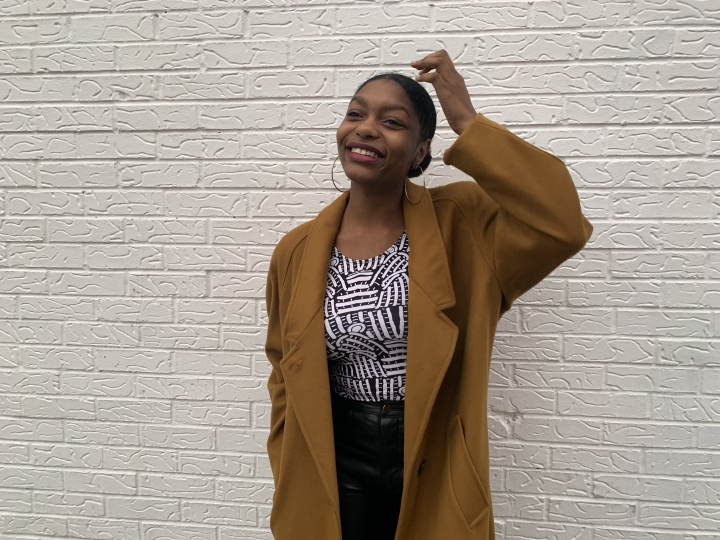 Jordan McDonald ’21, a history major and English and creative writing minor from Seat Pleasant, Md., has been named a Beinecke Scholar—one of 18 college juniors nationally to receive this year’s award.

“It’s an honor that represents a lot of possibility,” McDonald says of the scholarship. “Now I feel a lot more confidence that going to graduate school wouldn’t be a burden on myself or my family.”

McDonald’s academic interests include popular culture, art history, history, and creative writing, but she decided to major in history because of her work with Professor of History Bethany Moreton.

“I did an independent study with her my freshman winter. She saw how excited I was about what I was thinking about and gave me space—but also the kind of support and guidance that I needed,” McDonald says. “She’s the first person who told me about American studies—she was like, that’s what you do. That was the first time I realized it was OK to be interested in bringing different disciplines together.”

Moreton says McDonald “impressed me, from my very first conversation with her, as the kind of intellectual who will leave a mark on her field, and I am overjoyed to see her formidable accomplishments ratified by such a prestigious national award in support of her graduate studies.”

McDonald is a fellow in the Mellon Mays Undergraduate Fellows program, which supports students from minoritized backgrounds in pursuing careers in academia.

“Mellon gave me a specific environment to start thinking about graduate school, and people who could share opportunities and information with me—that was where I heard about Beinecke,” she says.

Through Mellon, she is working with Moreton and Joshua Bennett, an assistant professor of English and creative writing, on a project tracing “the history of the term ‘house slave’ as a slur in political rhetoric and contemporary art, particularly in a film and media context,” she says.

“Professor Bennett has been extremely helpful with this project, because even though I wanted to do rigorous historical research, I also wanted this to be a project that centered writing in terms of craft.”

McDonald discovered art history in a course on “American Art and Identity,” taught by Mary Coffey, an associate professor of art history.

“That class changed how I thought about art and history and gave me a good, rigorous framework for thinking about visual culture,” McDonald says. “Professor Coffey also encouraged me to get art research experience outside of Dartmouth. So I interned at the Smithsonian Archives of American Art. That gave me archival experience, which expanded my sense of the history I was interested in and what I could focus on.”

A freelance writer who has been publishing in journals such as Teen Vogue, Bitch Magazine, The Huffington Post, and others since high school, McDonald has continued to write at Dartmouth, on the staff of The Dartmouth, for which she served as art editor, and as editor-in-chief of Black Praxis—a digital revival of the more than 50-year-old journal of the Dartmouth College Afro-American Society. The journal had been intermittently dormant for several years until McDonald helped lead its reinvention online—publishing its second issue remotely during the first weeks of the spring term.

“We were working on this issue for two terms,” she says. “Even though we’re not on campus, it gives people an opportunity to see their work, and share that with friends. I think it can help people reconnect.”

Among her other Dartmouth activities, she is president of the a cappella group Music in Color. “That’s been an amazing support group, and also a powerful leadership opportunity,” she says.

She is also the historian and treasurer of the Afro-American Society, a member of the Hood Museum Club, and a former member of the Inter-Community Council.

The Beinecke Scholarship Program was established in 1971 by the board of directors of the Sperry and Hutchinson Co. to honor Edwin, Frederick, and Walter Beinecke. Since 1975, the program has selected more than 640 college juniors from 110 undergraduate institutions.