“Dartmouth will be open this fall,” said Provost Joseph Helble. 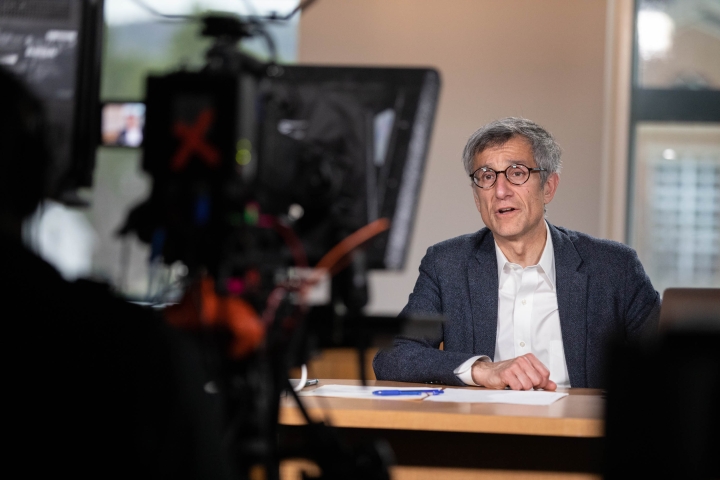 Dartmouth will announce by June 29 whether students will be able to return to campus for the fall term, Provost Joseph Helble said Wednesday afternoon during the first of a series of Community Conversations broadcast live from Dartmouth Library’s Starr Studio.

“Dartmouth will be open this fall,” Helble said, describing the three scenarios campus leaders are considering for the term that begins in September: a fully remote term, a fully residential term, or—most likely, he said—a hybrid of the two.

“The challenge for us to figure out in the next two months is the appropriate model that allows us to bring the maximum number of students safely back to campus,” Helble said, stressing that the priorities driving any decision include both protecting the “health, safety, and well-being of the community” and “ensuring the educational continuity for our students.”

Helble was joined on the webcast by COVID-19 task force co-chairs Lisa Adams, associate dean for global health and an associate professor of medicine at the Geisel School of Medicine, and Josh Keniston, interim vice president of campus services and vice president for institutional projects, who spoke from their respective homes.

During a live question-and-answer session moderated by Vice President for Communications Justin Anderson, who spoke from a room adjacent to the studio, Helble addressed Dartmouth’s financial predicament in the face of a pandemic-driven global economic downturn.

By the end of June, he said, Dartmouth expects to be facing a “roughly $100 million-dollar combined operating loss if you include the working capital portion for spring term and summer term alone.”

He stressed that making up the shortfall is not as simple as taking the funds from the endowment, which mostly consists of funds legally restricted to predetermined uses. The endowment currently contributes around $250 million to Dartmouth’s annual operating budget of more than $1 billion.

“The endowment is, in fact, not a rainy-day fund. It is funding that was provided to the institution over generations, with very specific purposes in mind,” he said. These funds “can’t be used to address institution-wide operational funding deficits.”

The issue is one of “intergenerational equity,” he said. “Dartmouth is the institution that Dartmouth is today because of the generous philanthropy of alumni and friends of generations past that was stewarded and protected and preserved.”

Asked about the possibility of job cuts, Helble reiterated that Dartmouth is committed to pay all salaries through June 30, and promised an announcement by early June on whether there will need to be furloughs or layoffs.

He said that Dartmouth’s leadership has not decided yet if it will apply for federal funds from the Coronavirus Aid, Relief, and Economic Security (CARES) Act. Dartmouth is eligible for approximately $3.4 million in funding. If Dartmouth were to accept the federal funds, he said, “we commit today to applying 100 percent of that to support students and student needs.”

Asked about programming for incoming students, such as first-year trips, orientation, and the First Year Student Enrichment Program, Helble said he expects to be able to announce a decision by early June, and hopes to announce recommendations for fall off-campus programs by mid to late May.

Keniston addressed what Dartmouth is doing to reunite students with possessions they left on campus at the end of winter term, saying that it would likely take through the summer to return most of the belongings to the approximately 3,200 students.

A plan for doing so is expected to be in place two weeks from now, he said, acknowledging that the logistical complexities of the issue were greater than initially anticipated. “We hoped this was not going to go on as long as it has.”

Adams described plans for Dartmouth to allow research activity to resume on campus beginning this summer.

“We have a research continuity working group that is actively exploring how to carefully and intentionally restore research activity on campus, including what practices need to be in place to preserve the health and safety of the community,” she said. “This is likely to occur in a staged or phased-in fashion.”

The weekly series will air Wednesdays at 3:30 p.m. for the remainder of the spring term as a forum for members of the Dartmouth community to ask questions and get updates from Helble and other campus leaders about the institution’s priorities, decisions, and operations during the COVID-19 pandemic. Next week’s broadcast will feature two faculty members as guests.

Wednesday’s live broadcast is available for viewing. Call-in numbers are available for community members who want to listen to the show without video. A link to the next broadcast, which includes the option to send in questions during the show, will be posted as soon as it is available.

Community Conversations is produced by Dartmouth’s Media Production Group and the Office of Communications. The show is broadcast from MPG’s Starr Studio in the Dartmouth Library’s Baker-Berry Library.