The award recognizes achievement in the sciences. 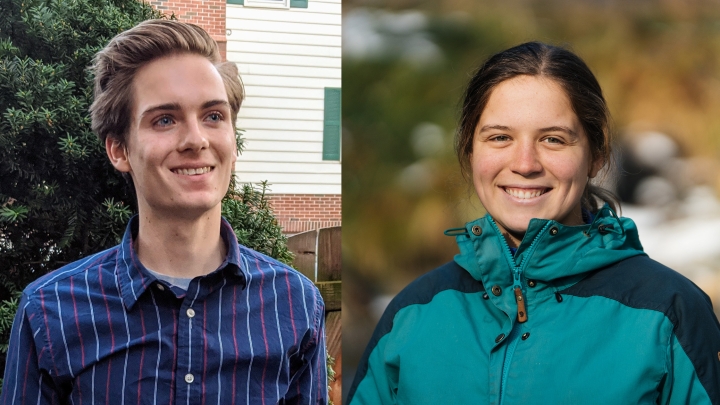 William Baxley ’21, a double major in neuroscience and computer science from Arlington, Va., and Shannon Sartain ’21, an environmental earth sciences major from East Setauket, N.Y., are among 396 undergraduates from around the country to receive Goldwater Scholarships this year.

The scholarship, named in honor of the late Sen. Barry Goldwater of Arizona, “seeks to identify and support college sophomores and juniors who show exceptional promise of becoming this nation’s next generation of research leaders” in the natural sciences, engineering, and mathematics, according to the program’s website. The program is among the oldest and most competitive of its kind in the United States.

“I’m drawn to neuroscience because it has so many unanswered questions,” says Baxley. “I find the idea of contributing something—however small—to human knowledge deeply meaningful and motivating.”

Receiving the Goldwater “has validated my plans to pursue a career in academia,” he says.

“Since receiving the award, I’ve been connected to the vibrant community of other recipients, some of whom have similar research interests. Hearing about their experiences and ambitions has opened my eyes to new possibilities.”

As an undergraduate researcher in the Contextual Dynamics Lab run by Assistant Professor of Psychological and Brain Sciences Jeremy Manning, Baxley has worked with a machine-learning technique known as “topic modelling” to model how people learn.

“Professor Manning has not only been supportive but has also treated me like a peer, empowering me to develop my own ideas and shape the direction of the project,” he says.

“Will has been a pleasure to work with in my lab, where he is helping to develop mathematical models of how students learn from online course videos,” Manning says. “I am incredibly proud of Will and his well-deserved receipt of a Goldwater Scholarship.”

This term, Baxley is working—remotely—with Assistant Professor of Psychology and Brain Sciences Matthijs van der Meer on a project related to learning and memory.

Outside of the classroom, Baxley is a computer science peer tutor in the Tutor Clearinghouse. “Explaining things to people is one of my favorite things to do,” he says. “And seeing my tutees improve, learn, and enjoy the class has been incredibly rewarding.”

An avid runner (“running is probably my most serious hobby,” he says), Baxley is a co-captain of the Dartmouth Running Team, through which he has found opportunities to compete and find community. He’s also a violinist in the Dartmouth Chamber Orchestra, for which he has served as concertmaster and co-manager, and a member of Zeta Psi.

“Dartmouth has exposed me to ideas and ways of thinking that were completely new to me,” he says. “Even though my interests lie solidly in neuroscience, one of the courses that’s had the greatest impact on how I view the world was on the economics of public policymaking. And some of the projects I’ve been most proud of have been essays. Dartmouth has helped me maintain academic breadth as I hone my area of interest.”

Of the Goldwater, Sartain says, “It’s validating to be recognized for research that’s intellectually rewarding to me.”

As a first-year student Sartain conducted research with the Carl Renshaw, a professor of earth sciences who studies the response of rivers and streams to human and natural disturbances, and earth sciences PhD candidate Evan Dethier, thanks to the Women in Science Project (WISP).

“Studying rivers is an awesome combination of geology and hard earth science and ecology, as well as human and sociopolitical issues,” she says.

With Dethier and David Lutz, a research associate professor in environmental studies, Sartain co-authored a study on the effects of gold mining on a Peruvian river system, published by the Proceedings of the National Academy of Sciences last year. She is a co-author on a second paper—on regional changes in seasonal extreme streamflow events in the U.S. and Canada—that has been submitted for publication.

“Shannon is an extraordinary young scholar with limitless potential, a fantastic attitude, and an insatiable appetite for knowledge,” Lutz says. “I am proud to have been able to work with her over the past two years and can’t think of a more deserving student for the Goldwater Scholarship. I’m so happy for her and look forward to watching her continued ascent as a scientist.”

In addition to support from WISP, Sartain has received research funding from the Neukom Institute for Computational Science and the Office of Undergraduate Advising and Research.

“The funding Dartmouth provides to undergraduates for research makes it easy. It’s never a question whether or not I’ll be able to be funded,” she says.

Sartain has held leadership roles in Cabin and Trail, led the Dartmouth Outing Club’s environmental stewardship division, and served as an undergraduate adviser for first-year students and for the Sustainable Living Center community.

She spent a summer as a field biology intern at Fire Island National Seashore, and plans to work this summer at the U.S. Geological Survey’s Grand Canyon Monitoring and Research Center—though that job may be postponed due to the COVID-19 pandemic.

She also participated in the Stretch, the earth sciences off-campus program, and the biology foreign study program in Panama, Costa Rica, and Little Cayman Island.

“I’ve been immersed in these incredible field science programs,” she says. “I don’t think the experience of learning about an ecosystem or natural processes can be replaced by classroom learning. They make going to Dartmouth worth it.”