The undergraduate wanted to contribute emergency-response skills he knew would be needed. 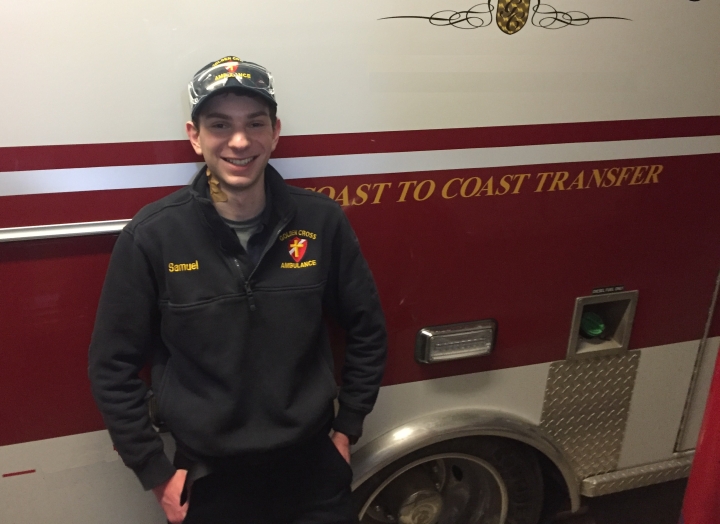 While most of his fellow seniors are at home, finishing up their Dartmouth careers online, Sam Greenberg ’20 has stayed behind in the Upper Valley to join the battle against the novel coronavirus, among other medical emergencies. As a part-time EMT working for Golden Cross, an ambulance service based in Claremont, N.H., he transports patients from their homes to hospitals, or from one hospital to another. And he puts in long days. A biology major and a Russian minor, he’s finishing up three demanding Dartmouth courses online: “RNA Biology,” “The Molecular Basis of Cancer,” and “Russia and the West.”

Greenberg first understood the potential scope of the virus in early February, long before it made headlines in the U.S. “It was still in China and had killed about 50 people,” he recalls. “People were saying it was just the flu. But I read in a news story that one of the people who died was a doctor who was taking care of infected people. And I thought, huh, that’s not supposed to happen if it’s a normal flu. That was the first time I was like, wait a second. This might be something different.”

Different enough, just a few weeks later, to close Dartmouth residences. But Greenberg, who lives in New York City, worried that if he went back home, where the virus was spreading fast, he might not be able to return.

More importantly, he wanted to contribute emergency response skills he knew would be sorely needed.

“We’re an important part of the Upper Valley health system because we take people out of the hospital when they get better and free up the bed,” says Greenberg. “If they’re really sick at a smaller critical-access hospital and not going to be able to get the care that they need there, then we take them to one of the bigger hospitals.”

Greenberg estimates that 10 percent of the patients he transports show symptoms of COVID-19, though he realizes the extent of infection in the community could be greater than that, since asymptomatic people who carry the virus rarely get tested.

So far, he feels fine. He always wears a mask and a gown, and removes and launders his clothes immediately after returning home from work. And speaking of home, finding one off campus hasn’t been easy. The landlord of the first place he rented after Dartmouth residences closed was concerned that he would transport the virus and asked him to leave. He now rents an apartment in Sunapee and stays in contact with his family via video conferencing.

“My mom, dad (David Greenberg ’90), and I do weekly Shabbat on Zoom,” Greenberg says.

Greenberg plans to spend next year applying to medical school while continuing to work as an EMT. He came to Dartmouth planning to go into medical research. With Wei-Lih Lee, a professor of biological sciences, he contributed to a study on the mechanisms of cell reproduction. But since then, he’s realized that he’d rather provide direct care to sick people on the ground than spend time in a laboratory.

“In emergency medicine, I want to participate directly in people’s lives—in the hardest parts of their lives, seeing the change we create as opposed to hoping that happens later down the line,” he says.

As for his neighbors in the Upper Valley, he has a message. “Not enough people I see at the grocery store are wearing masks,” he notes. “Please, stay home, or if you go out, wear a mask. It will make our jobs so much easier.”