From Hanover to home office: Professors share the struggles and rewards of going remote. 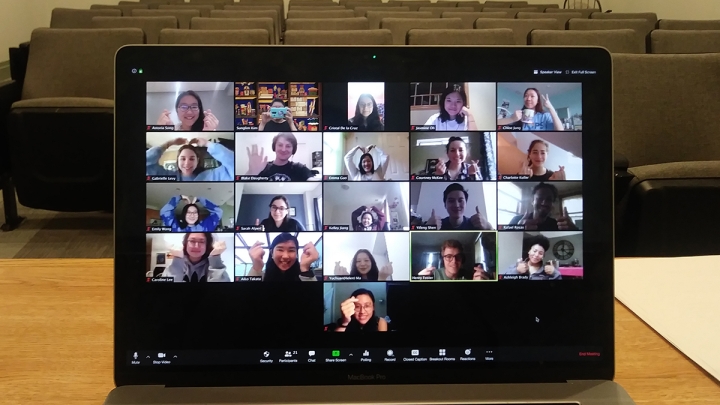 Spring term began full force after a quick but comprehensive ramp-up, thanks to dozens of departmental teams who collaborated with academic departments and programs to move classes online in response to COVID-19. From adjusting schedules, to revamping assignments, formats, and content, faculty members have made myriad changes to adapt their courses to the virtual environment. Dartmouth News recently checked in with three professors about the transition, and strategies they’re using to provide the most effective, engaging classes possible during this difficult and troubling time. 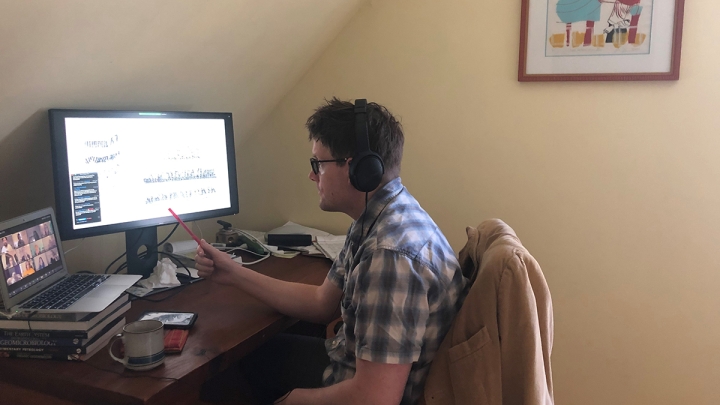 When the news hit that spring term would be online, William Leavitt turned to Twitter. Leavitt, an assistant professor of earth science and an adjunct assistant professor of chemistry and biological sciences, noted what his friends at institutions such as Harvard and the University of Arizona, which went online within just a few days, were doing to adapt. He felt grateful.

“At least I’ve got two weeks to plan,’” Leavitt remembers thinking, a timeline that was “kind of inspiring and also horrifying and daunting.”

The geobiology course he’s currently teaching is skill-driven, with a focus on reading and analyzing cutting-edge, primary literature or reviewing papers. Normally it comprises two or three lectures and a few journal discussions each week, but Leavitt adjusted the schedule soon after spring term started.

While he has “infinite respect” for his colleagues who are putting in enormous efforts to record their lectures, that wasn’t the best approach for him, says Leavitt, who is also co-teaching a graduate seminar this term. “I play well off of audiences. I knew I was going to come off flat.”

Instead, Leavitt turned to his far-flung network of colleagues, who have been happy to share their expertise through live online lectures.

The lead-up to those Friday morning talks starts on Monday, when students annotate a journal article penned by the guest lecturer, answering questions in a shared Google doc, where they can read one another’s responses. As they work, Leavitt fields questions in real time via Slack or Canvas.

Although it wasn’t easy to find a workable time—the 13-person roster includes students on both coasts and one in Turkey—they meet on Thursdays to discuss the article in small breakout groups and annotate the figures together over Zoom, using Hypothesis, an app offered through Canvas.

Leavitt polled the class about the format and learned they’re happy with fewer lectures and more discussion, and they appreciate the scientists who’ve been Zooming in from as far away as Scotland and Israel, Leavitt says. “It is fun, I think, for the students. They’re like, ‘Whoa, this person’s real.’”

Fortunately, except for the odd power outage, the students have been able to participate using their phones and laptops, says Leavitt, who’s working mostly from home in Plainfield, N.H. The location “up a gravel road, up a gravel road” means his sole choice for internet connection is DSL—slow, but generally stable, as long as he and his wife turn off their other devices.

But Fridays, when guests are coming in via Zoom, find him in his campus office, Leavitt says. “I don’t want to have a dropped connection.” 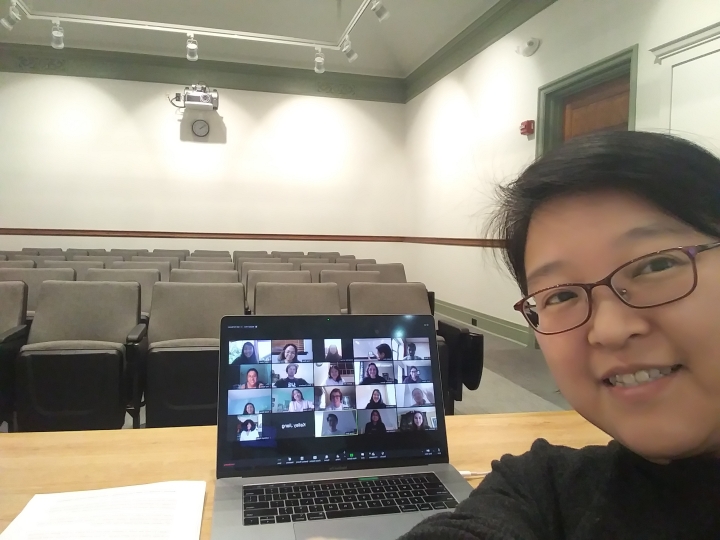 In the short lead-up to spring term, Sunglim Kim, an associate professor of art history, surveyed her students, asking about their locations and Wi-Fi availability, their goals for the course, and suggestions for remote learning.

“East Meets West,” one of two classes she is teaching this term, is scheduled to meet three mornings a week. But with two-thirds of the 24 students scattered across the United States, and the others in Asia and Europe, Kim was concerned about the time differences.

Initially, she tried several teaching methods, from narrated PowerPoint presentations, to small group discussions, to lectures on Zoom, either recorded or live. For a time, she gave the same lecture twice on class days, once at the regular time and once at 8 p.m. EST, for students in Asia.

Ultimately, she decided to give live lectures via Zoom at 11:30 a.m. EST, the original class time, accompanied by PowerPoint Open XML Presentations she uploads in advance.

The process is time consuming but it works well, says Kim. And surprisingly, the original class time draws the greatest number of students.

There are challenges—students sometimes have to contend with uncontrollable background noise and weak internet connections, says Kim. And she prefers classroom teaching, with its face-to-face interactions between herself and the class, and among the students themselves. But she’s finding workarounds.

For students who are unable to tune in to class, Kim provides one-on-one lessons, Zoom meetings that serve as her office hours. And since the online format can make it difficult for large groups to engage in constructive dialogue, Kim says, she assigns weekly writing assignments and requires students to correspond with one another about their work.

“That way they read other classmates’ responses and have some interactions with one another,” says Kim, who encourages students to respond to each other’s online posts. “While not the same as in-class discussion, it still gives students a chance to read about other students’ perspectives.”

And to put herself in the right frame of mind, she teaches from a classroom on campus. “Even though no student is there,” she says, “it gives me the actual class feeling.” 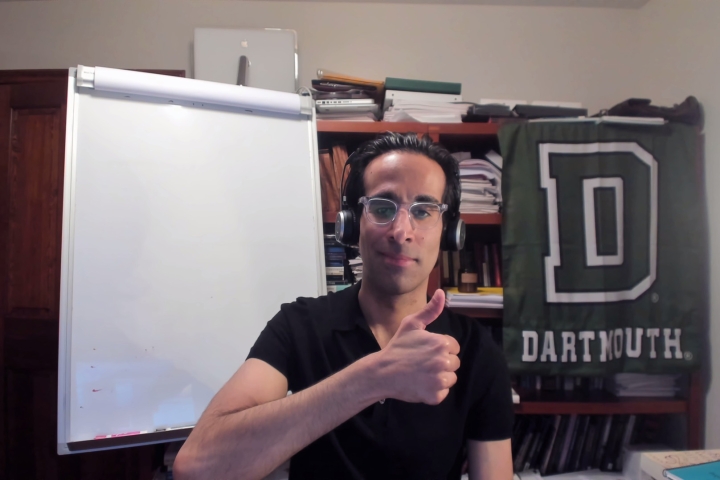 For his remote “classroom,” Sonu Bedi chose a banner to convey a message to students. “We’re still all Dartmouth,” says the associate professor of government and the Hans ’80 and Kate Morris Director of the Ethics Institute.

’We’re All Learning, and That’s OK’

At first, Sonu Bedi was uneasy about taking his classes online. “I’m very old school,” he says. “I use a chalkboard.”

To prepare, Bedi, an associate professor of government, the Joel Parker 1811 Professor in Law and Political Science, and the Hans ’80 and Kate Morris Director of the Ethics Institute, looked to resources unique to the remote learning environment, finding pedagogical silver linings, even in the uncertainty.

Since live online lectures don’t allow for the same interaction as a classroom, Bedi has been recording them in advance for his “Constitutional Law, Development, and Theory” class. The process has made him think more deliberately about the concepts he’s trying to convey.

“In class, I could spend my time moseying my way there. I could see what students were not understanding” and reframe the information, he says. But without that real-time feedback, lectures need to be even clearer.

That modification led to others, including a new assignment for students—written responses to those lectures and the accompanying slides. The papers enable Bedi to gauge understanding and plan weekly Zoom classes, which address students’ questions and include small group discussions held in online breakout rooms.

The adaptations have “a lot of pedagogical value,” he says. “So, that’s been quite nice.”

And, as it happens, current events have given the course, which explores state and federal decision-making powers, even greater relevance.

“The pandemic is revealing the federal nature of our system in a way that I haven’t seen, at least since I’ve been teaching this course,” says Bedi. Many of the issues they discuss in class, such as federalism and the role of the state and the national government, are now frontpage news, enabling him to advance the concepts of the course like never before.

And the students, who are watching the news closely, are more engaged than ever, Bedi says. “They’re quite impressive. They’re asking all these questions.”

Given the challenges of the term, he’s placed a premium on enjoyment.

People learn best when they’re relaxed and comfortable, so being at home can be a benefit, says Bedi, who encourages students to use the situation to their advantage.

“Just because it’s online doesn’t mean we can’t have fun with it,” he told his students. “You can listen to my lectures as if you’re watching a movie or something. Get yourself some Twizzlers. Enjoy yourself.”

He may be the one lecturing, Bedi says, but it’s vital, especially during these uncertain, anxiety-producing times, to remind students that they also have knowledge and experience to draw from. And that as they are finding their way, so is he.

“It gives us an idea that we’re all learning, and that’s OK, which I think can make us be more comfortable with uncertainty,” Bedi says.

As trying as uncertainty can be, it offers opportunities.

Being unsure about how something will go can open up space for learning, Bedi says. “Dartmouth students take to it.”