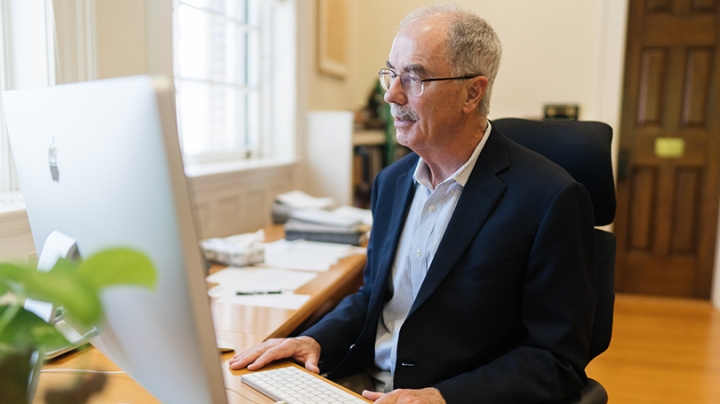 President Philip J. Hanlon ’77 participates in Community Conversations, joining in via Zoom from his office in Parkhurst Hall. (Photo by Eli Burakian ’00)
5/27/2020
Body

Dartmouth will soon be applying for the first portion of the approximately $3.4 million in federal funds it is eligible for through the Coronavirus Aid, Relief, and Economic Security (CARES) Act, President Philip J. Hanlon ’77 said during this week’s Community Conversations broadcast, a weekly online forum hosted by Provost Joseph Helble.

Hanlon and Laurel Richie ’81, chair of the Dartmouth Board of Trustees, joined Helble (speaking, as usual, from the Starr Studio in Dartmouth Library’s Baker-Berry Library) via Zoom—Hanlon from his office in Parkhurst, and Richie from her home in New York City. The three answered viewer questions in a conversation moderated by Justin Anderson, vice president for communications, who spoke from a room adjacent to the Starr Studio.

Anderson said he was hearing “a ton of interest” about when a decision would be made regarding this year’s first-year trips.

“We will have that decision announced by the end of this week,” Helble said, noting that the COVID-19 task force is currently putting the final touches on its recommendation.

Speaking about the June 14 virtual ceremony to confer degrees on graduating students—a celebration that will not replace an in-person commencement for the Class of 2020, to be held in June 2021—Richie said that all the trustees would be tuned in to the celebrations from wherever they are.

“I don’t know that we’ll all be in caps and gowns, but we’ll be there, and we’ll be participating, cheering the class on.”

Hanlon noted that the choice of speaker for the celebration—Khan Academy founder Salman Khan—accepted his invitation to speak back in November, well before the pandemic forced large public gatherings online. “It turned out to be a very timely choice, for sure,” Hanlon said. Khan Academy is a nonprofit organization dedicated to bringing free online classes to people worldwide.

Both Hanlon and Richie spoke about their efforts to stay engaged with the Dartmouth community during the pandemic, as well as their communication with leaders in higher education, business, and media as they consider Dartmouth’s future not only during this crisis but in the long term.

“It’s urgent that we take on not just how are we going to get through the next academic year, but what do we want Dartmouth to be in five to 10 years?” Hanlon said. “This is a moment when we’re doing a lot of thinking.”

Richie said she and other trustees have met via Zoom with the alumni council, the newly elected president and vice president of the student assembly, and other constituent groups.

“I know I speak for the board when I say that we have great passion for Dartmouth,” Richie said. “We are working hard to stay connected with all facets of the Dartmouth community.”

Hanlon has been holding virtual office hours on Zoom, sessions that are “jammed,” he said. “These calls are a great opportunity to let students know that I feel for them, and to give them an honest appraisal of the complex and uncertain situation that we find ourselves in. But also to express my confidence that our Dartmouth community, with all its creativity and resolve, will help us come through these turbulent times in a stronger place.”

And, he said, “I take great pride in Dartmouth being a place where the campus leadership has an open door to every member of the community. It’s a place where students can reach out and schedule a Zoom call with the president, and that doesn’t happen on very many campuses.”

Asked if Hanlon and others on the senior leadership team would be taking a pay cut as Dartmouth considers the budgetary challenges ahead in fiscal year 2021, the president said that “different members of the senior leadership team have voluntarily given back between 5 and 20% of their salary,” with Helble and Executive Vice President Rick Mills each giving back 20%. Hanlon himself has dedicated 20% of his salary to financial aid through his gift to the Dartmouth College Fund.

That gift supports Dartmouth’s urgent, renewed focus on financial aid through the Call to Lead campaign, a focus Hanlon announced last week, along with plans to expand the family-income threshold for a full-tuition undergraduate scholarship to $125,000, a renewed emphasis on annual giving, creation of a special scholarship bridge fund, an increase in Dartmouth’s endowed scholarships.

“We all know that financial aid is a timeless priority for the college,” Hanlon said. “But as timeless as it is, with the COVID-19 pandemic, it’s taken on even greater urgency as we’ve seen an enormous spike in students’ financial needs.”

Hanlon says he expects at least an $8 million deficit in the financial aid budget for the coming fiscal year. “Dartmouth will and must step up to meet the additional financial needs of our students,” he said. “The Call to Lead is one mechanism that can galvanize alumni and parent support and help us meet that end.”

Richie said that during her travels on behalf of Dartmouth last year, “One of the refrains in all of our conversations was that a family’s ability to pay should never ever get in the way of a student’s ability to enjoy the full Dartmouth experience. And that is true to our core.”

Several viewers asked whether students would be in residence during the fall term, a decision Helble said would be announced June 29. Hanlon offered some insight into the principles behind the fall term decision-making process. “To me, the three words I think about to guide my thinking are courage, caution, and caring,” he said.

Courage is necessary “to carry on the important work of Dartmouth College—preparing our students to lead lives of leadership and impact, and advancing the frontiers of knowledge,” he said.

Caution, because much about COVID-19 pandemic is unknown and uncertain, from the disease’s trajectory to when there might be an effective vaccine or treatment.

“Given all of this uncertainty, we must plan cautiously to put in place testing, physical distancing, and isolation protocols for the coming terms—as well as the ability to nimbly embrace alternative directions should the situation require,” he said.

Finally, he said, “One of the very distinctive features of the Dartmouth community is how much we care for each other and look out for each other, especially the most vulnerable.”

Community Conversations is a weekly online forum for members of the Dartmouth community to ask questions and learn from campus leaders about the institution’s priorities, decisions, and operations during the COVID-19 pandemic. Next week, on June 3, the discussion will focus on Dartmouth’s operations as the institution begins to make decisions about its budget and about fall term, Helble said.

Community Conversations is produced by Dartmouth’s Media Production Group and the Office of Communications.