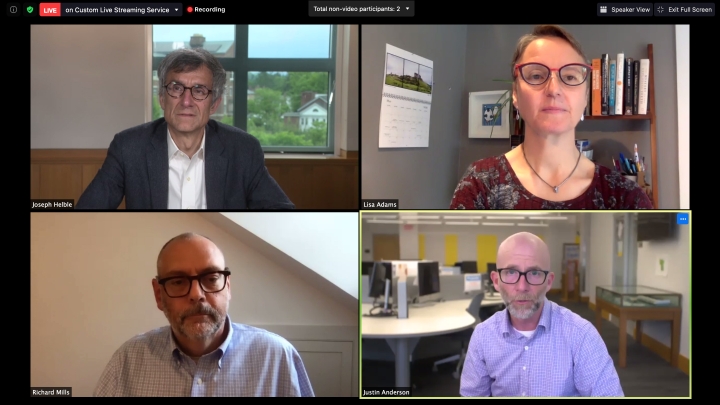 Provost Joseph Helble began the June 3 Community Conversations broadcast by acknowledging that this has been “an extraordinarily challenging week for our country”—a reference to the protests against racism and police brutality that have captured the attention of the nation and the world.

Citing a May 31 community email from President Philip J. Hanlon ’77 that condemned “the deplorable acts of violence against black men and women, and the structural forms of racism that lead people of color to disproportionately shoulder the burdens of poverty and inequality,” Helble said the events of the past week have led him to ask himself what he—and Dartmouth—can do better “to make sure every student on this campus, every member of the faculty, every member of the staff is welcomed, supported trusted, respected, and honored as an individual.”

Helble then turned to discuss more operational matters—the purpose of the Community Conversations series—and announced that Dartmouth is extending its commitment to pay all employee salaries through July 31. Previously, the institution had committed to paying salaries through the current fiscal year, which ends June 30.

The decision gives Dartmouth time to finalize its operational decisions about the coming academic year, which will be announced by June 29, he said. “Given that we will not be making decisions on fall term until the end of June, and given the link between operations and budget, we are extending that broad commitment for another month.”

Executive Vice President Rick Mills, one of the guests on the broadcast, said he understands employees’ anxiety about the future. As administrators and the COVID-19 task force consider different models of education for fall term, they are at this point uncertain about fall staffing levels.

“A lot of our planning is trying to see where those different elements of uncertainty resolve in terms of how many students do we have back? How rapidly are we ramping up, what does the campus look like in the fall? What do we need to be ready to staff for? And I think once we know some of those parameters, we’ll have a clearer picture of what the forward future looks like in terms of financial circumstances and employment.”

Helble discussed the Office of Admissions’ announcement today making standardized test optional for applicants to the Class of 2025. The decision comes follows an advisory from the College Board, which administers SAT tests, warning of the challenges of providing safe testing facilities to students in densely populated cities.

“To clarify, optional truly means optional,” Helble said. “We do not want anyone to engage in a guessing game as to whether it will be better to submit a test score. We will not report test scores for the matriculating class of 2025.”

In addition to Mills, Helble was joined by task force co-chair Lisa Adams, associate dean for global health and an associate professor of medicine at the Geisel School of Medicine. Adams and Mills spoke via Zoom from their homes.

The three discussed the state of the pandemic in New Hampshire and how that is affecting budgetary decisions for fiscal year 2021 and plans for the upcoming academic year, and answered viewer questions in a conversation moderated by Vice President for Communications Justin Anderson, who spoke from a room adjacent to the Starr Studio in Dartmouth Library’s Berry Library, where Helble was situated.

Adams, an expert in infection diseases, offered some good news: “Data from New Hampshire and Vermont have shown that both states have essentially flattened their epidemiological curves.”

The promising trend reflects the community’s adherence to prevention guidelines, she said. “All of those things that we’ve been doing in the Upper Valley—staying at home, wearing face coverings—all of those things have worked.”

In considering whether to allow undergraduate residential life to resume on campus, Adams said Dartmouth is in the process of developing a “robust model” for testing faculty, staff, and students for COVID-19 and managing contact tracing. But she emphasized that until there is a vaccine, no amount of testing or contact tracing is a replacement for behavioral changes.

“As we think about welcoming more people back to our campus community, I want to think about the social contract that we need to be making about how we take care of each other,” she said.

Other topics Helble and his guests addressed:

Community Conversations is a weekly online forum for members of the Dartmouth community to ask questions and learn from campus leaders about the institution’s priorities, decisions, and operations during the COVID-19 pandemic.

The show is produced by Dartmouth’s Media Production Group and the Office of Communications and airs Wednesdays at 3:30 p.m. Past episodes are available on the Community Conversations site, which includes call-in numbers for those who want to listen to the show without video. Find out how to watch or listen to the broadcast.

Next week, June 10, there will be no broadcast as Dartmouth prepares to celebrate the graduates in the Class of 2020; Community Conversations will resume June 17.