A working group will consider new designs and other iconography across the institution. 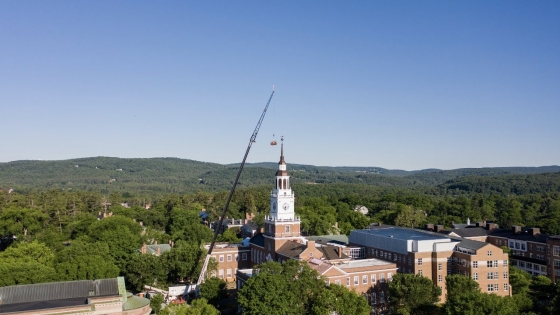 In a matter of hours Dartmouth today removed from the top of Baker Library Tower the section of the weather vane that President Philip J. Hanlon ’77 has said represented an offensive portrayal of a Native American.

The copper weather vane, designed nearly 100 years ago during the construction of the tower, depicts a Native American man sitting on the ground in front of Eleazar Wheelock, the Congregational minister who founded Dartmouth in 1769. The Native American man is wearing feathers and smoking a long pipe. Behind Wheelock stands what is likely a barrel of rum.

Temperatures hovered around 50 degrees as contractors started the removal process early this morning, working inside a fenced area in front of the library where a drainage project is underway. Wearing hardhats and bright yellow safety vests, they assembled a crane that had arrived yesterday in pieces on two flatbed trailers. Then, they attached counterweights to the crane, which was extended to 250 feet in order to reach the weather vane, 200 feet above the ground. The crane’s engine rumbled softly as the basket, suspended on a thick cable, was lifted three times to the top of the tower, starting with a trial run. 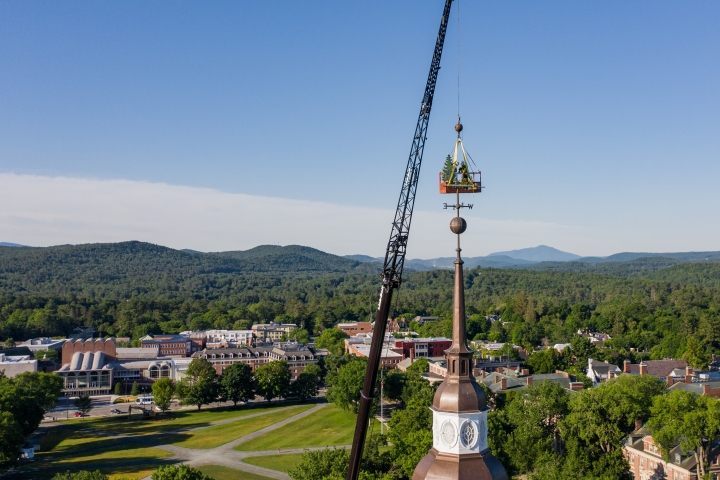 Following the trial run, two workmen stepped into the orange metal basket, which the crane operator maneuvered to within reach of the weather vane. They secured to the outside of the basket the section that includes the two figures, the barrel, and an evergreen tree, and by 7:30 a.m., the 300-pound structure had been lifted from its perch atop the directional and lowered to the ground, where it was placed in a crate, to be stored by the Hood Museum of Art. Returning once more to the tower, the contractors slid a copper sleeve over the post upon which the section of weather vane had sat.

Throughout the morning, a handful of passersby stopped on the Green to snap photos of the process or simply stand in the sunshine and observe. One man, his small white dog nestled beside him and his cell phone in hand, sat with his back against nearby Webster Hall, watching the work progress.

Ten days ago, announcing that the weather vane would be replaced, President Hanlon said he shared concerns raised recently by students and other community members about the imagery on the structure, which he said did “not reflect Dartmouth’s values.” 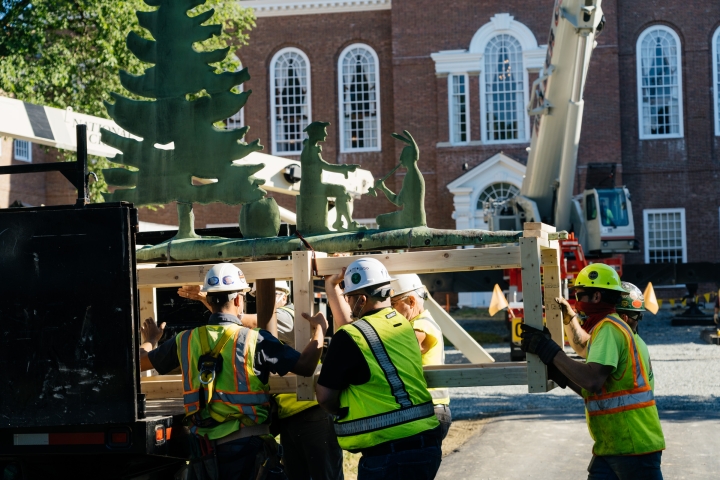 The institution is tremendously proud of its historic, although sometimes flawed, commitment to welcoming and educating its accomplished Native American students, Hanlon said. “We are equally proud of the contributions Native Americans have made to Dartmouth’s founding and to the current strength and distinctive character of our institution.”

Although Wheelock established the College as an institution to educate Native Americans, and Samson Occom, a Mohegan Indian and one of Wheelock’s first students, was instrumental in raising the funds needed to found the College, Dartmouth for its first 200 years fell short of its goal.

As part of a review process, Vice President for Communications Justin Anderson will assemble a working group to consider designs for a new weather vane and whether other changes in iconography across the institution are necessary. The group will report its recommendations to Hanlon.