President Hanlon: The design includes images that do not reflect Dartmouth’s values. 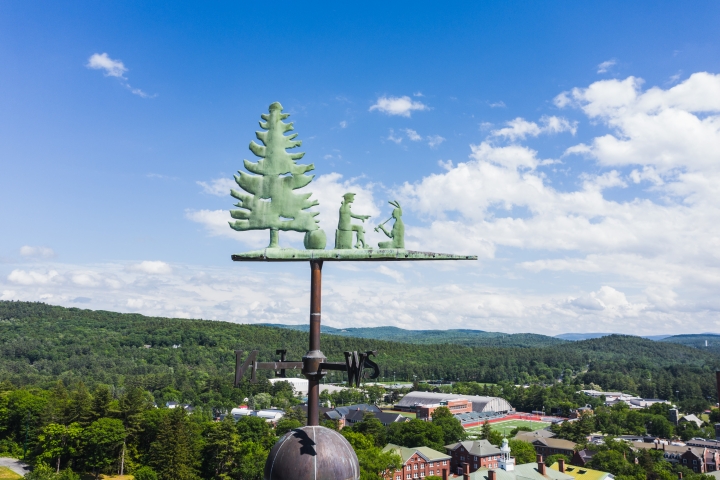 The 600-pound weather vane, the design for which is nearly a century old, has design elements that are offensive to many, and it will be replaced. (Photo by Robert Gill)
6/15/2020
Body

The 600-pound weather vane, the design for which is nearly a century old, portrays a Native American, wearing feathers and smoking a long pipe, seated on the ground in front of Eleazar Wheelock, Dartmouth’s founder. A round shape behind Wheelock is presumed to be a barrel of rum, according to Dartmouth historical records.

“It is clear that the images portrayed on the weather vane do not reflect Dartmouth’s values,” President Hanlon says.

“Recently, students and other community members have raised concerns about the imagery on the weather vane, and I share those concerns. We are tremendously proud of our historic—although at times flawed—commitment to welcoming and educating our accomplished Native American students. We are equally proud of the contributions Native Americans have made to Dartmouth’s founding and to the current strength and distinctive character of our institution.” 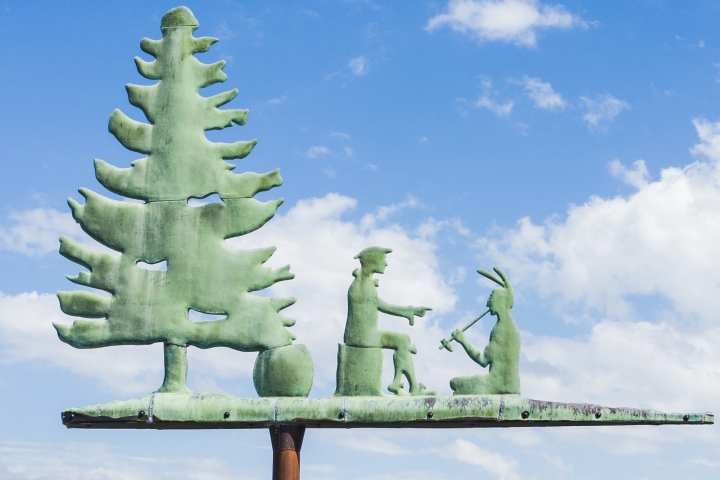 At almost 7 feet tall and 9 feet long, the weather vane stands 200 feet above campus. Its design was the result of a contest held during the construction of Baker Tower in 1928.

Recommendations for a replacement will come from a working group whose members will consider new designs for the weather vane and also whether iconography across the institution needs to be changed. Hanlon has asked Vice President for Communications Justin Anderson to organize the review process, including assembling working group members, who will give their recommendations to Hanlon.

“Baker Tower, which sits on top of the library, in the center of campus, is a powerful symbol of our commitment to learning and academic excellence,” said the president. “From bottom to top, it should reflect our values.”

The Guarini School for Graduate and Advanced Studies recently adopted a shield that features Baker Tower, including a representation of the weather vane. The shield will be modified to reflect whatever change is ultimately made.

Wheelock, a Congregational minister from Connecticut, established the College 251 years ago as an institution to educate Native Americans. Samson Occom, a Mohegan Indian and one of Wheelock’s first students, was instrumental in raising the funds necessary to found the College.

In the years since Kemeny made his promise, Dartmouth’s commitment to that pledge has remained strong. More than 1,200 Native Americans and Alaskan Natives, representing over 200 tribes, have attended Dartmouth, which has the highest number of Native American students, and has graduated more Native Americans, than any of its Ivy League peers.