The professor of history discusses the protests sparked by the killing of George Floyd. 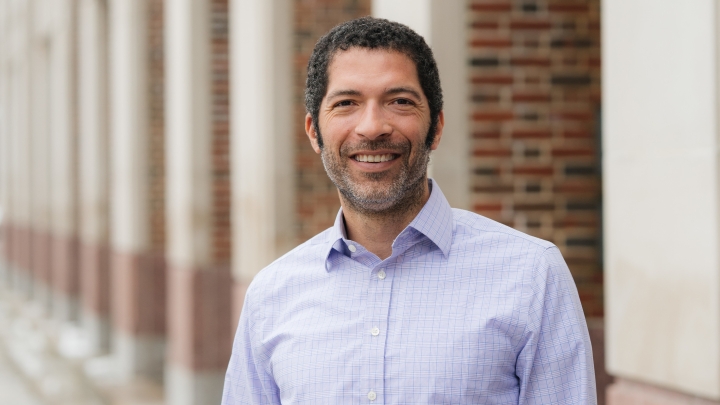 Professor Matthew Delmont tells his students that they are “living through a historical moment that will shape the future of the country and will be taught in history classes for the rest of their lives.” (Photo by Eli Burakian ’00)
6/10/2020
Body

Matthew Delmont, the Sherman Fairchild Distinguished Professor of History, spoke this week with Dartmouth News about the uprisings in the wake of the killing of George Floyd and other black men and women at the hands of police, the ensuing protests against police violence, and demonstrations in support of the Black Lives Matter movement.

“If you don’t think the justice system is going to bring justice, then you start to look for other approaches,” says Delmont.

The following is a transcript of the conversation.

You’ve been writing about race riots in the 1940s and the struggle for civil rights in the ’60s and you seem to say that a lot has been said—what you call the “hearts and minds” approach—but not much has been done. Are we looking at today’s struggles in the wrong way? Is this more of the same struggle decades on?

Yes, this is a new phase is a very long fight against police violence against black people. In order to see today’s struggles clearly, I think it is important to listen carefully to what activists and protestors are saying. There is righteous anger over black people being killed by police and by white citizens who feel authorized to act as though they are the police. And there is righteous anger over the policies, rooted in anti-black racism and white supremacy, that allow this violence to continue year after year, generation after generation.

You’ve talked about protests and riots as the next chapter in tactics people felt they had to use. Can you elaborate?

As Martin Luther King, Jr., famously said in 1967, “A riot is the language of the unheard.” I think the uprisings America witnessed in the first days of these protests were an outpouring of anger and frustration over the video of George Floyd’s murder, as well as the killings of Breonna Taylor and Ahmaud Arbery. If you don’t think the justice system is going to bring justice, then you start to look for other approaches. Now that the protests have continued for two weeks and have remained largely non-violent during that time, I would say that protestors recognize that they have power when they make their voices heard. And the protests have been successful in that regard. I don’t think the Minneapolis City Council would have vowed to dismantle the existing police department without these massive and ongoing street protests.

How do the COVID-19 pandemic, the swift economic slump, and the 24-hour news cycle contribute to what is happening now? Could these factors lead to a different outcome than during earlier times of protest and unrest?

I think COVID-19 and the economic crisis added fuel to the fire. Researchers won’t know how all these factors worked together for some time, but I suspect they will find that a large swath of Americans felt like the government was failing at its basic responsibilities and that George Floyd’s killing pushed a lot of people to action.

What do you think will happen in the coming months?

Honestly? I think the media cycle will change in a month or two and for many Americans police violence will go back to being a back-burner issue. It will still impact black and Latinx communities every day, but it won’t get the kind of attention it is right now. What I hope will happen, though, is that people will maintain the sense of urgency they feel right now and will keep police violence as a high-priority policy issue.

What are you telling your students about this time in their lives?

That they are living through a historical moment that will shape the future of the country and will be taught in history classes for the rest of their lives. I try to remind them that history is important because it can help us get our bearings, help us understand how we got here, and help us chart a better path for the future. But I also remind them that history can’t predict the future.

Whether this is a turning point or not depends on all of us and the actions we do or don’t take. I hope if we reckon honestly with the history of racism in our country, we can harness the political and moral will to enact policies that end police violence.