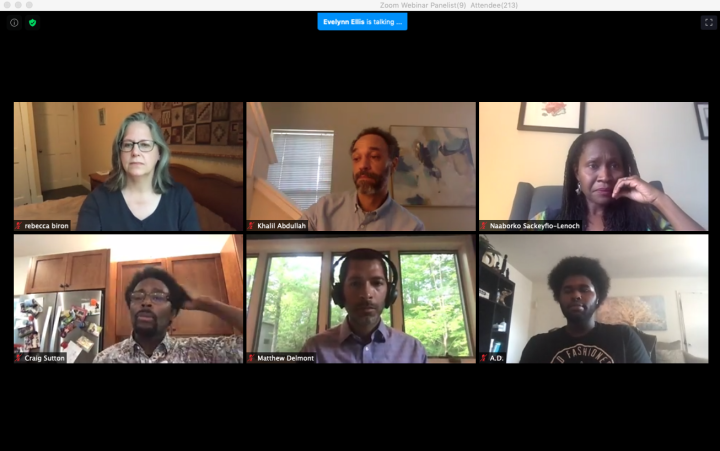 Nearly 300 members of the Dartmouth community—faculty, students, and staff—last Thursday joined the first of what organizers hope will become a series of Zoom conversations to discuss the protests against police violence that have erupted nationwide and around the world in the wake of the May 25 killing of George Floyd in Minneapolis.

“Our goal was simply to create space to connect and share in the face of an American tragedy,” says co-organizer Associate Professor of Mathematics Craig Sutton, who serves as house professor of School House and as director of the E.E. Just Program, which supports underrepresented students in pursuing careers in STEM fields.

Sutton, who moderated the event—billed as an open, Quaker-style conversation—says the virtual gathering was made all the more urgent because the global COVID-19 pandemic has forced the geographic dispersal of the Dartmouth community.

“Our need to connect has been heightened by living in this world of social distancing, where it is harder to feel the pulse of our communities,” he says.

Co-organizer Rebecca Biron, director of the Leslie Center for the Humanities and a professor of Spanish and comparative literature, says, “We were looking to provide a forum for the Dartmouth community to come together to share their feelings, thoughts, and experiences in this moment of turmoil.”

Graduating senior Armond Dorsey ’20 spoke of countering narratives in which “black lives only seem to matter most in death.”

Khalil Abdullah, the Muslim and multifaith adviser at the William Jewett Tucker Center for Spiritual and Ethical Life, spoke and then led two minutes of silence for Floyd, Breonna Taylor, and others killed by police violence, after which the meeting opened to other participants to comment and ask questions.

Sutton says he was struck by “the willingness of the panelists and attendees to be vulnerable in a moment when our thoughts, emotions, and energies are aswirl, searching for a mooring. I was encouraged that the event appeared to reach beyond the circle of Dartmouth’s most vigilant guardians of social justice. Even though the event was mediated via Zoom, you could sense an urgency to make this moment different from the numerous other times life has been snatched from a black person. It rekindled hope.”

Biron says the June 4 event “came about through the convergence of several people and centers who had the same idea at the same time and joined forces to organize the event very quickly.”

The organizers are planning ways to continue the conversation in another session—to be announced soon—and possibly in a summer-long series.

“I was moved and encouraged by the Dartmouth community’s determination to end anti-blackness, and racism more generally, in all that we do as an academic institution,” Biron says. “We all felt inspired to keep finding ways to do that, individually and institutionally. We will organize more conversations like this one.”

Sutton agrees. “We hope to continue providing space where members of the Dartmouth community feel comfortable sharing as the spirit so moves them, and also creating space out of which concrete plans and actions can arise,” he says. “I’m looking forward to continuing to collaborate with students, faculty, and staff on other such events.”

In addition to Sutton and Biron, co-organizers of Thursday’s event include Abdullah and Rabbi Daveen Litwin, dean and chaplain of the Tucker Center; Joel Parker 1811 Professor in Law and Political Science Sonu Bedi, the Hans ’80 and Kate Morris Director of the Ethics Institute; Sackeyfio-Lenoch, an adviser for the Shabazz Center for Intellectual Inquiry; and Associate Professor of French and Comparative Literature Andrea Tarnowski, associate director of the Leslie Center.