The provost and guests discussed closing budget gaps and preparing for a safe fall. 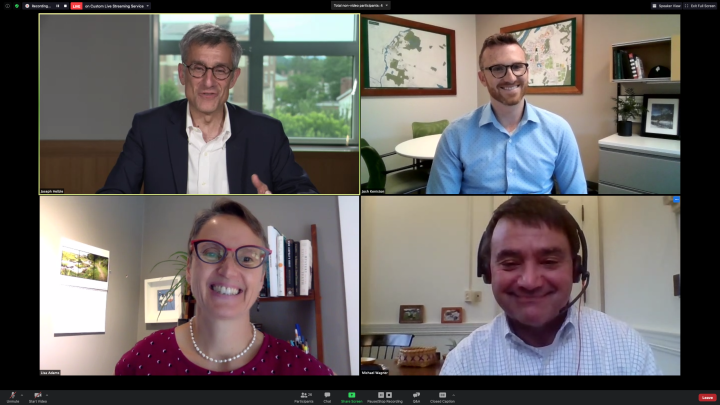 Dartmouth’s budget shortfall for fiscal year 2020 was substantially less than initially projected, closing with a $36 million loss rather than the $50 million gap that institutional leaders had projected in March, Provost Joseph Helble said during Wednesday’s Community Conversations webcast, a live discussion about Dartmouth’s operations during the COVID-19 pandemic.

Calling the deficit “still substantial, but one-third less than we had projected when we first met,” Helble said that philanthropy, better-than-expected performance of the financial markets, and steps the community took to reduce non-compensation expenses had made a tremendous difference.

Speaking from the Starr Studio in Dartmouth Library’s Baker-Berry Library, Helble said that because of all these factors, “We were able to bring fiscal year ’20 to a successful close.”

The picture for the 2021 fiscal year, which began July 1, also looks much better than it did, Helble said. Initial projections showed a potential $100 million shortfall for a budget of about $1.1 billion, but salary and hiring freezes, the recently announced early-retirement program, further non-compensation spending reductions, and use of a revenue stabilization reserve fund established by President Philip J. Hanlon ’77 early in his tenure have come close to balancing the budget.

To close the gap further, Helble said that division leaders this week received revised budget targets for the year, and in the coming weeks there will be opportunities “to engage individuals from all divisions across campus in some creative cross-institutional thinking to seek more efficient ways to accomplish our work.”

That said, Dartmouth will not extend its commitment to pay all salaries beyond the previously announced date of July 31. Helble acknowledged that some jobs may be cut on a division-by-division basis—although leaving vacancies unfilled, the early-retirement program, and other efforts will help mitigate the need for such measures.

“It will not be widespread, it will not be pan-institutional,” he said of potential layoffs. “I understand that these next steps create some anxiety, but our intention in trying to provide targets that are achievable significantly through means other than through compensation will reduce the impact and the number of any employment adjustments that need to be made.” Further details will be announced within the next month, he said.

Joining Helble via Zoom from his office in Parkhurst, Chief Financial Officer and Vice President for Finance Michael Wagner said that most of the shortfall from the fourth quarter of the past fiscal year came from the loss of about $15 million in expected room and board revenue during the spring term.

But the year ended better than anticipated thanks to cooperative financial markets and the work of the Dartmouth College Fund. “The volunteers and the Advancement staff really worked miracles in terms of bringing that in close to expectation for the full year,” Wagner said.

He said that in the coming year, Dartmouth expects to spend approximately $15 million in expenses related to COVID-19, including testing, personal protective equipment, classroom technology, and health management tools.

Asked how other colleges and universities facing COVID-19 related shortfalls are approaching the challenge, Wagner noted that while many of Dartmouth’s strategies are similar to its peers, unlike many other institutions, Dartmouth has no plans to cut employee retirement contributions for the current fiscal year.

On this point, Helble said he was “pleased with the way different groups in the community came together to weigh in” against that option. “It was an extraordinary demonstration of the Dartmouth community.”

Helble was also joined by COVID-19 task force co-chairs Lisa Adams, associate dean for global health and an associate professor of medicine at the Geisel School of Medicine, and Josh Keniston, vice president for institutional projects, who spoke from their homes. Helble and his guests took questions from viewers in a conversation moderated by Vice President for Communications Justin Anderson, who spoke from a room adjacent to the studio.

Asked about the recent surge of COVID-19 cases nationally, Adams said, “This is what exponential growth of an epidemic looks like, and it’s always harder to play catch-up once spread starts.” She said that Dartmouth is monitoring the numbers closely and is prepared if need be to shift its plans for the coming term to protect the health and safety of the community.

“One concrete example I can give of how this national data has affected our planning is we are now carefully exploring options for pre-arrival testing of undergraduate students” in addition to the testing students will need to do when they get to Hanover, Adams said.

She also spoke about the plans to institute 14-day quarantines for arriving students. A newly formed student advisory group consisting of a dozen students from the classes of 2021, 2022, and 2023 will be giving input on how to make that a manageable experience for those in residence during fall term.

Keniston spoke about the challenge of reconfiguring building spaces to conform with rapidly changing health requirements. In many Dartmouth facilities “the systems and processes we have in place have been developed over decades,” he said. “Now we are having to reinvent them in a matter of weeks.”

Keniston also spoke about progress toward returning student belongings left on campus at the end of winter term. “We are making good progress and really driving toward having this wrapped up by the middle of August,” he said.

Among other topics discussed in Wednesday’s episode:

Community Conversations is an online forum for Dartmouth community members to ask questions and learn from campus leaders about the institution’s priorities, decisions, and operations during the pandemic. The live discussions, produced by Dartmouth’s Media Production Group and the Office of Communications, air on selected Wednesdays at 3:30 p.m. The next webcast is set for Aug. 5.

Past episodes are available on the Community Conversations site, which includes call-in numbers for those who want to listen to the show without video. Find out how to watch or listen to the live webcast.

For the most recent information on Dartmouth’s response to the pandemic, visit the COVID-19 website.