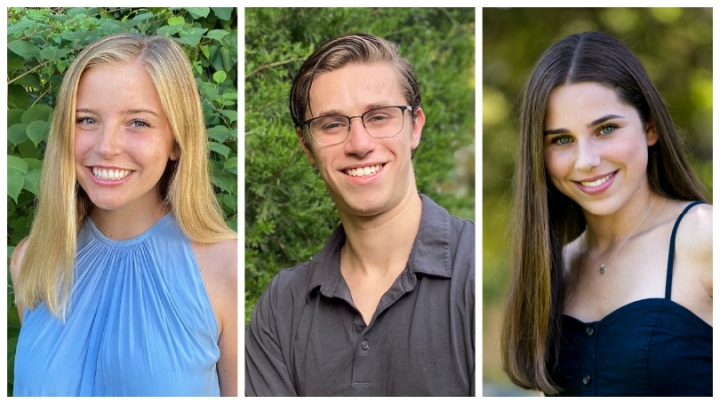 Research on how unsubstantiated claims of voter fraud affect public confidence in elections, co-authored by Professor of Government Brendan Nyhan and three undergraduates, is attracting a lot of attention in the media as attacks on the integrity of the 2020 election intensify.

The paper (PDF), which was also co-authored by four leading political science and communications scholars from Princeton, Washington University at St. Louis, the University of Utah, and the University of Exeter in the U.K., finds that baseless claims of voter fraud erode confidence in the democratic process, and that once that distrust takes root, fact checking sometimes fails to counter it.

The paper has attracted attention from many major media outlets, including the PBS Newshour, ProPublica, FiveThirtyEight, and The Atlantic.

“The fact that I’ve contributed to research that is being talked about, I think is the most exciting part,” says Gabrielle Levy ’22, student co-author with Nicolas Berlinski ’21 and Margaret Doyle ’22.

“Sending the Atlantic article to my friends and family to show them not only what I’ve been working on, but to also let them see the impact of the research, really drives home why we were doing all this, especially with the upcoming presidential election,” Levy says.

In addition to logging and coding the thousands of survey responses and creating data visualizations, Nyhan’s student researchers each worked on their own sections of the article, debating and rewriting their conclusions based on twice-weekly meetings with Nyhan, informal discussions among themselves, and, using Slack and email, with the scholars in New Jersey, Missouri, Utah, and England, Berlinski says.

“It was a great experience to have that kind of responsibility,” he says. “Professor Nyhan told us, ‘You all will have co-authorship if you fulfill the responsibilities of what it is to be a co-author.’ ”

Nyhan, who has published research with dozens of Dartmouth undergraduates through his seminar classes as well as through independent projects, says helping students submit articles for publication is central to his teaching.

“You need the right context for undergrads. They’re not going to step into something cold, but if you have a context that allows them to contribute, it can be quite powerful,” Nyhan says. “Maggie, Gabrielle, and Nick were full and equal participants and co-authors in this research process. Their ideas shaped the final product, and my colleagues and co-authors were super-impressed at how much they were able to contribute.” 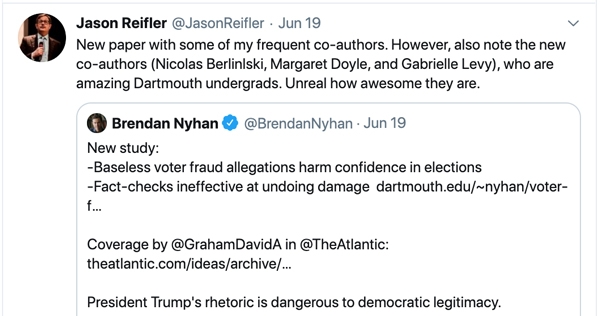 Margaret Doyle ’22 had not yet taken an “econometrics” class, a prerequisite to any advanced social science research, when she applied to work with Nyhan. But after a conversation, Nyhan invited Doyle to join the project. In the fall, she was taking econometrics and doing advanced research at the same time.

“It was kind of a gamble to pick someone with no government-research experience,” Doyle says. “I think there was a synergy there that was helpful in both the research and the class. I cared more about what we were learning in the econometrics class. I was more invested in really understanding it versus just testing well. I think that paid off. Now I’m actually an econometrics tutor.”

The research assistance of Berlinski, Doyle, and Levy was funded through the office of Undergraduate Advising and Research (UGAR).