Professors Offer Their Takes on Kamala Harris as VP Pick

The California senator made a campaign stop at Dartmouth last year. 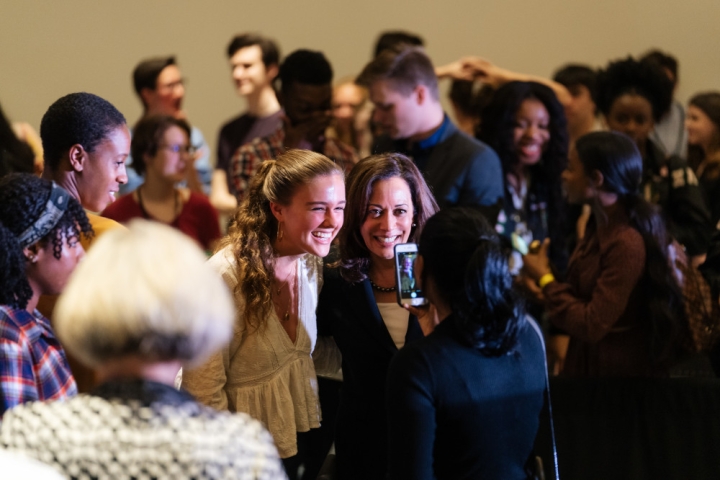 After Joe Biden on Tuesday named California Sen. Kamala Harris as his vice-presidential running mate, several Dartmouth professors spoke with Dartmouth News about the historical, social, and political significance of Harris as the first Black woman and the first person of Indian descent to join a major party’s presidential ticket. 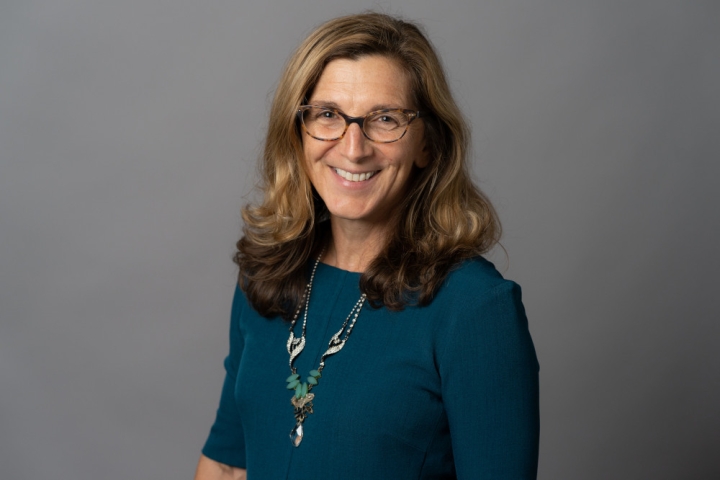 Lisa Baldez, a professor of government and of Latin American, Latino, and Caribbean studies, called the nomination of Harris a historic moment.

“It reflects a huge shift that has occurred in our country in the wake of the murders of George Floyd, Ahmaud Arbery, and Breonna Taylor, and the emergence of the Black Lives Matter movement. It is a testament to the experiences, power, and historical importance of Black women in the history of the Democratic Party, and the country more broadly,” Baldez says.

But while the emphasis on Harris’ identity as a Black woman rather than her qualities as a leader can generate excitement and motivate people to come out and vote, there is a downside, says Baldez, whose research examines the way formal institutional rules shape the possibilities for achieving gender equality.

“Focusing on Harris’ status as a ‘first’ perpetuates the idea that male candidates are the norm and obscures important shifts that have already occurred in what constitutes normal politics,” Baldez says.

“Kamala Harris is the first Black woman VP candidate—but she was one of six women running for president in the Democratic primary. She was one among a large field of impressively viable prospective candidates for VP. And she is one of a long line of Black women in positions of political power that includes Fannie Lou Hamer, Shirley Chisholm,  Barbara Jordan, Eleanor Holmes Norton, Maxine Waters, and Sheila Jackson Lee.” 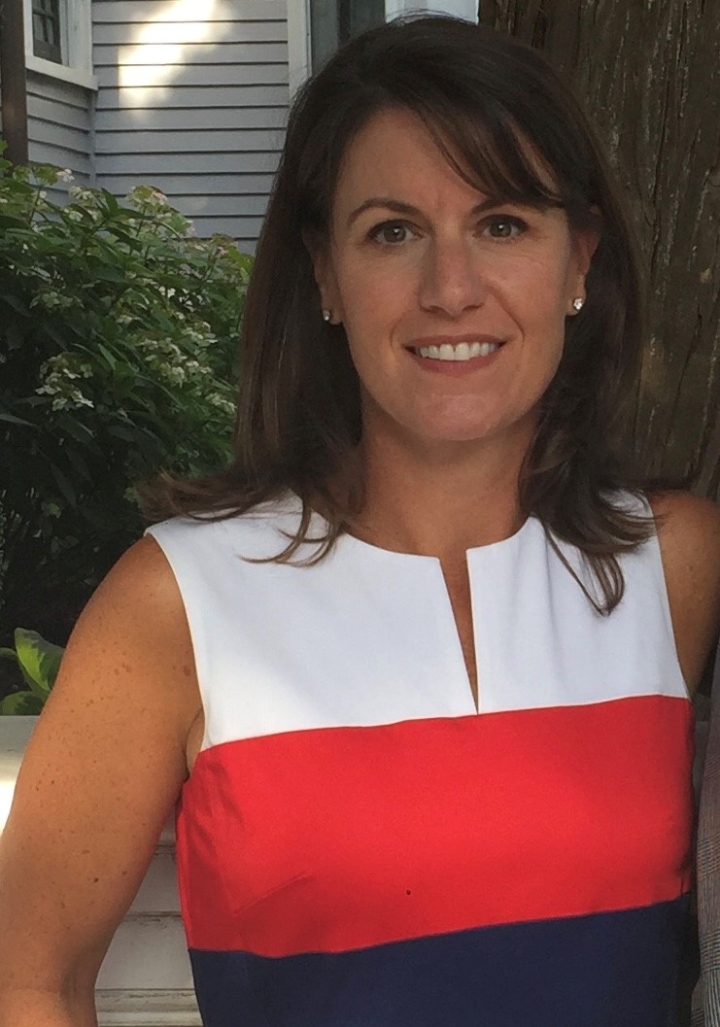 Associate Professor of History Leslie Butler also spoke about Fannie Lou Hamer, who in 1964 founded the Mississippi Freedom Party to challenge the local Democratic Party’s efforts to block Black voters’ access to the ballot box; and Shirley Chisholm, whose campaign for president in 1972 went all the way to the Democratic convention, where she marshaled a small block of pledged delegates and was mentioned as a possible vice-presidential pick for George McGovern.

Butler also discussed the broader political arc of the Democratic Party, from Andrew Jackson and Stephen Douglas, who wanted the vote for all white men, to the present, when the selection of Harris as vice president is seen by many as the most logical choice.

“It shows how the Democratic Party has evolved from, honestly, the party of white male supremacy, to a party where Black women are recognized as the most loyal base. It’s a huge evolution from the 19th to the 21st centuries,” says Butler, whose current book project is titled “Democracy and the ‘Woman Question’ in Nineteenth-Century America.”

But it wasn’t until after World War II that parts of the Democratic Party began to shift, as Minnesota Sen. Hubert Humphrey put it at the 1948 Democratic convention, from state’s rights to civil rights, Butler says. But the 1960s and ’70s brought the most profound political shifts.

“When we talk about people who laid the groundwork for Harris, we need to talk about Fannie Lou Hamer, and of course Shirley Chisholm, and others who paved the way. Harris doesn’t face the same sort of obstacles that they did, but there will be some very bad takes in the media, I’m fairly certain, and already from President Trump,” Butler says.

“But again, I do think the fact that this was not so surprising shows how far the Democratic Party has come,” she says. 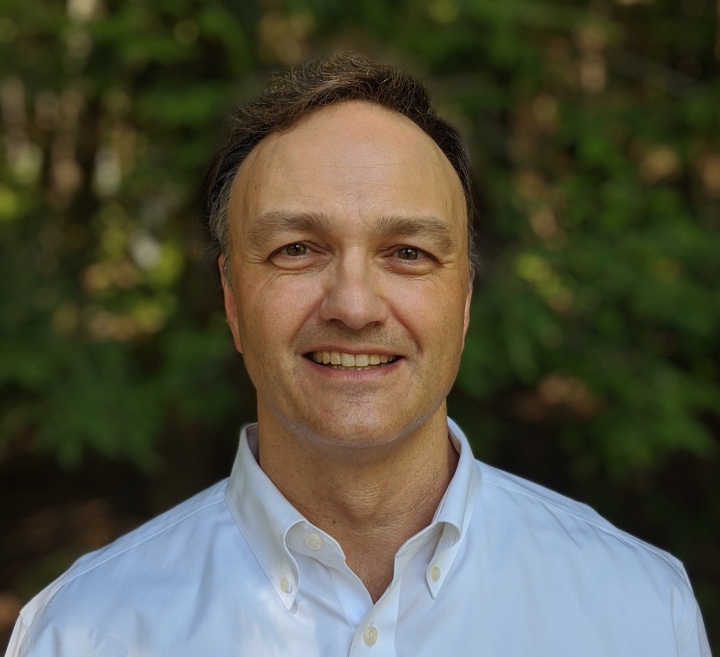 Professor of Government Dean Lacy says Harris will bring a lot to the campaign, not only because she appeals to important demographics, and not only because she helps with support from a certain region of the electoral map, but because she is an experienced and tested public servant and a tough political fighter—very valuable qualities, particularly in this election.

“You’re already seeing Republicans and some media outlets attack Kamala Harris on a number of fronts, but what surprises me is that none of these attacks are new. This tells us a lot about Harris as a pick, which is to say she’s been vetted, the criticisms are already out there, and she’s prepared to confront them,” says Lacy, whose work focuses on campaigns, elections, and American political behavior.

Harris, whose mother is from India and father is from Jamaica, is also popular overseas, says Lacy. “We have a vital ally in India and my understanding is that there is a lot of joy in India right now over Kamala Harris as a pick.” Lacy says.

“And another thing we know about her is she is a formidable and aggressive debater,” he says. “And I think it says a lot about Joe Biden that he was willing to select as a running mate somebody who attacked him ferociously in the campaign. He welcomes criticism and he likes a fight. This is now set up to be a very exciting election.”

Dartmouth was an early stop for Harris in her run for president. She spoke to a capacity crowd in Alumni Hall on April 23, 2019, taking some time before her appearance to greet a large overflow crowd outside of the Hopkins Center.

“I’m so happy to be at Dartmouth with you guys and I just want to thank you because the level of activism and leadership that is coming out of this campus really represents the best of who we are as a country,” Harris told the crowd of about 100 students and area residents on the plaza outside the Hanover Inn. 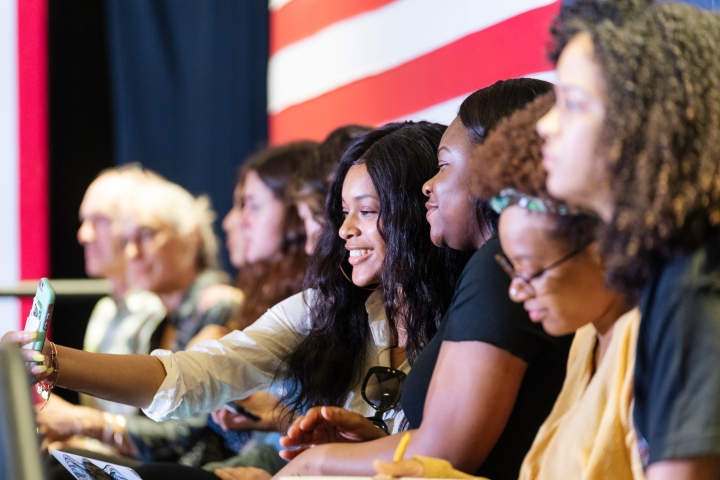 Kara Chamberlaine ’21 takes a selfie with her friend Esther Omene ’21, right, on stage in Alumni Hall on April 23, 2019, before a presidential campaign event with Sen. Kamala Harris. (Photo by Eli Burakian ’00)

Kara Chamberlaine ’21 arrived early for the event with friends Daniella Omeruo ’21, Marina Cepeda ’21, and Esther Omene ’21. They ended up sitting on the stage behind Harris and appeared in the background of some of the TV news coverage.

“I think it’s truly amazing to actually be here experiencing history,” Chamberlaine said at the time. “I remember in high school, looking at the presidential campaigns. I wished I was more involved. And now, actually sitting here to hear Kamala speak, is truly revolutionary.”