The four graduates talk about their projects, completed in the shadow of COVID-19. 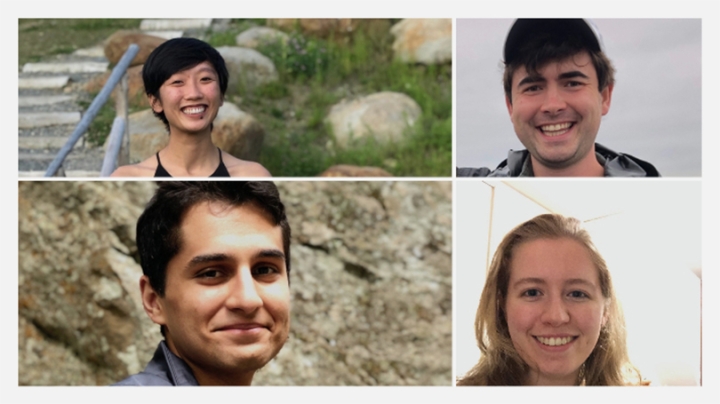 Dartmouth’s 2019-2020 senior fellows completed their projects in the shadow of COVID-19, overcoming obstacles and discovering additional relevance in the process. And each came away with gratitude for the program.

The Senior Fellowship program lets students stretch beyond the existing curriculum and immerse themselves in subjects of their choice to create an independent project in lieu of classes during their final undergraduate year. The program is funded by the Kaminsky Family Fund, established by Gerry Kaminsky ’61.

It’s not for everyone, says Margaret Funnell, director of Undergraduate Advising and Research.

Participants need to be self-disciplined, independent, organized, open to constructive criticism, and passionate about their projects. “It’s a long haul,” and some students are better off taking classes and completing an honors thesis, or pursuing their interests in graduate school, Funnell says.

The fellowship also requires mentors who are committed to the student and the project, and have time to dedicate to it, she says. But for the right person, it is a “phenomenal” opportunity.

To be granted time to think deeply about a problem and work closely with different professors is “such a special opportunity,” says Seamus Walsh ’20, a senior fellow who explored corporate board structures. “That kind of academic freedom to pursue questions you find interesting and engaging is common at Dartmouth, and this is just kind of that on steroids.”

’The Geography of Milk’

In her project, a blend of literary journalism and cartography, Janice Chen ’19 combined her fascination with maps—what they show and what they omit—and her affection for Vermont’s rural landscapes to explore how agricultural policy and food culture have, quite literally, shaped the Green Mountain State.

Her idea for “Organic Dairyland: Pastoral Dreams and the Geography of Milk” emerged from a previous fellowship, with Dartmouth’s Center for Social Impact, during which she explored issues related to dairy farming.

Her project focused on organic dairy farming in Vermont’s Missisquoi River Valley, in Orleans County. Among her challenges was figuring out how to use poetic prose to explain how the dairy industry works, says Chen, who majored in geography with a minor in English. She worked with advisers Luis Alvarez León, an assistant professor of geography, and Jeff Sharlet, the Frederick Sessions Beebe ’35 Professor in the Art of Creative Writing, and spent hours talking with Vermont farmers for the project, which is illustrated by maps she created. Partway through spring term those on-site visits changed to phone calls, due to COVID-19.

“We have this image of Vermont that is very green and pastoral, and it’s a very ideal landscape,” she says. “And we kind of have this illusion of it as being static, being like part of the past.”

Yet even though it appears static, the landscape has been “overwritten by all of these economic logics and individual economic choices made by farmers,” such as planting hay instead of corn.

That information comes into tension with the image of Vermont as a place people come to get away from the “dirty capitalism of cities,” says Chen, who is from Hong Kong. But it hasn’t lessened her love for the valley, which “bewitched” her.

“It’s just so gorgeous,” she says. “Learning about what has made it doesn’t make me like it less. I think it’s important to know where things come from.”

Jessica Kobsa ’20 studied the effectiveness of a strategy for reducing attention to peripheral food cues—advertisements that appear in places such as computer screens and billboards.

Children and adolescents are especially influenced by such images, which can prompt a person to eat despite not feeling hungry, a likely risk factor for overweight and obesity, says Kobsa. Her study, though small, identified some “significant effects,” she says, and yielded valuable information about the experiment’s design.

Her advisers were the leaders of Geisel’s Media and Health Behaviors Lab, Jennifer Emond, an assistant professor of biomedical data science, and Diane Gilbert-Diamond, an associate professor of epidemiology, medicine, and pediatrics. Kobsa first became involved with the lab, which uses psychological methods to answer health-related questions, as a junior, says Kobsa, who studied psychology and hopes to be a doctor. It was “really the ultimate combination for me.”

Though apprehensive about the fellowship at first, Kobsa says, “it wasn’t scary,” because her advisers were always happy to help.

For her study, she assigned 51 adolescents between the ages of 13 and 17 simple computer tasks designed to increase the amount of time they stayed focused and decrease attention to cues in their peripheral vision. They received face-to-face training, completed just before the pandemic caused lab closings, and were then asked to do several sessions at home. Ultimately, 94 percent of the participants completed six or seven of the seven total trainings.

Keeping the tasks simple and short probably contributed to that completion rate, says Kobsa, who is working as a clinical research assistant in a neurovascular lab at Yale University. “The high compliance rates are promising.”

Looking back, she encourages anyone who is interested to apply, even if they are intimidated.

“To have time and brain space to really focus on a big project” is rewarding, Kobsa says. “It’s worth it in the end.”

A biology and psychology major, Armin Tavakkoli ’20 was no stranger to research. But it wasn’t until his second year at Dartmouth that he had the chance to design and run his own experiments. For Tavakkoli, that changed everything.

“It’s no longer, ‘I’ve got wake up at seven and go to the lab,” says Tavakkoli, who worked as a research assistant for Travis Todd, a research professor of psychological and brain science. “It’s, ‘Oh yeah—I’m really excited about this result I’m about to get today. This is the question I wanted to answer.’”

The work he did with Todd—studying how previously extinguished fear becomes reactivated in the brain— informed his senior fellowship.

Because experiments are time consuming, he took the advice of his “two amazing advisers,” Todd and the late Professor David Bucci, and started his project several months early, Tavakkoli says.

Exploring which regions in the brain are active and necessary in the process of renewing previously extinguished fear, he focused on an area that had not yet been studied for that purpose, the retrosplenial cortex.

His discovery that this region, one of dozens activated during fear renewal, is necessary for the renewal to happen, is “the major finding of this whole experiment,” says Tavakkoli, who is lead author on a related paper recently published in Behavioral Neuroscience.

Tavakkoli completed three experiments and generated a database that will be made public and used by labs in the Department of Psychological and Brain Sciences. But due to the pandemic, he was unable to verify the results for one of the three experiments.

In “the grand scheme of things,” however, Tavakkoli counts himself lucky. “I’m healthy and alive.”

In addition to his Dartmouth advisers, Tavakkoli also found help well beyond Hanover, receiving “absolutely amazing support” from a National Institutes of Health researcher who kept asking, “’Do you have any questions this week?’” Tavakkoli says. Good research is driven by curiosity, “and when people are curious about the research, they respond.”

All of which resonates with Tavakkoli, who will attend Geisel School of Medicine this fall.

“When I’m curious about something,” he says, “you can’t stop me.”

Who’s on the Board? And Why It Matters

Seamus Walsh ’20 used econometrics—the application of statistical and mathematical models to economic data—and interviews to assess how corporate board structure affects the performance of publicly traded companies. While COVID-19 meant missing out on several face-to-face interviews, it also put a fine point on his findings.

“I think that what we’re going to see in this crisis is that better-run companies will survive and thrive, and poorly run companies will not,” says Walsh, who this fall will begin work as an analyst for a Boston-based private equity firm. Right now, he says, it’s probably more important than ever that boards are “small enough to be nimble and make decisions quickly.”

Walsh’s study stemmed from research done with Professor of Economics Andrew Levin, who also served as his mentor for the fellowship. Over the course of the year, he talked with CEOs, board members, and others from an array of industries.

Walsh, who hopes to write a book about his research, found no clear relationship between company performance and whether CEO and board chair roles are combined or separate, although non-chair CEOs are more likely to be fired for poor performance.

He also found that firms with more than 14 directors perform worse, likely because there are “too many cooks in the kitchen,” and everyone thinks someone else is doing the job, he says. In addition, a large board can reflect a CEO’s attempt at disempowerment. “To make the board less effective at monitoring you or getting in your way,” he says, “it would make sense to keep adding more directors.”

Walsh’s subjects said board diversity is currently “super important” to companies, who are seeking to recruit members from varying racial, gender, socioeconomic, and national backgrounds. While a large portion of revenue for most large publicly traded American companies comes from overseas, boards commonly include just one or two people from outside the U.S.

And with COVID-19 wreaking havoc on the economy, diversity is especially vital, he says. Companies that are making decisions quickly about layoffs, production, and other pressing issues need to consider everyone involved, Walsh says. And the best way to do that is “to make sure they’re represented in some way on your board.”

Due to the pandemic, the Senior Fellows were unable to discuss their projects at a symposium, as they normally would have. The short video presentations they created instead are posted on the UGAR website.