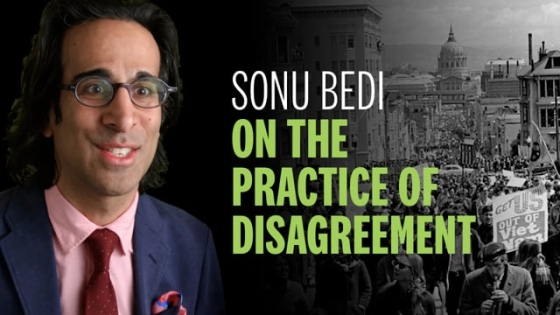 Cultivating a ‘Practice of Disagreement’

One of the centerpieces of new student orientation is the Shared Academic Experience—an opportunity for incoming students to engage in an intellectual pursuit together.

While this year’s shared experience will take place over Zoom instead of in a lecture hall, the discussion—led by Sonu Bedi, the Joel Parker 1811 Professor in Law and Political Science and the Hans ’80 and Kate Morris Director of the Ethics Institute—promises to give the Class of 2024 and transfer students a taste of the academic culture they’ll be joining as members of the Dartmouth community.

Bedi is asking the students to read chapters from his recent book, Private Racism, and respond to questions he’s posed on Canvas, Dartmouth’s learning management system. On Sept. 13, the students will tune in to Bedi’s live Zoom lecture, which he is organizing around their answers.

“I want to use this book to engage students in what I’m calling a ‘practice of disagreement’—and to model this as we discuss issues of racial justice,” Bedi says.

Private Racism looks at racial justice from the perspective of two prominent methods of approaching political theory. On the one hand, “there’s an ‘ideal society’ approach, which says we should treat race as morally irrelevant,” Bedi says. That is, in an ideal world, racial differences would have no impact on the application of justice.

On the other hand is what Bedi calls “ ‘an actual society approach,’ which looks at racial inequality and racial stereotyping in our actual society to see how we can address that.”

These two methodologies often generate vigorous disagreement among scholars, but part of Bedi’s thesis is to show the places where they agree. “I show that there’s an overlap—a moral consensus that private racism is wrong,” he says. “And so my argument is not beholden to one approach or the other, but arises from both approaches.”

Bedi hopes to challenge students to think about and apply both theoretical frameworks to a hypothetical problem, such as how to create a racially just process for casting a Hollywood movie.

“The idea is that they can practice the kind of disagreement that scholars engage in when they’re discussing these issues,” he says.

The book itself benefited from a practice of disagreement Bedi encouraged in his own classroom. Three years ago, in his “Race, Law, and Identity” seminar, he says, “I had students read earlier versions of the chapters and told them they could discuss them in their final papers—but they had to be critical of what I was saying. I got some great papers.”

That student feedback helped inform Bedi’s revisions. “And now first-year students are going to be reading the final product that in part is based on what their fellow students had a hand in,” Bedi says. “I want them to see that what they’re reading and what they’re engaging with is a product of Dartmouth—of the academic experience that we have in the classroom.”

Bedi says this kind of intellectual practice is the same for faculty as it is students, regardless of academic discipline.

“I want the ’24s to see that faculty are students of their discipline,” he says. “I consider myself a student of the law, a student of the Constitution. I may have more information or knowledge that I can impart to students, but we’re all students. We’re all engaging in learning in the classroom.”