The beloved faculty member taught students to write about the natural world. 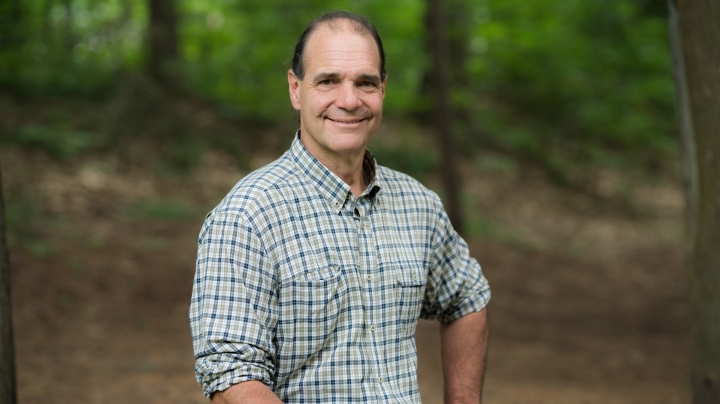 Senior Lecturer Terry Osborne will be remembered for many things, including his place-based writing that showed how the environment shapes human identities. (Photo by Eli Burakian ’00)
9/23/2020
Body

Terry Osborne, a senior lecturer in the Environmental Studies Program and the Institute for Writing and Rhetoric and beloved member of the Dartmouth and Upper Valley community for more than three decades, died Sept. 7 at the age of 60 after a year-long struggle with cancer.

“Our thoughts are with Terry’s family, friends, and colleagues at this very sad time. He will be greatly missed,” President Philip J. Hanlon ’77 wrote in a message to the community last week.

The author of the 2001 memoir Sightlines, The View of a Valley Through the Voice of Depression, which explored the landscape of the Upper Valley in the context of his struggle with chronic depression, Osborne was known for place-based writing that showed how the environment shapes human identities. He was an early member of the Environmental Studies Program who, along with the late Noel “Ned” Perrin and Donella Meadows, brought a humanist perspective to courses on nature writing, ecopsychology, and community-building.

“Terry’s loss is felt acutely by his colleagues,” said Doug Bolger, the program’s current chair. “We will remember him for his integrity, his big smile and huge heart, his generous spirit, and his extraordinary dedication to his students. Through his writing, teaching, and the way he lived his life he showed us the power of the arts and humanities to illuminate how identity and psychology shape our relationship to the Earth and give meaning to our work.”

Ross Virginia, the Myers Family Professor of Environmental Science and director of the Institute of Arctic Studies, said he considered Osborne a mentor when he arrived at Dartmouth in 1992 to chair Environmental Studies. “I didn’t have a liberal education as an undergrad—I was a science and engineering type—so I was very excited about the chance to connect my science and research to people in a direct, meaningful way,” Virginia said. “Ned and Terry were my guides into the humanities and to thinking about disciplines outside of the sciences and how they’re part of a good life.”

Andrew Friedland, the Richard and Jane Pearl Professor in Environmental Studies, co-taught a course on “Humans and Nature in America” with Osborne—a course they both also co-taught with Perrin. “I saw the incredible devotion Terry had to teaching and to his students, and he inspired me to be a better teacher,” Friedland said. “He taught me that you can sometimes put ‘the rules’ aside to meet the needs of a student when compassion and flexibility are the best things to do.”

Osborne edited and wrote the introduction to Perrin’s 2006 book, Best Person Rural. After Perrin’s death, Osborne owned and lived in Perrin’s farmhouse, and often took his classes on field trips up Bill Hill. As Perrin wrote in First Person Rural: Essays of a Sometime Farmer, “Bill Hill is a large lump of glacial debris behind the pasture across the road. I own it. Insofar as a thing as small as a human being can claim to own a thing as big as a hill.”

For the last decade, Terry lived with his wife, Mary Kay “MK” Beach ’76, on 102 acres in Etna, N.H. “Terry loved that special land as well, delighting in the landscape and in the wide variety of species found there. He also enjoyed bringing students there, sharing the sacred space,” she said.

Osborne’s devotion to his students led him to receive the Dean of the Faculty Teaching Award in 2017. His commitment extended beyond the classroom to, among other things, the Dartmouth Organic Farm, the Wednesday morning mindfulness group he co-founded, the student mindfulness group for which he was a faculty adviser, and the undergraduate society Amarna, for which he was also an adviser. “Terry means a lot to everyone who is part of Amarna, and his legacy is a powerful one,” said Lucas James ’21, the society’s librarian and treasurer.

Osborne was committed to connecting his teaching with authentic experiences of the environment and the local community beyond Dartmouth. With the Dartmouth Center for Social Impact, he developed a course, “COVER Stories,” that engaged students with the Upper Valley nonprofit COVER Home Repair, and helped design the framework for a college-wide initiative to help faculty integrate Social Impact Practicum (SIP) projects into their courses.

“Terry was one of the first people I met when I came to Dartmouth, but our working relationship deepened even further when we began collaborating together on SIP projects,” said Ashley Doolittle, associate director of the Center for Social Impact. “Terry had been leading the charge on community-engaged social impact work for over a decade already, and his counsel was formative in developing the SIP model to be truly responsive to community needs while advancing student learning.”

Jay Mead ’82, a job crew leader at COVER, worked with Terry and his students on his COVER Stories class for four years. “Terry was a social weaver who magically wove together the lives of our low-income homeowners, the COVER staff, and his Dartmouth students,” said Mead. “He was a powerful, peaceful, wise man. The world needs people like Terry. I will miss him on so many levels.”

Flora Krivak-Tetley ’02, Guarini ’19, a postdoctoral fellow in the Ecology, Evolution, Environment, and Society Program, recalled arriving at Dartmouth as an undergraduate still grieving her mother’s death. “Terry was responsible for me making it through Dartmouth,” Krivak-Tetley said. “His exquisite teaching of Terry Tempest Williams’ Refuge, combined with his willingness to be vulnerable and open about his own struggles, gave me an environment where exploring my own grief was welcomed. Of course, I also learned about writing in Terry’s courses, though I was never a stellar writer. I did, however, desperately need writing as an outlet and Terry welcomed that. He was one of those rare people who accepted and taught to the entire human who showed up in front of him, not just to the part of that human that was a receptacle for facts and knowledge.”

Environmental studies majors Ella Hall ’20, Skylar Lewis ’20, and Lucas Rathgeb ’22 took Osborne’s “Nature Writers” class in the fall of 2019. “We shared our writing, which was sometimes difficult, as it was often personal, but this made us closer as a group and Terry was the one guiding us,” Hall said. “He was incredibly welcoming, free of judgement, and willing to listen and share with us. He made me feel seen and supported and I view my time in his class and with that group of classmates as different than any other term or class experience at Dartmouth.”

Lewis said Osborne modeled the values he taught. “Terry began the course by setting the expectation that we share ourselves authentically throughout the class, and that we establish a space for the group that would encourage authenticity and self-exploration. Terry indeed taught us to become better writers, but he also taught us how to experience nature more intentionally. As someone who grew up spending most of my time outside of class in nature, I didn’t think I needed coaching in this part of life, but I was wrong. His mentorship not only shaped how I write but also how I walk through the world, for which I will always be grateful.”

Rathgeb called the class “by far the most challenging class I have had at Dartmouth, as both a writer and a human being, but through it all Terry helped me truly find my voice. On the final day, after I had shared possibly the best and most vulnerable piece I have ever written with a group of relative strangers, Terry came over to me and gave me the biggest bear hug I have ever received. It was, I think, the proudest moment of my life, to be validated as a person and a writer in such a way, and to feel so close to such a kind and admirable man.”

During that term, Osborne was diagnosed with cancer. “He told us about it with great transparency,” Hall said, and the terrible prognosis did not shift his focus away from the students he cared about so much. “When I was applying for a job, Terry was gracious enough to write a letter of recommendation for me in spite of his declining health,” Hall said. “His mantra throughout the class was ‘dig deeper,’ and he was always pushing us to ask ‘why?’ and to uncover the next layer of depth in our writing. I really appreciated Terry’s support, mentorship, and guidance during this time.” 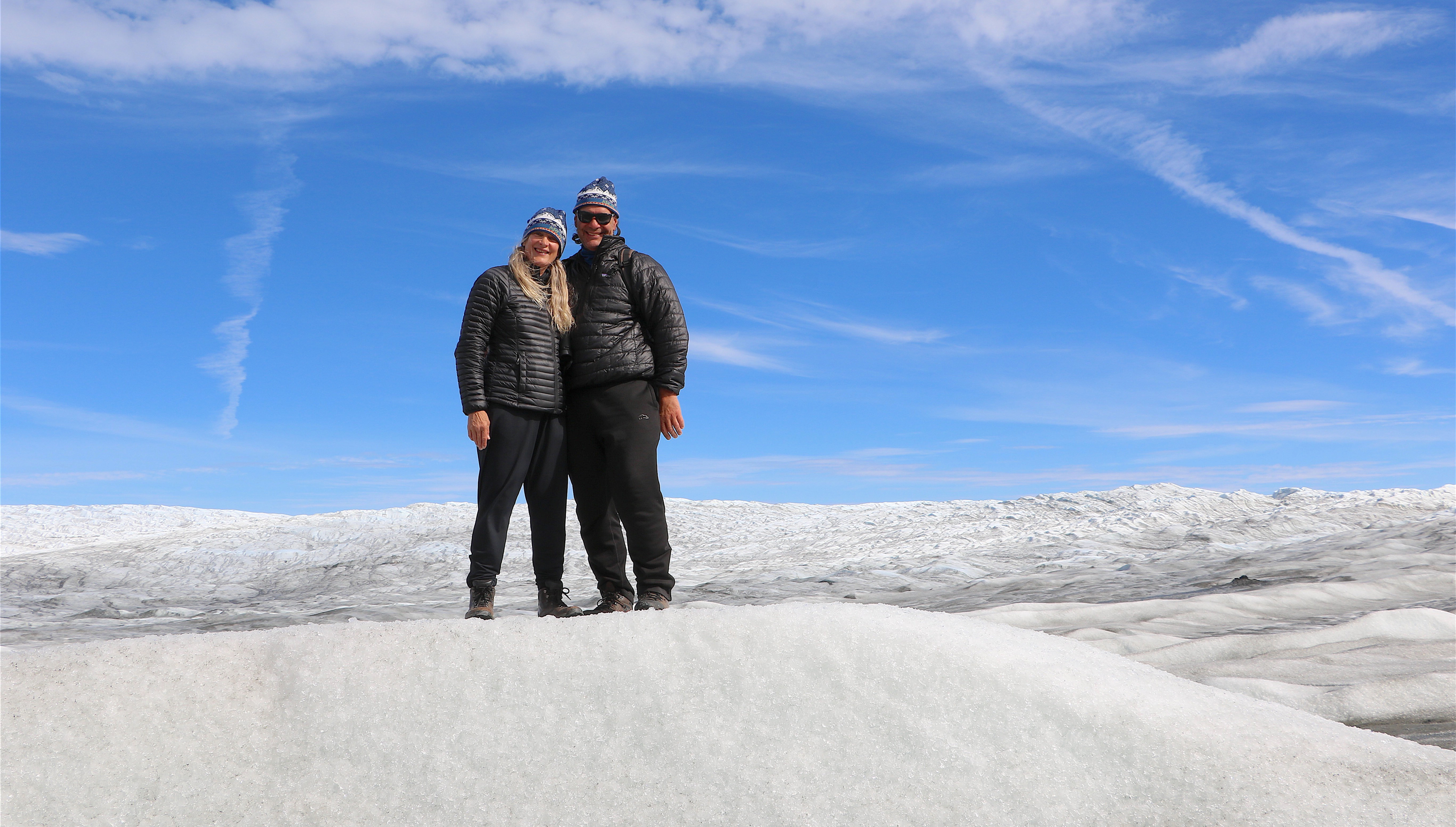 In 2018, Osborne and Beach accompanied Ross Virginia on a Dartmouth alumni trip from Baffin Island to Greenland. One early morning, on board a converted Russian research vessel in the middle of the Davis Strait, Virginia looked outside to see Osborne and Beach leading a group of alumni in an informal tai chi class on the foredeck. Devoted students of tai chi for more than a decade, Osborne and Beach were out on the deck at 7 a.m. every day of the expedition.

One particular day, said Virginia, “The ship was rocking in the fog, in the wind—there was this mist, everything’s swirling around—and they’re doing tai chi. If I had to pick one image, that’s it: Terry and MK out there balancing on the rolling ship and just being so happy.”

Remembrances and photos of Terry Osborne can be shared at www.fromtheheart.land.