A group writing assignment creates community, one serial installment at a time. 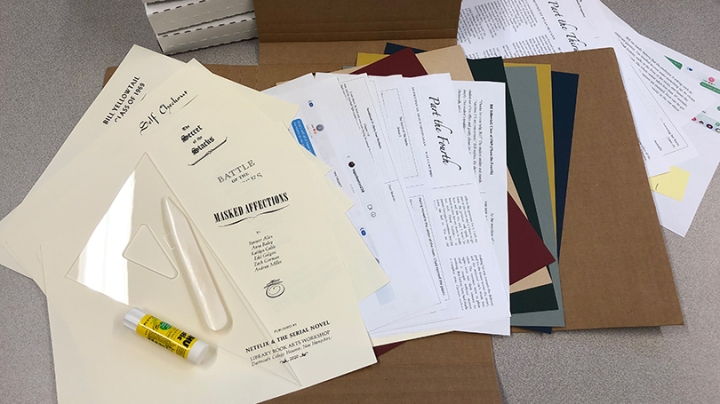 During the pandemic, Dartmouth faculty and staff have been using innovative strategies, such as providing lab kits, to create effective, engaging online courses. To share your experience using hands-on materials in remote or hybrid classes, email aimee.minbiole@dartmouth.edu with the subject line: lab kits.

Like 19th-century readers awaiting an installment of their favorite serial novel, or TV fans marking time until the next episode of a beloved show, this summer, students in Lecturer Christie Harner’s “Netflix and the Victorian Serial Novel” found themselves eyeing the mail each week for a certain manila envelope.

The packages, shipped by Sarah Smith, director of Dartmouth’s Book Arts Workshop, contained the latest installments of serialized novellas the class was writing.

The assignment aimed to involve students in activities they normally could have done on campus, such as Book Arts, and give them a chance to communicate and work together, said Harner, a lecturer in the Department of English and Creative Writing. “I was trying to think of ways to create community during the pandemic.”

Their process echoed that of writers and publishers in the Victorian Era, when novels were often published in parts and later bound into books.

Students worked in small groups to write the four-part novellas and received copies of each group’s installments as they were completed. The final sections arrived with lab kits containing letter-pressed title pages, cover paper, and book-binding materials—a bone folder for creating deep creases, a triangle, and a glue stick.

Ryan McCann ’22 says he was initially apprehensive about working with a group on a creative writing project.

But the challenge of maintaining the writers’ artistic freedom while also ensuring that the story flowed well, even though someone new was writing each issue, paid off, the neuroscience major said. “It brought our group together, and I met a number of people who I don’t think I would have had the chance to meet in other contexts.”

Several students expressed how excited they were to share the installments with their family members and roommates, said Harner, who plans to continue using the assignment after returning to the classroom. “So, it became a community even outside of the class.”

Three of the novellas are set during the COVID-19 pandemic—including one that takes place on the College campus—and two delve into Dartmouth history and lore. A few of the books may become part of Rauner Special Collections Library’s archive of COVID-19-related materials.