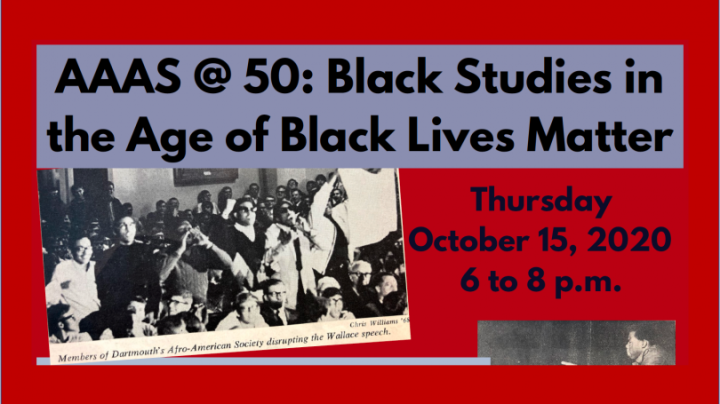 Dartmouth will mark a half-century of teaching and scholarship on Black studies with a forum that brings together student activists from the late 1960s.

“Black Studies in the Age of Black Lives Matter” will take place online from 6 to 8 p.m. on Thursday, Oct. 15. The event will celebrate the history of the African and African American Studies Program as one of the country’s oldest academic centers dedicated to research and teaching about people of African descent from around the world.

“The program is among the oldest of its kind in the nation,” says Ayo Coly, professor of comparative literature and African and African American Studies and chair of the African and African American Studies Program. “As we celebrate the 50th anniversary of Black studies at Dartmouth and nationally, the resonances between the moment of the ’60s civil rights movement and the unfolding moment of Black Lives Matter highlight the continuing urgency of Black studies.”

The commemoration comes during the 51st year of the program’s founding. An event scheduled for earlier this year was postponed.

The online roundtable will commemorate the history of Black studies at Dartmouth; celebrate the activism and work of students and scholars; consider the current meaning and relevance of Black studies; and consider how present demands regarding Black studies echo the demands made in the ’60s.

“Our program, like many across the nation, owes its existence to the relentless marches and protests of the civil rights movement,” Coly says. “I am excited and humbled to welcome back to the College former students who spearheaded the formation of Black studies and African American studies at Dartmouth.”

Coming only a few months after the death of Rep. John Lewis, the event will also serve as a tribute to the late congressman and civil rights activist.