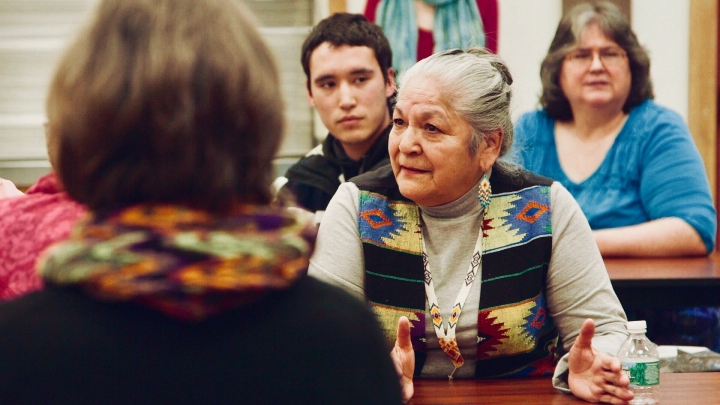 In this scene from Dawnland, Georgina Sappier-Richardson shares her story at a Truth and Reconciliation Commission community visit. At 2 years old, Sappier-Richardson was removed from her home and Passamaquoddy community by Maine’s child protection services. (Image courtesy of Upstander Project)
10/30/2020
Body

An Emmy-winning documentary about Indigenous children torn from their families under Maine’s child-welfare system will air on PBS’ World Channel next month, starting at 7 p.m. on Nov. 3. The hour-long broadcasts come as the country braces for a contentious election, and a challenge to legislation designed to protect Native children makes its way through federal courts.

Dawnland, co-produced by Samson Occom Professor of Native American Studies N. Bruce Duthu ’80, documents the work of a historic investigation, the first government-sanctioned truth and reconciliation commission in the United States, as it investigates the effect of the separations on Native communities and sets a course for state and tribal relations going forward.

The film—which includes testimony from Wabanaki adults forcibly removed from their homes as children—is somber, yet hopeful, says Duthu.

“You hear people talking about what a relief it is to have the opportunity to share their stories, which many of them say they suppressed virtually all of their lives,” he says. “There’s great potential for healing divisions when we create space and are intentional about the opportunity for people to tell their truths. ”

’A Story Most Americans Don’t Know’

“It’s a story most Americans don’t know,” one that dates back to the 18th century, when the Colonial government placed bounties on the heads of Native men, women, and children, he says. Later, the government would pass federal laws making it illegal for Native people to practice their cultures, including speaking their own languages.

The film picks up that thread in the 1870s, when Indian children were taken from their homes, without their parents’ consent, and placed in boarding schools, often hundreds or thousands of miles away, Duthu says, a practice that continued into the 1950s and ’60s, when it took on a different form.

Under the 1958 federal Indian Adoption Project, Native children were taken from their families by state social workers and placed in white homes, he notes. At the same time, federal policy encouraged Native people to move from their ancestral homelands to urban areas, to accelerate the assimilation process.

In 1978, Congress passed the Indian Child Welfare Act, which gave tribal courts the power to decide whether a Native child needed a new home. But many states are in violation of the Act, which currently faces the latest of a series of challenges.

“There are still elements in the U.S. society that are trying to resist the shift of power to the tribes to be involved in protecting their children,” Duthu says. “So, we’re certainly not done with this important work.”

Since its release in 2018, Dawnland has drawn attention to the subject from across the U.S. and beyond.

Trying to assimilate children as a strategy to eradicate Indigenous peoples is “part of the playbook of a colonizing nation,” says Duthu, who recently presented a screening and Q&A for lawyers through the Vermont Attorney General’s office, and is working with colleagues in New Zealand and Australia to organize similar events focused on Indigenous child welfare issues.

The TRC—the first such government-sanctioned commission in U.S. history—has been sought out for advice by groups in states considering similar investigations, he says. And Duthu is watching the progress of a Congressional bill introduced this month calling for a national truth and healing commission on Indian boarding schools and the adoption system.

The outcome of the election could influence whether the legislation gains traction, but Duthu is optimistic about the legislation’s chances in the new Congress and about the bill itself. It could provide an opportunity for that story to be told, and for Native children to not be divorced from their culture, but to be better able to enjoy it, “to be fully ensconced in the culture in which they were born.”

The broadcasts are being presented by World Channel and the nonprofit Upstander Project, which creates “compelling film and educational resources … to dismantle hurtful and stereotypical racist ideas,” the project says in a news release.

For more information about these and other upcoming broadcasts of Dawnland, go to the Uplander Project website.