Theater Mainstage Adapts to the Radio 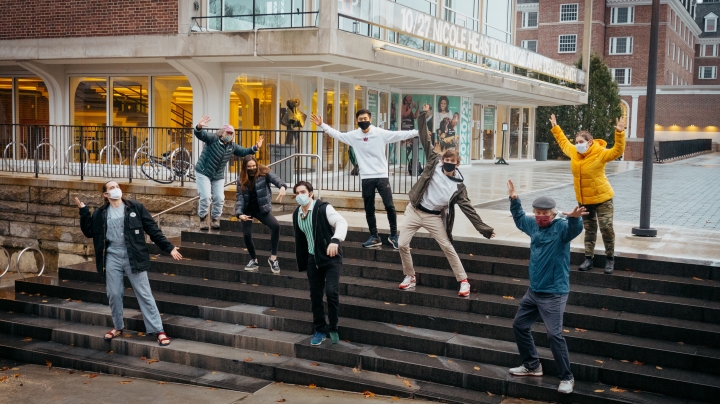 On a recent evening, cast and crew of this fall’s theater mainstage production log on to Zoom from wherever they are—Hanover, White River Junction, California, Washington state—to rehearse a scene of Odon von Horvath’s 1932 stage play Faith, Hope, and Charity, adapted for radio and directed by Professor of Theater Peter Hackett ’75.

The production airs on Dartmouth’s radio station on three successive nights, Oct. 31, Nov. 1, and Nov. 2, at 7:30 p.m. Recordings will be also available on the websites of the theater department and the Hopkins Center for the Arts along with historical reference material and interviews with cast and crew.

An Adaption for the Times

Von Horvath set his play in Vienna, but Hackett, the Avalon Foundation Chair of the Humanities, has adapted it to the American historical context of Great Depression-era Washington, D.C., during the so-called Bonus Army marches—“one of the first really spontaneous protest movements that ended in a march on Washington,” Hackett says.

“The original play was one I’ve always sort of had in my back pocket,” Hackett says. Thanks to a grant from the Leslie Center for the Humanities, he collaborated with Hungarian writer Peter Fabri on a literal translation from the German this past summer, from which he developed the current version.

The Bonus Army was made up of World War I veterans seeking payment of bonuses the federal government had promised for their service. Over the summer of 1932—an election year—thousands of veterans and their families from around the country camped out around the capital in largely peaceful demonstrations.

Ultimately President Herbert Hoover ordered then-Army Chief of Staff Gen. Douglas MacArthur to clear the camps in a move Hackett describes as “strikingly similar to the recent Black Lives Matter protests in Washington, where Trump sent the military on peaceful protestors so he could go across the street to the church for a photo-op.”

Performing Over the Airwaves

Hackett’s adaptation follows Elisabeth, the daughter of one of the veterans, as she tries to find her way in a world with the decks stacked against her.

“She doesn’t have money or connections, but she has an overwhelming sense of hope and excitement for the future that she creates for herself,” says Reagen Readinger ’23, who plays Elisabeth. “She uses this optimism to get people to back her.”

Readinger is an economics major modified with psychology and a theater minor from London. Though she acted with a youth theater company in London before coming to Dartmouth, this is her first experience of the theater department—and her first radio play.

“You have to think differently because the audience can’t see your facial expressions,” Readinger says. “I’ve also learned that you can’t rely on the voice alone. You have to act with your whole body, otherwise it’s not going to come across over the radio. So you do still have to put everything into it.”

Performing for radio has required the students to hone technical and artistic skills different from those they might use on stage. Each cast member has been equipped with a professional microphone for the show, thanks to an experiential learning grant from the Dartmouth Center for the Advancement of Learning.

“It’s a challenging project, but the students are really stepping up,” says Hackett of how the cast and crew are embracing the medium radio theater in the COVID-19 era. “We’re approaching this exactly the way a professional company would produce a radio play. The only disadvantage we have is we’re not in the same room together.”

“I miss the in-person bonding, and it’s not the same over Zoom, but I think everyone is making an effort to reach out, and we’re doing group chat where we’re sending things back and forth,” Readinger says.

“We’re working from a script that was originally meant for stage, so I’ve been keeping track of changes that we need in order for it to make sense for radio,” she say. “As the actors are reading, we’ll have to pause and ask, does that make sense? Can the audience track that without a visual aid? Or maybe there’s period slang that doesn’t make sense in a contemporary format.”

Warden says she wanted to be involved in the show because she hopes to produce a radio play—an adaptation of Eisa Davis’ Bulrusher—for her senior thesis.

“I’ve found it really interesting to be doing a radio play set during a time when radio plays were probably at their height,” Warden says. “We’re listening to this story in the same way that these characters probably would have listened to a story. That’s exciting to think about.”

At rehearsal, sound engineer Jane Shaw links the cast members’ audio into Cleanfeed, an app that lets her control everyone’s sound individually. The students record their own parts, which they share with Shaw for the final edit.

As the actors run through a scene, Shaw hears some distortion coming from the nearly empty dorm room where Joana Lame ’23, who plays Maria, has set up her laptop and mic.

“Do you have a blanket you could hang?” Shaw asks. Lame finds one and drapes it over her head and screen like a tent. Several of the students already have pillows or blankets around them to absorb sound—giving the Zoom meeting something of the look of a children’s slumber party, pillow forts and all.

Some of the actors play several parts. Shaw coaches Jeffrey Lam ’24 on creating a nasal voice for one of his characters to help the audience differentiate who’s speaking.

Later, during a scene when several characters react to the presence of a police officer, played by Thomas Latta ’18, Hackett and the cast work out that Latta can walk past his microphone, whistling, so audiences can tell that he’s approaching.

Hackett sees an upside to immersing students in the radio medium, which he says is “making a comeback” as audiobooks and podcasts gain popularity. “There are people who make a career of this kind of work. It’s a different kind of acting, but it’s a worthwhile skill and a very interesting art form.”