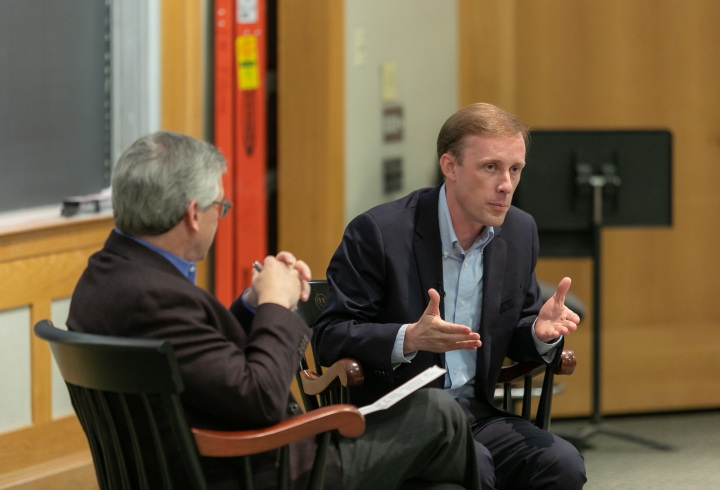 President-elect Joe Biden has named as national security adviser Jake Sullivan, who held a teaching residency at Dartmouth from 2019 to 2020.

Sullivan spent four terms teaching at the John Sloan Dickey Center for International Understanding and in the Department of Government, starting in January 2019—first as a Montgomery Fellow through the winter term and then as a Magro Family Distinguished Visitor in International Affairs for three subsequent terms.

Daniel Benjamin, former director of the Dickey Center and now president of the American Academy in Berlin, worked with Sullivan in the Obama administration and recruited him to teach at Dartmouth. Sullivan, with his experience as a top adviser to Secretary of State Hillary Clinton and then-Vice President Biden, brought a wealth of real-world policy experience and a deep commitment to sharing that knowledge with students when he came to Dartmouth, Benjamin says.

Juliann Li ’21, who took “The Future of the International Order,” taught by Sullivan and Benjamin in the spring semester, recalls Sullivan as an outstanding teacher.

“He was a great teacher—really candid in the way he spoke about policy issues,” says Li, who took the class remotely from home in San Diego during the spring term. “And sometimes he would have individual chats with us to give us career advice or advise us on how to enter this foreign policy sphere.”

Despite COVID-19 restrictions during the term, Sullivan was always willing to talk with students in small groups or individually over Zoom or on the phone to answer questions or to go into more detail about topics discussed in class, Li says. “In addition to all that, he is a very genuine, candid person.”

Matt Magann ’21, who was also a student in Sullivan’s spring class, says they examined topics such as how the rise of China, the interventions of Russia, the global pandemic, and U.S. engagement in the world could affect the global landscape.

“It was a great opportunity to be able to sit in a class with 12 or 13 people with somebody who’s now national security adviser, one of the highest-ranking foreign policy positions out there,” Magann says.

“The fact that we can have people like that, and that they can work directly with undergrads, is something that’s really special about Dartmouth.”