Students from the Class of ’21 join in the centuries-old ritual in a very modern way. 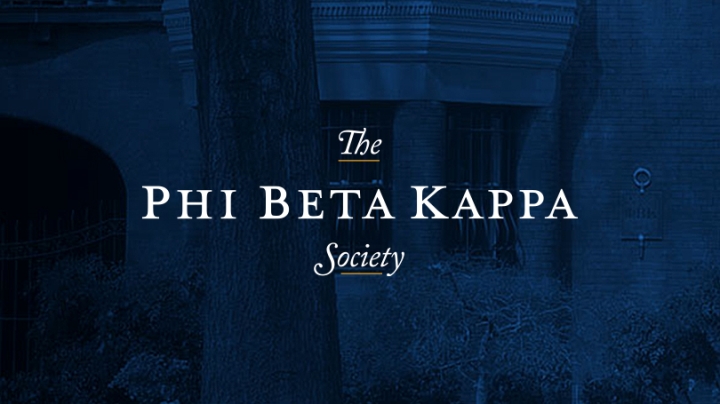 The Alpha of New Hampshire Chapter of Phi Beta Kappa at Dartmouth inducted 22 new undergraduate members in a ceremony Tuesday, Nov. 17, that was largely unchanged from the society’s first gathering more than two centuries ago, except for one detail: It was conducted entirely over Zoom.

Phi Beta Kappa Chapter President Dennis Washburn, associate dean of the faculty for interdisciplinary programs and the Burlington Northern Foundation Professor in Asian Studies in Honor of Richard M. Bressler ’52, acknowledged the unusual circumstances as he opened the meeting.

He then asked if there were any votes of nay to a motion for waiving a reading of the 2019 minutes, and said, “hearing no objection, which would be difficult as you are all muted, we will dispense with the reading of the minutes.”

That accomplished, Washburn proceeded with the ritual.

“I now ask you, in words first employed in 1779, and therefore venerable in the usages of our society, to affirm that you will, with all your possible efforts, endeavor to prove true, just, and deeply attached to this, our growing society,” Washburn recited. “And in addition to this ancient pledge, do you affirm that in all your relations you will adhere to the principles of the philosophy which its founders accepted as the inspiration of life, namely, fraternity, morality, and literature?”

The students signified their acceptance of the honor through an online chat room, typing their names, majors, locations, and the words “I do” as the screen showed a compilation video honoring them.

Also conducting the ceremony were Chapter Vice President Susannah Heschel, the Eli M. Black Distinguished Professor of Jewish Studies, who noted that the society was founded in 1776 by a group of students at the College of William and Mary in Virginia. The students “believed that a new nation required new institutions—cultural as well as political—and they were committed to intellectual fellowship shaped by the values of personal freedom, scientific inquiry, liberty of conscience, and creative endeavor,” she said.

Chapter Secretary Kate Soule, director of arts and sciences finance and research administration, encouraged the new members to get involved in local Phi Beta Kappa organizations wherever they choose to live after graduation.

“If there is not an association in your area, you can stay connected on social media,” Soule said, before sharing a YouTube how-to video from the national Phi Beta Kappa headquarters demonstrating the society’s secret handshake.

Following the video, Soule added, “I admit, I learned it slightly differently, with the other fingers curled under during the grasp. But in an organization over 200 years old, there are bound to be local variations.”

The following students from the Class of 2021 were inducted:

“This College is and should be dedicated first and foremost to the life of the mind,” Washburn said, congratulating the new members. “Phi Beta Kappa is a most tangible recognition that all of you join us in this commitment.”

Thalia Wheatley, the Lincoln Filene Professor of Psychological and Brain Sciences, was elected as an honorary member of Phi Beta Kappa, and William Phillips ’71, a screenwriter, director, and visiting associate professor, was elected an alumni member of the society. Steven Doig ’70, who teaches journalism at the Walter Cronkite School of Journalism and Mass Communication at Arizona State University, spoke as an alumni member of the society, having been elected at the 2019 meeting.

Sophomores were also recognized for their accomplishments, with the prize offered annually to students with the highest academic ranking after completing five terms at Dartmouth, no later than two years after matriculation.