Professor’s Roving Office Hours Are a Hit With Students

Weekly walks around Occom Pond offer an opportunity to connect in person, safely. 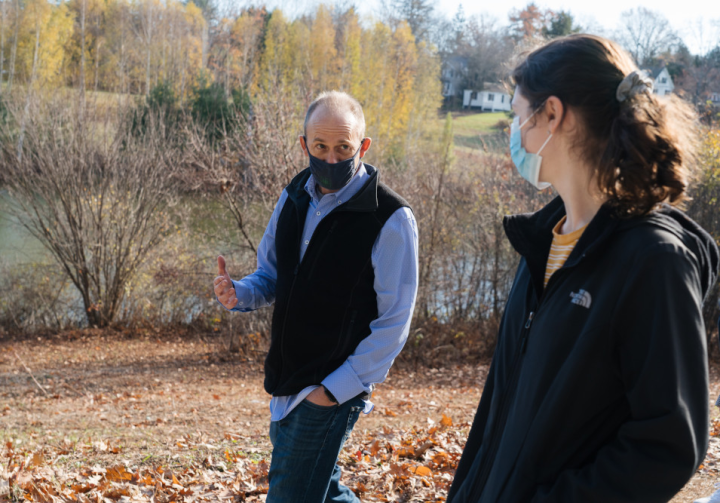 Bill Hudenko, a research assistant professor of psychological and brain sciences, talks with Ariela Feinblum ’23 during a weekly walk with students around Occom Pond. (Photo by Eli Burakian ’00)
11/16/2020
Body

Just before one o’clock on Thursday afternoons, MK Song ’21 grabs his mask and heads over to Moore Hall. There he meets up with Bill Hudenko, a research assistant professor of psychological and brain sciences, and a handful of other students in Hudenko’s abnormal psychology class. For the next hour, they stroll, physically distanced, around nearby Occom Pond, chatting about class, or whatever else comes to mind. At a time when face-to-face gatherings are less common and require special precautions, Hudenko’s version of office hours is appreciated, say the students.

“It’s been very meaningful to interact with the professor during a time like this,” says Song, a psychology major. “It really is amazing that Professor Hudenko is going out of his way to meet with his students in person.”

“Online technology such as messaging can help reduce feelings of isolation that may arise during the pandemic,” says Hudenko. Nonetheless, he says, “it’s very difficult to substitute the real feeling of care and concern that we have for students over Zoom.”

In addition to offering virtual office hours this term, Hudenko says he created “Occom Hours” to let students know that he is on campus, thinking about them, and that he wants them to be mentally healthy. It’s an “extra layer that is beyond just saying, ‘You can email me,’ or ‘I’m available on chat.’”

With no particular agenda, the weekly conversations cover anything from students’ professional interests “to just, ‘How is life during lockdown?’” Hudenko says.

They offer an opportunity for him to check in with his students and see how they are doing, and for the students to have some in-person time, “and time is really the greatest gift that we can give others,” he says. The regular turnout—about five students each week—“perhaps speaks to the need and the desire for that kind of connection.”

Even before the pandemic, some Dartmouth professors had been known to hold their office hours on foot. Now, students find themselves appreciating aspects of those in-person interactions that might have previously gone unnoticed.

Song says he enjoys being able to talk about anything “related to the topic of abnormal psychology,” and to hear about his professor and fellow students’ interests—offline.

“It feels nice that we don’t have to unmute our mic and wait for someone to finish,” he says. “We can even make side conversations with someone other than the professor, if he’s talking to someone specifically.”

And the students aren’t the only ones who get a boost.

“It’s probably been the brightest part of teaching for me this term,” Hudenko says.