Students, faculty, and staff rose to the challenge of an unprecedented year. 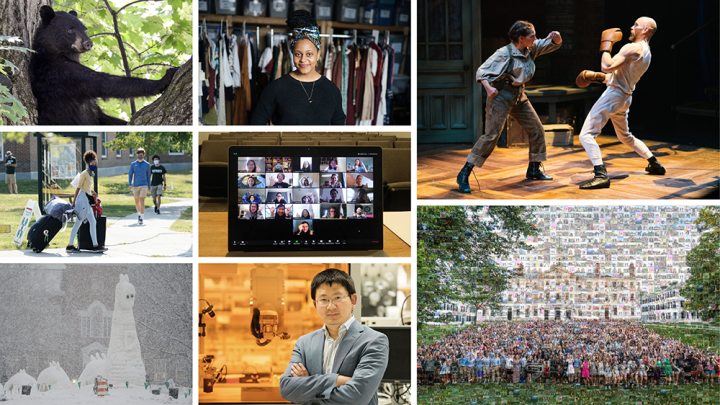 There is nothing like scrolling through headlines from the beginning of the year to drive home just how unusual 2020 has been—and just how well the Dartmouth community rose to meet unprecedented challenges, from the pandemic response to a campus visit from an ursine neighbor. As we close the door on 2020, here is a look at how Dartmouth News covered some of the key events on and off campus this year. 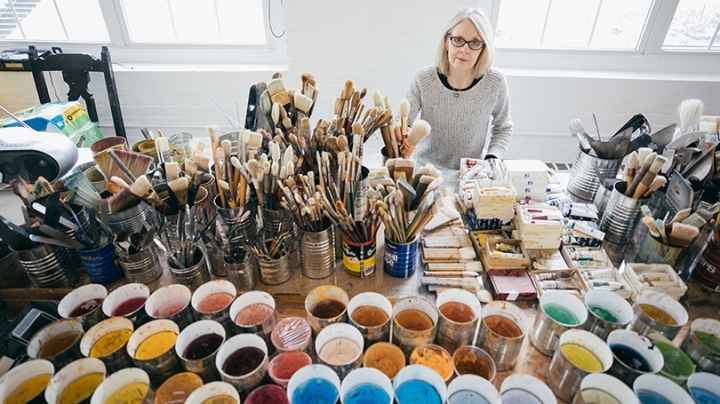 In January 2020, Professor of Studio Art Colleen Randall’s collection of paintings, “In the Midst of Something Splendid,” went on view at the Hood Museum of Art.

The year started off promisingly enough. In January, Dartmouth News introduced 30 new faculty members to the community—scholar-teachers specializing in everything from number theory and the ecology of food systems to 20th-century Russian literature and the archaeology of Indigenous American religions. Graduate and undergraduate students in Assistant Professor of Earth Sciences Marisa Palucis’ lab  looked for signs of life on Mars, while back on Earth, President Philip J. Hanlon ’77 traveled to Davos, Switzerland, where he met with alumni and participated in a series of interviews with business and other leaders ahead of the 2020 World Economic Forum.

Later in the month, Dartmouth leadership announced that it was “closely monitoring the outbreak of respiratory illness due to a coronavirus,” of which at the time there had been only a handful of confirmed cases in the United States.

In the meantime, Dartmouth hosted three representatives from the National Academies of Sciences, Engineering, and Medicine to discuss the findings of the academies’ 2018 landmark report, “Sexual Harassment of Women: Climate, Culture, and Consequences in Academic Sciences, Engineering, and Medicine,” which form the basis of Dartmouth’s Campus Climate and Culture Initiative, known as C3I.

At the Hood Museum of Art, students and community members posed in front of vintage tintype cameras, part of an installation by Diné photographer Will Wilson and the Critical Indigenous Photographic Exchange. And preparations for winter carnival—billed as “A Blizzard of Unbelievable Beasts”—went on as planned, as did the annual Martin Luther King Jr. celebrations, which featured keynote addresses from civil rights attorney, minister, and Harvard professor Cornell Brooks and award-winning poet, translator, and children’s book author Kianny Antigua, a senior lecturer in Spanish, and many other events. 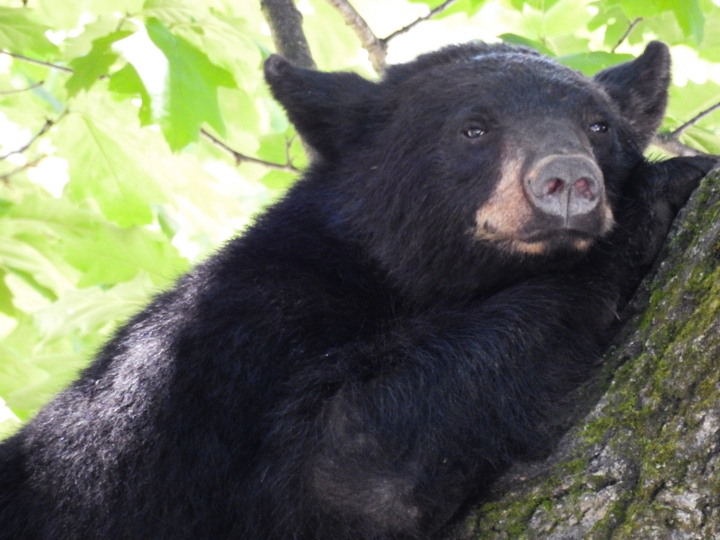 In July, a quiet campus was visited by a young black bear, who climbed a tree behind Parkhurst and hung out for a couple of hours. (Photo by Bruce Plummer)

And Then It Was (COVID) Spring

With COVID-19 beginning its first surge throughout the country, students were asked not to return to campus after spring break. Faculty and staff raced to find ways to convert classes to meet the demands of a newly virtual world, from developing a team-taught course on epidemics throughout history to bringing Upper Valley geology to remote learners to finding innovative ways to support virtual student theater productions. Undergraduate learning fellows were ready and willing to help, and students on the canceled winter Italian language study abroad program offered some words of wisdom.

The Hopkins Center for the Arts and the Hood Museum of Art found ways to engage audiences online, as did other centers and institutes on campus, and the College archivist looked to the past to see how Dartmouth weathered other troubled times. Meanwhile, Dartmouth researchers joined the international effort to learn as much as possible about the novel coronavirus, and the greater Dartmouth community looked for ways to help.

To keep the community up to speed on Dartmouth’s ongoing response to the pandemic, Provost Joseph Helble launched Community Conversations, an online forum in which he and other campus leaders regularly answer questions on operations and priorities.

As the Class of 2024 was invited to join the Dartmouth community, Lee Coffin, vice provost for enrollment and dean of admissions and financial aid, launched a new podcast to help high school students and their families navigate the college admissions process. And though the Class of 2020 could not gather on the Green for commencement, Dartmouth hosted a virtual celebration to confer degrees on the new graduates.

Over the summer, as remote learning continued for all undergraduates, a young black bear took advantage of the quiet campus, spending some quality time in a tree behind Parkhurst.

The Hopkins Center announced a new collaboration with the Dance Theatre of Harlem. National Book Award-winning novelist Phil Klay ’05 was in (virtual) residence as a Montgomery Fellow. Faculty and students continued to find new ways of teaching and learning. The community also found ways to engage with the Black Lives Matter movement in the wake of the murder of George Floyd.

By the end of fiscal year 2020, the institution had managed to close its COVID-related budget shortfall by about a third. 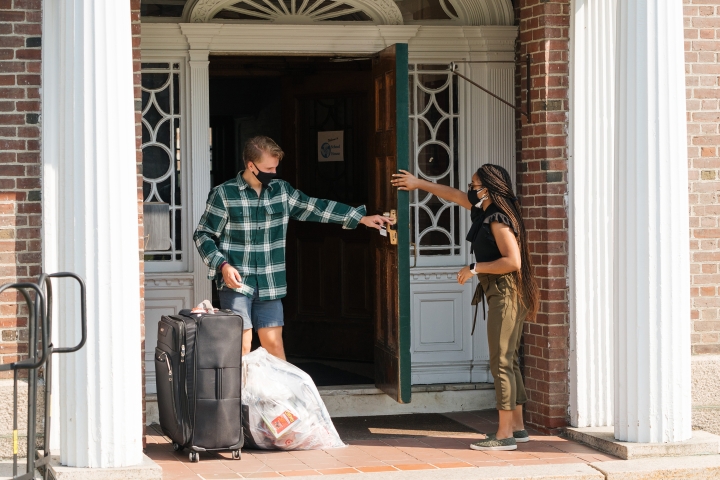 Half of the undergraduate student body—including the Class of 2024—returned to campus in September, braving a new world of COVID-19 testing, arrival quarantines, physical distancing, mask-wearing, new protocols for dining, and other changes aimed at protecting the greater Dartmouth and Upper Valley community. The ’24s experienced an unusual orientation, and learned about “cultivating a practice of disagreement” in the annual shared academic experience.

Most classes continued remotely, even for students on campus, and the innovations continued, from a serial writing project to theater mainstage production performed over the radio. The Hood installed a new outdoor sculpture by Ursula von Rydingsvard and continued to adapt programming for a hybrid fall, and the Hop offered a small-screen film series and tents for performance groups. The Magnuson Center for Entrepreneurship held a virtual Entrepreneurs Forum. 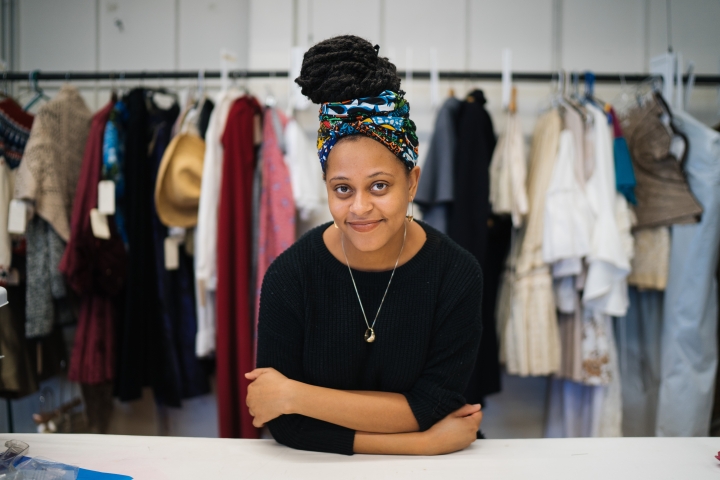 In this year of adaptations, members of the Dartmouth community continued to shine. Among those recognized for their achievements, Sydney Kamen ’19 received a Pickering Fellowship from the U.S. Department of State to pursue a career in foreign service. Grace Anderson ’20 was named a Gaither Junior Fellow, and four students and recent alumni were offered Knight Hennessey scholarships to study at Stanford University.

On campus, philosophy professor Samuel Levy was named associate dean of arts and humanities, and Jon Kull ’88 was tapped for a second term as dean of the Guarini School of Graduate and Advanced Studies. Eleven members of the faculty were named to endowed professorships, and six members of the staff earned Lone Pine Excellence Awards for their service to Dartmouth. President Hanlon tapped Sherman Fairchild Distinguished Professor of History Matthew Delmont as special advisor on faculty equity, diversity, and inclusivity.

And in the category of new ventures: Rena Mosteirin ’05, a poet and lecturer in the Master of Liberal Studies Program, took over ownership of Hanover institution Left Bank Books; Associate Professor of Computer Science Gevorg Grigoryan launched a biomedical startup; and the Robert Clements Professor of Democracy and Politics Russell Muirhead was elected to the New Hampshire State House. 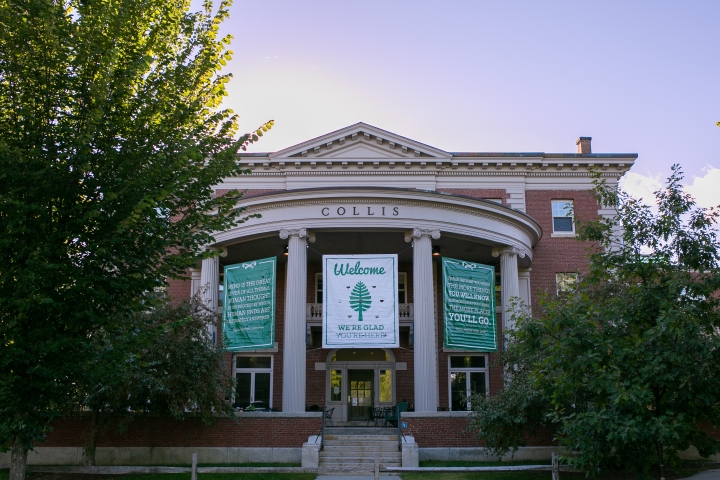 In January, remote classes resume, with about half of all undergraduates returning to campus. (Photo by Brelynn Hess)

Undergraduate classes begin remotely Jan. 7, and about half of undergraduates will return to Hanover Jan. 16-17. While COVID safety rules continue, Dartmouth leaders, students, faculty, and staff are seeking ideas for how to make the most of winter (send ideas to WinterTermSuggestions2021@Dartmouth.edu).