“Sleigh Ride” is the latest in a five-part series offering “little moments of light.”

With live performances on pause, members of the Dartmouth College Wind Ensemble have adopted a fresh approach to music-making designed to keep their audiences—and themselves—engaged.

The group is creating video renditions of selections by Leroy Anderson. A combination of music, movement, costumes, and animation, the series is a playful celebration of the 20th-century composer and conductor’s work. Sleigh Ride, the third and best known, was released this week.

Conductor Brian Messier, who also directs Dartmouth’s marching band and youth wind ensemble, says he hopes the five-part series will provide “little moments of light” during the pandemic, and give students something they are proud to be a part of.

The project has helped the musicians stay involved, despite being unable to meet for rehearsals, says Margaret Ferris ’22, a DCWE trumpeter tasked with building community within the ensemble, for an independent study course. “It gives everyone something to work on together.”

’The World We’re Living In’

The musicians use phones and computers to record their parts individually. Then, Messier, his staff, and students edit and combine the files.

“The conductor’s job is to connect musicians, repertoire, and the audience,” says Messier, who learned three software programs for the series. “Being an audio-editor-facilitator is kind of the equivalent of a conductor’s job in our current virtual environment.”

Thankfully, Messier says, a gift from Bruce J. Berger ’66 and Barbara S. Berger enabled him to hire several assistants, including students, to help with the complicated and time-consuming production process.

The wind ensemble usually includes about 50 students and community members. But with any geographic barrier removed, participation has grown to include alumni and guest performers from outside the Hanover area, a trend Messier hopes will continue. To encourage involvement, he has waived the audition requirement this year. Interested Dartmouth community members can email Messier.

That inclusivity, and acceptance of the reality of the online environment, “has been really special,” Ferris says. Messier’s attitude is, “This is the world we’re living in, so we’re going to make the most of it.”

’A Little Bit of Lightness’

While his compositions are sometimes dismissed as simple, and played without the seriousness they deserve, that approach overlooks their elegance and subtle sophistication, he says. In addition to highlighting beautiful pieces that are often given short shrift, the videos are helping the ensemble move forward “in a productive and purposeful way.”

John Heginbotham, a lecturer in theater and director of the Dartmouth Dance Ensemble, choreographed the first video, The Syncopated Clock, which features an audio recording from the DCWE’s February concert.

The musicians found delightful ways to express themselves in the video, he says. And the band’s spirit shines through: “This ensemble is about making music together, but it’s out of love and joy and fun, also.”

Heginbotham loves that Messier chose a composer whose music is happy, he says. “Everyone says it, that we need joy more than ever. But we are in a hard time. To give a little bit of lightness, a little sense of the connection that can come from making something collaborative, it’s a relief to have that as part of your life when things are so heavy.” 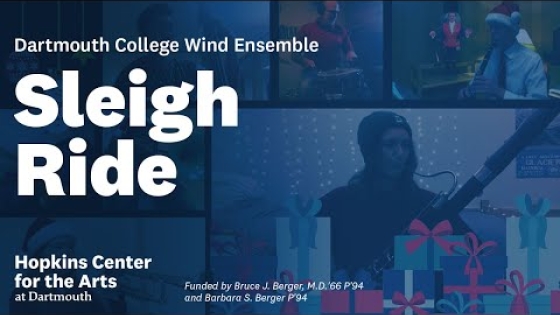