This year’s service awards celebration honors more than 260 staff members from across campus. 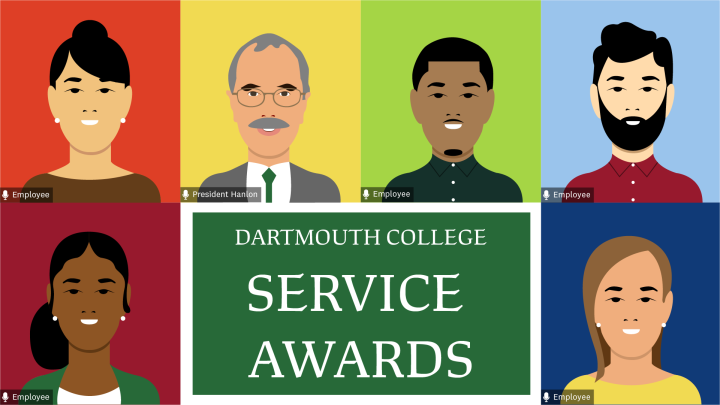 In a video created for the occasion, Dartmouth today honored more than 260 employees for their years of service. While the format of this year’s Employee Service Awards Celebration was unprecedented, its spirit of appreciation remained unchanged.

In previous years, staff members marking milestone anniversaries have been honored with meals at the Class of 1953 Commons. But due to the pandemic, the 2020 event took the form of recorded messages from nearly two dozen Dartmouth staff and faculty members.

In welcoming remarks, Scot Bemis, chief human resources officer, said this year “will be memorable for everyone,” and later lauded the employees for their roles in Dartmouth’s response to COVID-19.

“Many of you have been on the front lines throughout this pandemic, coming to campus on a daily basis to ensure the safety and well-being of the students and the rest of the community,” Bemis said during the four-and-a-half-minute-long video.

The faculty and staff recognized the employees’ many contributions, including the knowledge and expertise they bring to their jobs, their hard work, and their commitment to Dartmouth and to one another. As four-season footage of campus rolled on part the screen, the speakers celebrated the opportunity to live, work, teach, and learn at Dartmouth, and in the broader Upper Valley, as well. And they highlighted the dedication of the employees, whose lengths of service range from 10 years to more than four decades.

“It’s very moving to me to see so many staff who have given over such a long period of time to the institution,” said President Hanlon, sitting beside his wife, Gail Gentes. “I’m sorry that we’re not with you there in person.”

Bemis said the long-term employees are the “lifeblood of the organization.”

“I don’t really think we can say enough about those who have been here and are committed to being here a long period of time,” he said. “Thank you for your dedication, commitment, and service.”