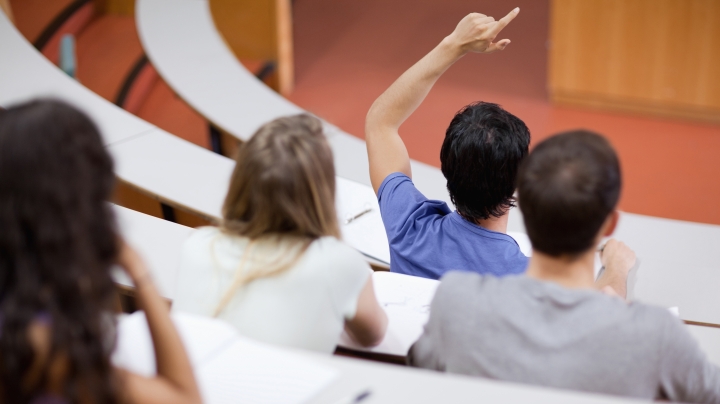 Men speak 1.6 times more often than women in college classrooms, revealing how gender inequities regarding classroom participation still exist, according to a Dartmouth study co-authored by Janice McCabe, an associate professor of sociology. By comparison, women are more hesitant to speak and are more apt to use apologetic language. The findings were published in Gender & Society.

When students didn’t have to raise their hands to participate in class, men spoke three times more often than women. “You would think that it would be more equitable for students to not have to raise their hands to speak in class because then anyone could talk, but our results showed otherwise. The higher level of participation relates to the idea of who may have felt like they were entitled to speak or had permission to do so,” says McCabe. “Once you take away the structure of a professor calling on students, you see more of the cultural expectations that people may have, and the gender hierarchies present in the college classroom today.”

For the study, McCabe and Jennifer Lee ’17, a sociology major whose senior thesis focused on this work and who is currently pursuing a PhD in sociology at Indiana University, sought out to find out if a “chilly climate” still existed in college classrooms. They wanted to see if things had changed following research in the 1990s on the topic by Myra Sadker and David Sadker. The term “chilly climate” was first coined by Robert M. Hall and Bernice R. Sanders in 1982, as part of their research on gender dynamics in the classroom.

Through 80 class sessions, Lee observed 95 hours of classes in nine courses in the humanities, social sciences and natural sciences. The class sizes ranged between 10 and 40 students. The gender ratio in the classes varied and five of the nine classes had a larger percentage of female students. Five of the nine classes were taught by women. The students’ and professors’ exact words and body language was observed, so that both the frequency and the context of engagement was documented. The researchers analyzed the data using a software that codes the behavior, which helped them identify patterns across the results.

In all nine courses, men spoke out without raising their hands more than women. Men used more assertive language and were more likely to interrupt others regardless of the gender make-up of the class or gender of the professor. Men also participated in more follow-up discussions (31 to 7) and prolonged conversation (28 to 3) with professors than women.

When professors took proactive measures to engage all students, such as by having clear parameters for participation or by deliberately calling on female students who had not had a chance to speak, this created an environment for a more equitable discussion.

In U.S. colleges, women outnumber men. McCabe adds that “Our results demonstrate that women’s voices still may not be heard, and that gender hierarchies continue to persist. Once students and professors are cognizant of these gender dynamics in the classroom, it is easier to change them.”