This year’s honorees include a staff member, alumni, and a student organization. 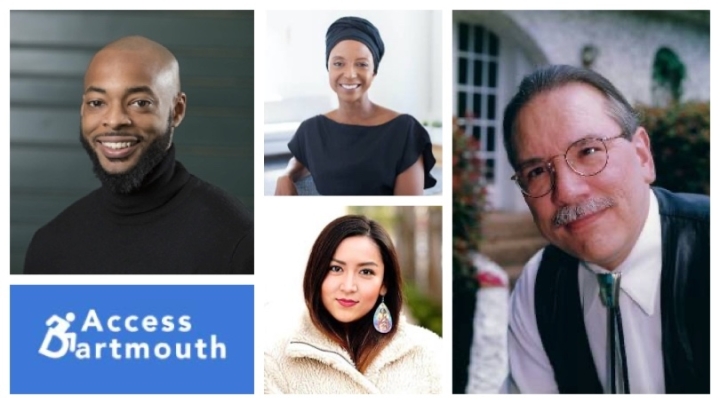 The recipients of this year’s Martin Luther King Jr. Social Justice Awards will be honored in a virtual award ceremony and panel discussion at 7:30 p.m. on Jan. 28. The event, Conversations with Changemakers, is part of Dartmouth’s annual MLK Celebration.

The awards are co-sponsored by the Martin Luther King Jr. Celebration Committee, the Office of Institutional Diversity and Equity, the William Jewett Tucker Center, the Center for Social Impact, and the Geisel School of Medicine. They recognize Dartmouth community members who have made significant contributions to the fields of peace, civil rights, education, public health, environmental justice, or social justice.

The 2021 honorees, described below, include a staff member, three alumni, and a student organization. Read more about the 2021 award winners.

A citizen of the Diné (Navajo) Nation from the Northern Agency of the reservation in Northern New Mexico, Allie Young ’13 is a storyteller and writer on a mission to increase authentic representation of Native Americans in TV, film, and mainstream media. To do that, she shares the stories and traditions of her people that have continually helped them persevere in a world where they are largely invisible, underrepresented, and misrepresented. She is founding director of Protect the Sacred, a grassroots organization whose focus includes educating and empowering the next generation of Navajo and Indian Country leaders and spreading the “Stay Home” message to protect tribal nations from COVID-19.

Young says working for social justice means fighting for people, and not losing sight of their humanity and compassion. “Even in entertainment, we tell the stories of real people and our experiences and the emotions that we go through,” which are “the best kinds of films,” she says. “That’s how we make impact, when we touch people in their hearts.”

Her motivation comes from her experience as a member of the Native American community, “which has been mistreated for far too long and invisible for far too long,” she says. “I believe in fighting for all people, but first and foremost, I’m always going to fight for my people, because there’s still a lot to learn from us.”

Alexandra “Alex” Bernadotte ’92 is the founder and CEO of Beyond 12, which uses personalized coaching and mobile technology to increase the number of traditionally underserved students who graduate from college and who translate their degrees into meaningful employment and choice-filled lives. The nonprofit works with about 100,000 students across the country and was named one of the world’s 10 most innovative education companies by Fast Company. Its MyCoach mobile app won the 2016 Xammy Award for best social impact app from Xamarin, a Microsoft-owned mobile development platform. Bernadotte holds a master’s degree in education from Stanford and has more than 18 years of executive management and strategic development experience in the nonprofit and private sectors. Her experience includes serving as executive director of The Princeton Review’s Silicon Valley office; executive director of Foundation for a College Education, a nonprofit college access program; and operations manager at the World Health Organization in Geneva, Switzerland. She is a member of the board of directors of Great Oakland Public Schools, the board of advisers of the Magnuson Center for Entrepreneurship, and Dartmouth’s Presidential Commission for Financial Aid. The numerous honors she has received include the 2011 NewSchools Venture Fund Entrepreneur of the Year award and a 2012 Jefferson Award for Public Service.

Reflecting on the meaning of social justice, Bernadotte points to a common misconception. While conventional wisdom says our social systems are broken and need to be fixed, over time she’s realized that’s not the case.

“Systems achieve the outcomes that they are designed to achieve. So, our education system is inequitable by design,” Bernadotte says. “For me, social justice is about redesigning our systems so that they are more equitable, they are more just, and they achieve outcomes for all of our citizens, not just a select few.”

A passionate advocate for health equity, Matias Vega, MED ’78, now retired, dedicated his career to working in impoverished and underserved communities. As a student at Dartmouth Medical School, now the Geisel School of Medicine, he received one of the inaugural Public Health Service Scholarships. He later served as a family physician in the National Health Service Corps, in Indianapolis, Ind., and was medical director for the Homeless Initiative Program in that city from 1988 to 1997. In 1998, he joined Albuquerque Health Care for the Homeless as medical director, and also worked with colleagues at the University of New Mexico School of Medicine to create and implement a curriculum focused on poverty and the social and political determinants of health, one of the first of its kind. An adjunct faculty member at UNM from 1998 to 2015, Matias was a frequent presenter at conferences and workshops and a contributor to clinical practice guidelines and other publications.

In 1989, the National Coalition for the Homeless recruited Matias to join its governing board. During his 13-year tenure as an NCH board member, Matias brought the issues of health care access and affordability to the anti-homelessness struggle. In 1994, he became a founding board member of the Health Care for the Homeless Clinicians’ Network.

His experience with the National Coalition for the Homeless had a profound impact on his work, Matias says. “It changed my perspective as a clinician working in an underserved community to understanding much larger issues and social justice and equity, and that at the heart of everything we did, everything that we needed to do to end homelessness, had to be social justice.”

Vincent Wilson is an assistant director of individual and class giving for the Dartmouth College Fund and the Diversity and Inclusion Advisor for Dartmouth Athletics. He also serves on working groups within the DCF to help create a more diverse and inclusive work environment, and on the planning committee for the Black Caucus. Wilson holds a bachelor’s degree in sports management from California University of Pennsylvania, where he ran track and became a member of Omega Psi Phi Fraternity. He earned a master’s degree in sports management from Western Illinois University.

Wilson is active in the community, serving as a mentor to student-athletes and volunteering at a local high school, where he works with students of color and their teachers to create a more inclusive environment. His background as a student-athlete is what inspires him to mentor current student-athletes and help prepare them to be successful in college and after they graduate.

For Vincent, social justice means working toward equity for everyone, and taking steps, however small, “to move the needle forward.”

It’s a matter of using whatever opportunities “or gifts that you may have,” he says. “Everybody has the ability to be a change-maker. If you go outside and you see someone’s in distress, or you see someone’s hungry and you hand them some food, you’ve positively impacted somebody. You’ve caused change.”

Access Dartmouth serves as a mentorship organization for incoming students with disabilities and access challenges and helps ease their transition to Dartmouth. The student organization also engages in accessibility advocacy and activism on campus. By creating a strong, centralized disabled community and enacting structural change, they hope to build an environment that is more supportive of students with disabilities.

Morgan Ellingson ’23 is one of the group’s two co-presidents. For Ellingson, a cognitive science major, social justice includes recognizing that certain factors, such as transportation methods, are beyond people’s control, “and doing what you can to make sure those things don’t disadvantage someone.”

“It also involves having spaces where there are ways for people to access the same opportunities,” she says.

Co-president Bill Cheng ’22 emphasizes the importance of ensuring that everyone has the resources they need to perform at the same level.

“A lot of people are afraid of change and of shaping things differently to suit people with different needs,” the government major says. “Social justice is making sure that everyone has a chance to try what they want and do what they want and take whatever path they want in life.”