A Dartmouth computer science group has advanced to the finals of an XPRIZE challenge to tackle the pandemic. 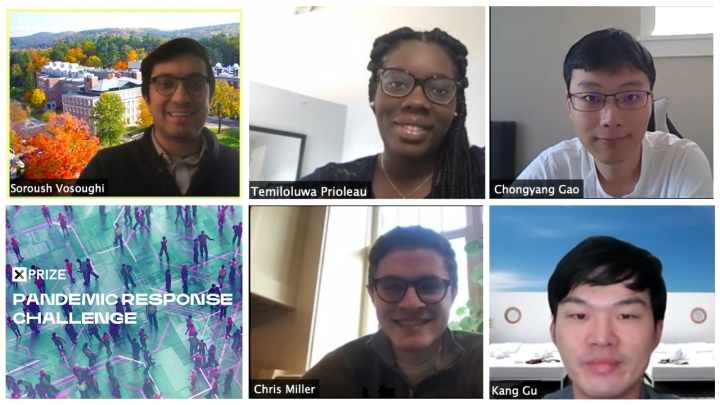 When the global science contest XPRIZE challenged researchers late last year to design a machine-learning tool to predict the spread of COVID-19, Soroush Vosoughi, assistant professor of computer science, was disappointed not to have time to participate.

But the possibility of being able to make a difference stuck with Vosoughi. After giving it further thought, he was reminded of some guiding principles: “If there is an opportunity take it,” says Vosoughi, “and data-driven, empirical approaches are usually the best.”

With data and empiricism as his guides, Vosoughi filled out the XPRIZE application and submitted the $100 fee. Dartmouth’s “Big Green” team was officially entered in the competition.

To round out the team, Vosoughi brought together Temiloluwa Prioleau, an assistant professor of computer science; Kang Gu, Guarini ’23; Chongyang Gao, Guarini ’21; and Chris Miller ’20.

“It felt amazing to do something to try to make an impact,” says Vosoughi. “Even if we had no chance of winning, it would be great to help just one person.”

The first phase of the competition called for teams to create an algorithm that makes daily predictions on the global spread of the pandemic over a one-month period. Those predictions were then judged for accuracy against official data.

Working around personal schedules, the holiday season, and remote realities, the Dartmouth team designed a model that is currently predicting the pandemic’s spread with an average error of only 239.2 cases per 100,000 people. In the months ahead, the Big Green algorithm indicates an increase in the number of cases and then a flattening of the curve.

Earlier this month, XPRIZE notified Vosoughi that the Dartmouth team was running in third place for the initial challenge. Not only would Big Green move on to the final test, the team was within striking distance of the prize.

“We work on a lot of models in my lab, but actually making predictions for such an important problem was surreal. It was great to see our models do so well in a real-world situation,” says Vosoughi, who is also a member of Dartmouth’s Institute for Security, Technology and Society.

“This was an important opportunity to take on a public health crisis while also advancing my ongoing research on COVID-19,” says Prioleau. “It’s been particularly pleasing to work with students that exhibit so much drive and motivation.”

For the final challenge, teams will develop a model that recommends public health actions based on the earlier predictions about the pandemic’s spread, such as mandating masks or limiting public gatherings.

Vosoughi expects the next phase of the contest to be even more difficult. To tackle the challenge, he’s relying on another set of guiding principles. “Don’t overthink things,” Vosoughi says, “and rely on your strengths as a team.”

The winners of XPRIZE’s $500K Pandemic Response Challenge sponsored by Cognizant will be announced in late February.