Community Conversations: Light at the End of the Tunnel? 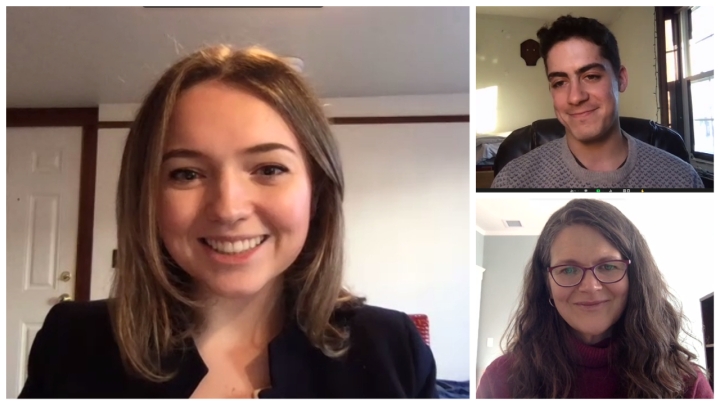 Watch the Feb. 17 Community Conversations webcast with Provost Joseph Helble, Dean of the College Kathryn Lively, and the president and vice president of the Student Assembly.

With all the disclaimers to be expected during a highly unpredictable pandemic, Provost Joseph Helble told viewers of this week’s Community Conversations broadcast that “as of today, our planning is for an operational, in-residence, normal fall term.”

Helble was joined this week by Dean of the College Kathryn Lively and the president and vice president of the undergraduate Student Assembly, Cait McGovern ’21 and Jonathan Briffault ’21, for a conversation on how students have informed Dartmouth’s decision-making during the pandemic, moderated by Vice President for Communications Justin Anderson.

’A Lot of Caveats’

The prediction that Dartmouth might be able to return to full operations in fall 2021 depends in large part on the campus maintaining or decreasing what Helble calls the “very low” positivity rates for COVID-19 that the Dartmouth community has seen for much of the year—and on the expectation that much of the community will have received vaccinations by the end of the summer.

“There are a lot of caveats, and it may turn out that we are able to increase the number of students on campus substantially but not get to 100%,” Helble said. “It’s simply too early to answer that question. But we’ve structured our decision-making process in a way that will give us a maximum amount of time to make data-driven and thoughtful decisions in support of that goal.”

And as more members of the community receive vaccinations, Helble said, he expects Dartmouth to use summer term—when there are fewer students on campus even in normal years—“as a transition towards more in-person educational opportunities.”

That said, while Dartmouth’s COVID-19 numbers have decreased recently, with no new positive tests or confirmed cases in the past five days for students, nor in the past eight days for employees, Helble said the risks posed by new virus mutations require caution.

To that end, summer off-campus programs have been canceled, including foreign study and language study abroad programs as well as travel-based leave-term programs supported by Dartmouth for undergraduate and graduate and professional students.

And Helble confirmed that travel restrictions make it “highly unlikely” that visitors will be able to attend the graduation celebration being planned for this spring for students on campus.

Speaking of the community’s willingness to “embrace winter,” Helble followed up on a promise he made during the Feb. 3 Community Conversations—to personally test out the new skating rinks on the Green. He made good on that promise late last week. 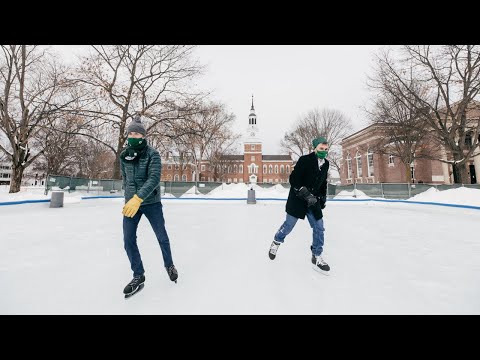 Of the experience, Helble said, “I learned three things: First, I don’t skate nearly as well as I remember. Second, I was reminded of how great it is just to be outdoors, in this incredible setting, on this campus, on the Green.”

Finally, he said, he’d discovered just how much use the rinks and other outdoor facilities have seen since they opened a few weeks ago: In that time, Outdoor Programs staff have rented out more than 1,700 pairs of skates and 1,200 snowshoes, tubes, and sets of cross-country skis. He commended the staff of Facilities, Operations & Management, Athletics, Conferences and Events, Student Life, and Outdoor Programs, as well as the Town of Hanover, for helping to “make all this possible.”

Student Assembly president McGovern said the new ice rinks and other opportunities to get outdoors this winter have been popular with students.

“In the past we never had fire pits or ice rinks on the Green, and now that we have them, I can’t imagine Dartmouth without them,” she said.

Asked about challenges students have faced during the pandemic, McGovern said, “Every student is coming with a different set of experiences, but most of the issues that we’ve heard about from students are related to three categories: mental health, academics, and social life.”

Vice President Briffault said the Student Assembly has worked closely with the administration to advocate for students during the pandemic.

“Sometimes we don’t want the same thing, or we want more than can be given, but it’s fair to say they are always productive discussions that center on how we can best protect and help students and the College,” Briffault said.

Lively said that these discussions with student leaders have “pushed administrators to think about things from a student perspective that we might have just missed. So that has been really helpful and very much appreciated.”

Other topics discussed in this week’s broadcast:

Community Conversations is a live production of Dartmouth’s Media Production Group and the Office of Communications that airs on selected Wednesdays at 3:30 p.m. The next show airs March 3.

For the most recent information on Dartmouth’s response to the pandemic, visit the Dartmouth Together COVID-19 website.