Drone and Landsat Imagery Shows Change in the Namib Desert

A study using drone and satellite imagery finds vegetation cover has increased along the Kuiseb River.

Mountain zebra near the Kuiseb River in the Namib Desert. (Photo by Oliver Halsey)
2/08/2021
Body

In the Namib Desert in southwestern Africa, the Kuiseb River, an ephemeral river that is dry most of the year, plays a vital role. It provides most of the vegetation to the area and serves as a home for the local Indigenous people and a migration corridor for many animals. A Dartmouth study published in Remote Sensing finds that the overall vegetation cover increased by 33% between 1984 and 2019.

The study leveraged recent drone imagery and past satellite imagery to estimate past vegetation cover in this linear oasis of the Kuiseb River, a fertile area in the middle of one of the driest deserts on the Earth. The findings are significant, as this is the first study to reconstruct decades of vegetation change over a long stretch of the river, rather than at just a few sites.

The research was based on a senior thesis project by Bryn Morgan ’17, the first author of the study; she has a bachelor’s degree in geography and chemistry and is now a PhD student in the WAVES Lab at the University of California, Santa Barbara. She first visited the Namib Desert, which is located along the coast of Namibia, in 2015 as part of the environmental studies foreign studies program, led by study co-author Douglas Bolger, a professor and chair of environmental studies at Dartmouth. Morgan returned to the region on her own in 2016 to conduct this research while working out of the Gobabeb Namib Research Institute,  and continued the work after graduating from Dartmouth.

The study area consisted of a 112-kilometer stretch of the lower Kuiseb River, which comprises 12 sites along the river, each of which was 500 meters wide. At each site, Morgan flew one to four unmanned aerial vehicle or drone flights to capture images of the woody vegetation cover along the river. One drone flight would take images with true color and then another flight would take images with false color using near infrared wavelengths of light, which are outside what our eyes can see. False color imagery allows researchers to distinguish vegetation from sand and soil, and differentiate the various types of vegetation and how healthy it may be. 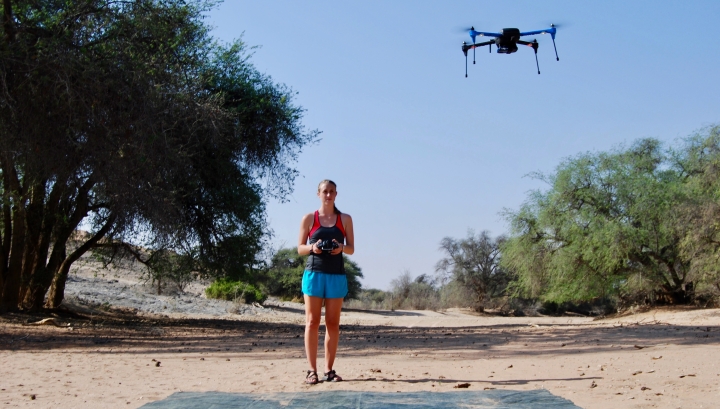 Bryn Morgan flying a drone on the Kuiseb River in the Namib Desert. (Photo by Oliver Halsey)

The drone imagery revealed that five species of trees are part of the vegetation cover in the area: Acacia (Vachellia) erioloba, Faidherbia albida, Euclea pseudebenus, Tamrix usneoides, and Salvadora persica. A. erioloba and F. albida have been named national conservation priorities and their pods are an important food source to the livestock of the Topnaar (≠Aonin), the indigenous people who live along the Kuiseb River. The Kuiseb also serves as a habitat and migration corridor for many animals, including the mountain zebra, leopard, and ostrich.

Based on the 2016 data, the research team created a model that calculated the fractional vegetation cover of the lower Kuiseb River based on raw reflectance values. By matching past satellite images for the previous 30 years to the present-day imagery, and then applying the same model, the team was able to estimate past and vegetation cover. “Essentially, the drone data worked as a bridge from the ground to what the satellite was seeing,” explains co-author Jonathan Chipman ’90, director of the Citrin Family GIS/Applied Spatial Analysis Laboratory at Dartmouth. “Our methods in the study provide a model for how ecologists can combine modern drone imagery and historic satellite data to reconstruct past environmental change.”

The results showed that one area of the Kuiseb River located between 110 and 140 kilometers upstream from the Atlantic Ocean in the terminal alluvial zone, which is typically dry but within the reach of floods and where soil sediments are deposited, not only had the highest vegetation but also had the most positive change in vegetation cover over the study period.

“Our findings demonstrate that vegetation cover in the lower Kuiseb River has been, on average, increasing for more than three decades,” says Morgan. “As a result, we provide new insight into not only the long-term change in the hydrology and ecology of this system but also into how ephemeral rivers in desert landscapes might be responding to global change.”

The research team examined the climate and hydrological records to see if increased precipitation between 1984 and 2019 may explain the overall change in vegetation cover; however, the records did not show such steady increases in precipitation. According to the co-authors, the increase in vegetation cover may reflect a long-term recovery from the drought in the Namib Desert during the early 1980s, which could be investigated by using coarser-resolution satellite data prior to 1984.

In addition to Morgan, Chipman, and Bolger, James Dietrich, a Neukom Fellow at Dartmouth at the time of the study and now an assistant professor in geography at the University of Northern Iowa, served as a co-author of the study.