The student-led Meetinghouse is a professional venue for creative writing. 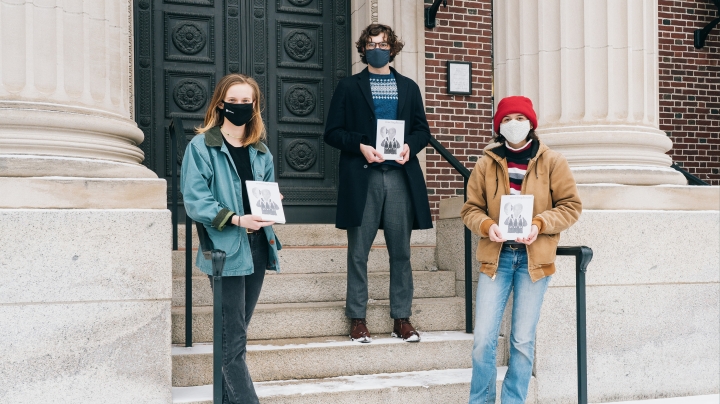 A group of undergraduates has launched Meetinghouse, a new literary magazine devoted to publishing creative writing from around the country—and even the world.

The name invokes the traditional gathering places of New England, says editor Ethan Weinstein ’21, an English major from Newton, Mass. “We wanted to create a journal that would allow different types of people who might not otherwise be writing in the same place to have their voices bounce off each other and resonate.”

Many colleges are home to prominent national literary journals, but to Weinstein’s knowledge, Dartmouth has never hosted one before. He and co-editors Frances Mize ’22 and Avery Saklad ’21 saw this as an opportunity.

“A lot of our peer institutions have journals that publish professional work, and have opportunities for students to be involved,” says Mize, a double major in English and anthropology from Atlanta. “But I think it is rare for a publication like this to be run by students.”

To get started, the students sought advice from Peter Orner and Alexander Chee—both acclaimed writers who teach in the Department of English and Creative Writing.

Orner, the Dartmouth Professor of English and Creative Writing and author of several novels and short story collections, including, most recently, Maggie Brown and Others, helped the group apply for funding through the Leslie Center for the Humanities—a grant that supported printing costs for the first issue and, crucially, allowed the student editors to pay contributing writers for their work.

“As soon as we got the grant from the Leslie Center, it felt extremely real,” says Saklad, an environmental studies major from Cary, N.C.

Chee—an associate professor whose three books include two novels and the essay collection How to Write an Autobiographical Novel—has extensive experience with literary organizations, and helped launch the nationally circulated magazine The Common when he was a visiting writer at Amherst College.

Of advising Meetinghouse’s editors, Chee says, “I taught the students something about the tradition of the student-led literary magazine, and had them reach out to other magazines that began this way.”

In addition to reading and networking with other journals, the students contacted writers they admired, asking for submissions.

“We had this cold-call email that was like, ‘We’re starting a publication and we love your work. Would you send us something?’ That went on throughout the winter,” Mize says.

“I’m a pretty shy person, so it felt unnatural for me to be reaching out to all of these intimidating literary professionals,” Saklad says. “But I came to realize the worst thing that they can do is not respond or say no, and it’s really fine if that happens.”

Weinstein says solicited works ultimately made up about a third of the finished issue, and helped the editors ensure that they had a broad range of voices represented.

When they opened the journal for general submissions in the spring, Chee, whom Mize describes as “Twitter famous,” retweeted the group’s call for submissions to his 80,000-plus followers—outreach that helped generate more than 1,200 submissions of poetry, prose, and hybrid work, “from established writers to retirees’ first stabs at writing,” Mize says.

By that point, the COVID-19 pandemic had forced Dartmouth to switch to remote classes. The Meetinghouse editorial team—which included Andrew Binder ’21 as science editor, Jordan McDonald ’21 as contributing editor, and Charles Pike ’22 as a poetry reader—continued to meet by Zoom, reading and ranking submissions in a shared Google Drive.

“We split up who would read what alphabetically, and then we each reach each other’s favorite pieces,” says Saklad. “At the end, we each decided to champion a few pieces—we each came with a prepared speech about why we wanted to include them.”

“We read all summer,” Mize says. “It was exhausting and really fun. We read some beautiful writing. It was humbling to see such a wide range of work submitted from that general call. I felt a sense of responsibility to the writing that I did not foresee.”

Carson Levine ’21 developed the design for the print edition and the website, on which readers can find several of the poems and stories from the first issue. The issue is also available for purchase on the website.

Orner calls the creation of a student-run, national literary journal at Dartmouth “terrific and overdue.” He describes the first issue as “a wide-ranging, diverse, and exciting collection of work. Meetinghouse is already, right off the bat, discovering important new voices.”

For students, “editing a journal teaches invaluable skills, not least of which is close reading, attention to detail, and developing a sense of how one poem or story or essay plays off another to create a cumulative effect,” Orner says. “I’m flat-out impressed. These young editors have created a framework for a lasting contribution to the literary arts at Dartmouth, and the impact will reach far beyond Hanover.”

Chee agrees. “A magazine is a multivalent teaching tool, offering an education in reading the slush pile and the experience of editing, copyediting, and proofing submissions for publication,” he says. “It teaches mentoring, collaboration, and literary community. And it teaches the ethical economics of art: These students fund-raised so as to be able to pay contributors and still brought the first issue in under-budget. I’m incredibly proud of what they’ve accomplished.”

Of what he’s learned from launching Meetinghouse, Weinstein says, “This process began with the question: Why doesn’t this exist? And the answer we received was: ‘Because no one has made it exist yet.’ So I learned that if you think that something should happen, you can make it happen.”

General submissions for the second issue will be open soon. In the meantime, the Meetinghouse team plans a series of Zoom readings, featuring contributors to the first issue, on Feb. 24, March 3, and March 10. Register here for the Feb. 24 event at 5 p.m.