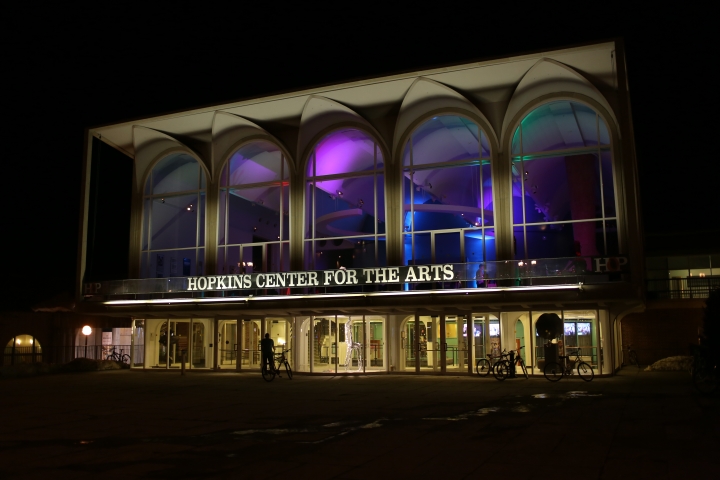 Dartmouth today announced that it has selected the renowned design practice Snøhetta to lead the expansion and redesign of the Hopkins Center for the Arts. Since its opening in 1962 as the first major university-based center in the U.S. to unite the arts under a single roof, the Hop has been recognized for its groundbreaking approach to arts education and the presentation of performances by leading and emerging talents across dance, music, theater, film, and other creative disciplines. The upcoming expansion, led by Snøhetta’s New York City office, is part of a broader reimagining of the Hop to support greater and more ambitious creation of cross-disciplinary work on-site and to meet the growing demand of students and faculty for artistic expression and experiences. Dartmouth plans to raise approximately $75 million for the project, with $70 million earmarked for design, construction, and other related development costs and $5 million dedicated to programmatic growth. Early enthusiasm for the project has led to $25 million of the goal having been reached to date.

Originally designed by modernist Wallace K. Harrison, the Hop lives within the Arts District at the heart of Dartmouth’s thriving academic community, which includes the Hood Museum of Art, redesigned by Tod Williams and Billie Tsien Architects in 2019, and the Black Family Visual Arts Center, completed in 2012 by Machado Silvetti. Dartmouth selected Snøhetta for the Hop project because of their extensive experience in honoring historic architecture and seamlessly merging it with forward-looking design. The architecture firm’s expertise in creating dynamic relationships between interior and exterior spaces and with existing built and natural landscapes was equally important to the decision. The re-imagining of the Hop marks a new milestone in Dartmouth’s decade-long, more than $180 million investment in its Arts District, and is also part of College’s eight-year, $3 billion The Call to Lead campaign, which aims to dramatically expand experiential learning opportunities within Dartmouth’s liberal arts educational model.

“The Hop has long served as a leader in the arts, bringing the voices of an incredible range of artists to our region and cultivating an academic experience that positions creativity at its core. As we look to the future, we are committed to establishing new spaces and opportunities that will enable artistic ideas to flourish and be realized within our community,” says Mary Lou Aleskie, the Howard L. Gilman ’44 Director of the Hopkins Center for the Arts. “We are excited to embark on this project with Snøhetta, whose experience, knowledge, and enthusiasm make them an ideal partner, and to realize the full potential of the Hop as an iconic 21st-century center for collaboration, education, and experiences.”

Design Priorities for the Future

Snøhetta, which was founded on a vision of transdisciplinary thinking, will bring to bear its extensive experience with some of the world’s most notable public and cultural projects, including the Alexandria Library, the Isabel Bader Centre for the Performing Arts, the Oslo Opera House, the San Francisco Museum of Modern Art expansion, the National September 11 Memorial Museum Pavilion, and the upcoming Theodore Roosevelt Presidential Library.

In active collaboration with Dartmouth leadership, Snøhetta will develop plans to expand the Hop’s existing physical footprint, which is currently nearly 175,000 square feet, and enhance the flow and function of interior and exterior spaces. Together, these efforts will improve the Hop’s ability to serve as an active site for gathering, study, and creative experimentation. The design development process is also particularly focused on ensuring Dartmouth’s ability to produce works onsite, recognizing the evolving needs of student creators and visiting artists, and on enhancing the audience experience overall. Among Dartmouth’s particular design priorities are the:

Equally important to the project is understanding and engaging environment and history. Snøhetta is recognized for its expertise in creating new spaces within existing contexts, invigorating and celebrating the best of what is already there. This approach will honor the Hop’s original architecture, while establishing new design synergies within and across the expansion as well as with the other buildings in the Arts District and the broader campus landscape.

“We’re especially excited to collaborate with the Dartmouth team, as their vision for the Hop aligns with our own strengths in unlocking the value of design and connecting people with places,” says Craig Dykers, founding partner of Snøhetta and its New York office. “Particularly in arts and cultural projects, our transdisciplinary approach opens up unexpected possibilities for engaging both audiences and artists.”

The Hop’s Creative Legacy and Program

When it opened nearly six decades ago, the Hop created a new model for a university arts center, bringing together the different creative disciplines under a single roof to foster newfound collaborative dialogues and engagements. Through time it has remained committed to this approach and underlying vision, working with world-renowned artists, giving a platform to emerging talents, and inspiring artistic innovation among its students. A vital creative hub, it welcomes approximately 70,000 people annually to its live performances, and in the new pandemic moment, has created a robust digital program to continue to connect with its immediate community and those around the globe. The Hop also mounts approximately 50 student performances and productions each academic year, and more than 300 students participate in dynamic performing ensembles led by professional artists. Additionally, approximately 1,600 students create work in the Hop’s jewelry, woodworking, and ceramic studios each year.

The Hop has served as the early training ground for alumni who have gone on to have distinguished careers in arts and entertainment, including actors Connie Britton ’89, Rachel Dratch ’88, and David Harbour ’97, and film and television producers Mindy Kaling ’01, Chris Meledandri ’81, and Shonda Rhimes ’91. The Hop maintains ongoing creative partnerships with the New York Theatre Workshop and the Telluride Film Festival and is the place where American modern dance company Pilobolus was founded.

Today, it is continuing to engage with the most relevant issues of our era. Most recently, this has included the launch of a three-year collaboration with Dance Theatre of Harlem, which will expand experiential learning opportunities in dance and academic scholarship and focus on conversations about race, activism, and equity in and through the arts. The Hop is also producing, with co-commissioning by Stanford Live, The Ritual of Breath is the Rite to Resist, an interactive opera-theater experience that responds to the murder of Eric Garner. The performance features poet Vievee Elaure Francis, an associate professor of English and creative writing; painter Enrico Riley ’95, a professor of studio art; composer Jonathan Berger; and director Niegel Smith ’02.

The upcoming expansion and reimagining of the Hop will further catalyze the production of such ambitious projects and provide new and versatile spaces for the growing artistic demands of contemporary performing artists and Dartmouth students. The Hop project follows Dartmouth’s $55 million investment in the Black Family Visual Arts Center and $50 million for the redesign and expansion of the Hood Museum of Art.

“We aspire for every Dartmouth graduate to be an imaginative thinker and creative leader. This makes the arts an essential aspect of any liberal arts experience. At Dartmouth, we are committed to this core vision and to engendering a love for exploration and experimentation among our students,” says President Philip J. Hanlon, ’77. “Our investments in the Arts District are envisioned to give every student an artistic experience and to use the arts as a window to explore a breadth of subjects and academic fields. The expansion of the Hop is another important chapter in enacting our vision and will offer a wealth of new opportunities for our students and the community well beyond.”