Idol Semifinalists Take Their Songs to the Screen

The audience can vote for five finalists through March 12. 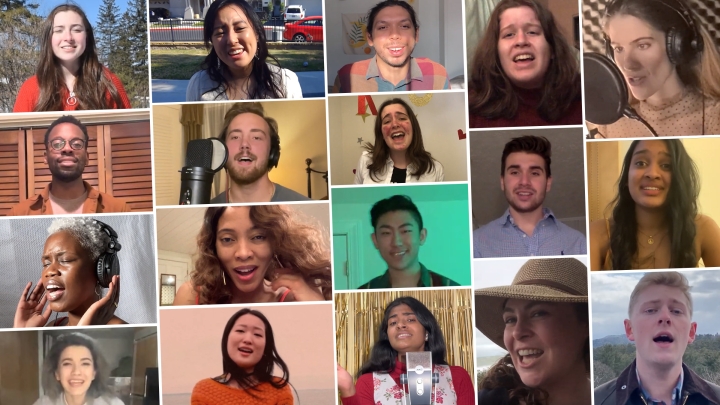 This year’s field of 20 Dartmouth Idol semifinalists includes undergraduates as well as students from Tuck and Geisel. (Photos courtesy of the performers)
3/02/2021
Body

An all-virtual format for this year’s Dartmouth Idol means fans can watch—and weigh in—from home as the contest unfolds. That includes the two-part semifinals, which aired at 8 p.m. on March 4 and March 5. The shows will remain available on demand for a week, during which viewers can also vote by text for up to five of their favorite performers.

“It’s still going to be the usual Dartmouth Idol experience, but done virtually,” Walt Cunningham, the founder and music director of Dartmouth Idol, said during a fall episode of the webcast Community Conversations. Due to the online format, “we’re creating much of the experience in the filming.”

The events showcase the talent of 20 singers, chosen from about 50 contestants. Their performances, spread across the two evenings, feature music ranging from classical to contemporary. A panel of judges, and the audience, will determine which six students go on to the finals in May.

This year’s competition has been reimagined as a series of virtual episodes. The series kicked off in January, with The Journey Begins. The 43-minute video offers a behind-the-scenes look at the popular contest, including footage from the semifinalists’ auditions and from previous Idol competitions, with commentary by Cunningham and former and current participants.

In previous years, Idol tickets often sold out. But thanks to the all-virtual format, an unlimited number of viewers can tune in to the shows on the Hopkins Center for the Arts’ YouTube channel. Tickets for the semifinals are available through the Hop, which sponsors the competition. They are free for students and Hop members, but registration is required. There is a “pick your price” option for the general public.

Known as a friendly, high-energy contest, Dartmouth Idol is open to shower singers and seasoned musicians alike. Traditionally an undergraduate competition, it attracts competitors from across the College. This year, however, graduate students were also encouraged to try out, to provide “a greater sense of community and connection for the campus at large,” Cunningham says in The Journey Begins.

Rather than auditioning in person, last fall’s hopefuls submitted videos of themselves singing.

Many were recording themselves for the first time, using unfamiliar technology and software, Cunningham says. “This is a different world.”

With that in mind, participants have also had access to tutorials, learning guides, coaching sessions from faculty, staff, and alumni, as well as additional support throughout the process.

“We give them permission to say, ‘This is hard. This is not comfortable,’” Cunningham said during Community Conversations. “We get it’s going to be hard. We acknowledge that, but we just try to encourage them.”

Pandemic, quarantine, and virtual world aside, “the auditions did not disappoint,” he says in the Journey Begins. “The talent, it was amazing.”

Here are the Dartmouth Idol 2021 semifinalists: