Students say team-building efforts have paid off, both in and out of the courtroom. 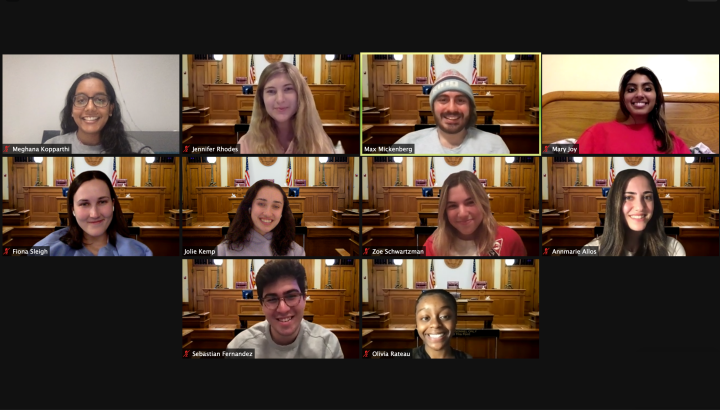 In addition to studying all things legal, students in the Mock Trial Society are committed to helping new teammates feel at home. This year, the society has hosted online socials, physically distanced walks, and other activities. And it has continued a tradition of pairing new members with seasoned cohorts, who make special efforts to welcome them.

That focus on building relationships has paid off, both in and out of the courtroom, the students say.

Every winter, the club sends two teams to regional competitions hosted by the American Mock Trial Association. This year, for the first time since 2007, both teams won bids to the Opening Round Championships Series, to be held online on March 20 and 21. The top teams from each of several ORCS tournaments will be eligible to compete in the National Championship Tournament in April.

Mock Trial Society President Jolie Kemp ’21 has made a point of bringing in formal support from various sources, including an alumnus who is a lawyer. And Herschel Nachlis, a research assistant professor of government who became the group’s adviser last fall, has mock trial experience, says Kemp, a government and French major, and co-captain of Orion, one of the society’s two teams.

Over time, team members have been able to fine-tune their skills and form close friendships, she says. “I think it’s a combination of those two things that has really led to our success.”

Nachlis, who also is a policy fellow at the Nelson A. Rockefeller Center for Public Policy, says what the students have accomplished is “really impressive, especially this year.”

“College mock trial thrives on teamwork, and achieving collaborative success over Zoom is truly to our Mock Trial Society students’ credit,” says Nachlis, who teaches “Law, Courts, and Judges” and captained a mock trial team as an undergraduate at Macalester College. “This was all through their own hard work—while some other schools’ programs have full-time coaches, Dartmouth’s is entirely student-driven.”

Before the regionals, Nachlis provided feedback on a practice trial.

“One thing that really stood out to me during a practice round, that shows just how prepared they were, is how the students sitting in as judges issued rulings,” he says. “Their on-the-spot rulings revealed incredible thoughtfulness and rigorous reasoning, and these stand-in judges weren’t even formal participants in that practice round, they were just there to help out.” 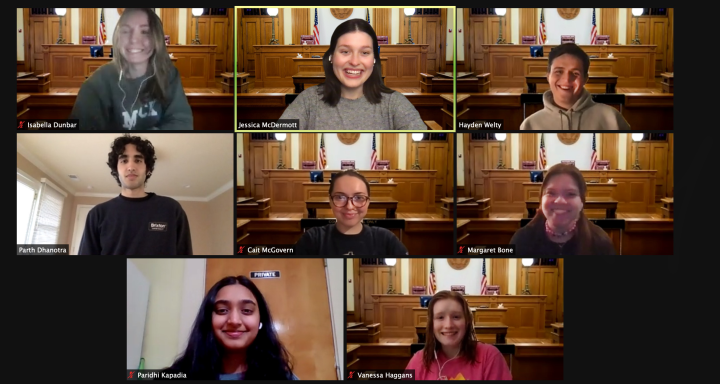 The Mock Trial Society’s teams Pegasus, pictured here, and Orion were among six of 20 teams at regional competitions to earn bids to the Open Round Championships. Sebastian Fernandez ’24 won the Outstanding Witness award. (Screen shot by Jessica McDermott ’21)

Team member Sebastian Fernandez ’24 says being able to find his niche on campus has been helpful, particularly given this year’s circumstances. “I was really excited to be part of the team, to be welcomed and know I had a place at Dartmouth where I could express myself and learn from other people,” says Fernandez, who plans to major in geography. “It’s been good to have that outlet and that space, and to have them not only as team members but also as friends.”

“If one of our mock trial alums is working in law or consulting or government, or whatever it may be, current members can reach out to them,” says Schwartzman, a government major and co-captain of Orion.

At the upcoming ORCS, members will put their skills to the test, acting as either attorneys or witnesses in mock trials with many of the elements of a real courtroom. The case, which they started working on last summer, involves a death that may have been caused by pesticide poisoning.

Balancing preparation for finals and for the competition has been a challenge, but “everyone’s really excited,” says Bella Dunbar ’23, an economics major and co-captain of the Mock Trial Society team Pegasus.