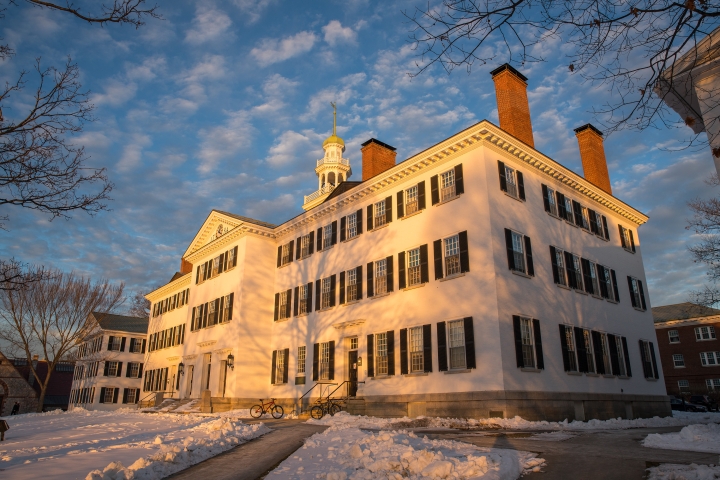 Three of Dartmouth’s longstanding academic programs—environmental studies, linguistics, and Native American studies—are now officially departments, following a unanimous vote at a recent meeting of the Faculty of Arts and Sciences.

The new designations will not change how the three departments are organized or the curricula they offer, says Dean of the Faculty Elizabeth Smith. But the change “officially reflects the reality of how these academic groups have already—and for a long time—operated with the autonomy of other departments on campus,” she says.

“Not every program wants to become a department, and that’s as it should be,” says Washburn, the Burlington Northern Foundation Professor in Asian Studies in Honor of Richard M. Bressler ’52. “The ability of faculty from different disciplines to come together to develop curricula and projects around shared interests, ideas, and methods is foundational to how the liberal arts at Dartmouth evolve.”

Until now, Dartmouth had not clearly defined the differences between departments and programs, Washburn says. He began studying the question when he was appointed associate dean in 2017, and, along with the other associate deans and the dean of the faculty, helped develop criteria—now adopted by the arts and sciences faculty’s Committee on Organization and Policy—that will allow other programs to determine whether they want to petition to change their designations in the future.

Among the guidelines: To be considered a department, academic units must have a critical mass of full-time tenure-track faculty; represent a distinct disciplinary field; be self-governing; offer a defined curriculum, including a major; show demonstrated student interest; and share contiguous office space.

At the same meeting, the faculty acknowledged that the Department of Education no longer meets the criteria for maintaining department status and heard about the plan to reconfigure the formal activities of the department as an administrative unit. Students will still be able to minor in education, and the three tenured members of the education faculty will be reappointed to other departments.

“Education no longer existing as an administrative unit should in no way be taken as a signal that this institution does not value education as a scholarly discipline,” Smith says. “On the contrary, by distributing the scholarship of education into departments with shared interests, we eliminate the isolation of the education faculty and provide its members with greater community and the opportunity to infuse the study of education into additional disciplinary departments.”

Education Chair Michele Tine says that Dartmouth’s decision is consistent with actions at other institutions.

“Nationwide, enrollments in teacher preparation programs have substantially declined in the last 15 years. Education departments have been reconfigured or closed as a result,” Tine says. “With that said, at Dartmouth, student interest in the field of education remains strong and I am pleased the education minor will remain. Investigating the complex world of education through a research-based, interdisciplinary lens has never been more important or relevant.”

“We think about the environment holistically, from the perspective of the natural sciences, the social sciences, and the humanities,” says Douglas Bolger, professor and chair of environmental studies, describing the department’s unique intellectual focus. “And we try to think of our students as people living in the environment—as human beings, as well as young scholars of the environment.”

The program launched in 1970 in conjunction with the celebration of the first Earth Day. At the time, it was one of the few programs of its kind in the country.

“If you look around at other institutions, virtually all environmental studies programs began in the ’70s,” Bolger says. “That was the same decade that environmental legislation such as the Clean Air Act, Clean Water Act, and Endangered Species Act passed. So there really wasn’t any sort of organized academic focus on the environment until that time.”

Bolger says the change of designation from program to department “is representative of a long evolution in our program, a maturing of this field within academia as a whole, and a continuing and increasing investment that the College has made over decades in this area.”

“Language is inherently human,” says Associate Professor of Linguistics Laura McPherson. “Linguists want to understand how this incredibly complex system develops, how children learn it, how it’s structured. And at the same time, we’re facing an unprecedented loss of linguistic diversity. And so we have an opportunity at Dartmouth to train students to understand the linguistic complexity that’s out there and to gain the tools to help protect it.”

The program began, like others at Dartmouth, as a means of bringing together faculty from other disciplines—including anthropology, classics, and psychological and brain sciences—with a common interest in linguistics.

“We’re inherently an interdisciplinary field of study, drawing on social science methods, humanities methods, and on physical sciences and natural sciences methodology to figure out what this faculty of language is,” McPherson says. “But linguists are linguists; it’s a self-contained field of study that is multifaceted.”

It’s also an increasingly popular major at Dartmouth. “Over the years, our course enrollments have grown—and that’s been a trend all over the country. And our faculty hires started to have full lines in linguistics.”

McPherson expects that the main impact of the name change will be on recruitment and hiring. “It doesn’t change anything about how we function day-to-day, but from a PR standpoint, it makes us feel more official,” she says.

“It’s impossible to understand our nation’s story without including Native peoples and the role that they played in the formation of this country and its operation today,” says Samson Occom Professor Bruce Duthu ’80, who chairs Native American studies.

The Native American Studies Program was officially created in 1972 as part of then-President John Kemeny’s push to rededicate Dartmouth to its founding mission of educating Native students.

“As one of the longest established programs, we’ve evolved over the years,” Duthu says. “But for the last several decades we’ve been functioning like a department—a relatively autonomous academic unit not dependent on faculty who are situated in other departments to support our courses.”

While the name change will not affect the department’s curriculum or organizational structure, Duthu believes it will make a difference outside of Dartmouth.

“There’s a notion of permanency—that we’re not dependent on faculty whose first priority may be to their home department,” he says. “For outsiders, the word ‘program’ has a connotation of being a somewhat loose affiliation around subject area, perhaps without the kind of coherence that we often attach to the more established bodies of knowledge, which is what a ‘department’ historically represents.”