The second admissions cycle of the pandemic brought a record number of applications. 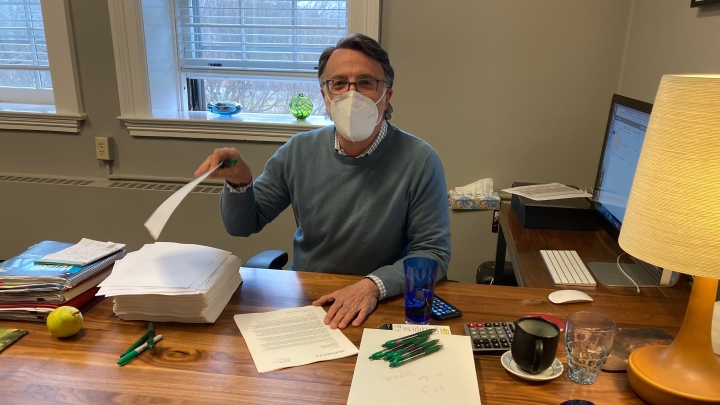 Lee Coffin, vice provost for enrollment and dean of admissions and financial aid, signs letters to applicants being offered admission to the Class of 2025. (Photo by Kate Domin ’19)
4/06/2021
Body

Dartmouth has offered admission to a broadly diverse Class of 2025 in a second pandemic admissions cycle that attracted an all-time record number of applicants, Lee Coffin, vice provost for enrollment and dean of admissions and financial aid, announced today.

Dartmouth has offered admission to 1,749 applicants to the Class of 2025 from the pool of 28,357 who applied, a 33% increase over last year’s applicant pool of 21,392. The acceptance rate of 6.17% is the lowest in Dartmouth history and the overall number of offers of admission is the lowest number in 40 years. Scholarship offers to the newly accepted class also hit a new high.

“We extended invitations of admission to a group of individuals who represent the 21st century. Their lives and careers will define this moment in global history, and their identities, intellects and ideals sync with that truth,” says Coffin.

“Dartmouth is proud and grateful to select the Class of 2025 from a remarkably accomplished pool of applicants who reflect the social, cultural, and economic diversity of our world,” says Provost Joseph Helble. “That this cohort of students accomplished all this in the midst of a global pandemic speaks to their grit and determination.”

The students accepted to the Class of 2025 come from a broad spectrum of society, with 48% of students identifying as Black, Indigenous, and other people of color (BIPOC). Admitted students represent 51 different tribal nations and other Indigenous groups across North America. A record-high 17% of students are the first generation in their family to attend college. Nine percent are the children of Dartmouth alumni, the same percentage as last year.

“It is safe to say this is the most broadly diverse accepted class in the long history of Dartmouth. They are engaged and curious, passionate and collaborative. In each, we saw a great match with our mission and values, and we will work hard in April to help each of them see that match from their perspective as well,” Coffin says.

The admitted students come from all 50 states, Washington, D.C., Puerto Rico, and Guam. California is once again the largest cohort, with New York, Massachusetts, New Jersey, and Texas rounding out the top five. Fifteen percent are foreign citizens or live outside the United States, with Canada, China, the U.K., India, and Brazil as this year’s top-represented countries.

“As a reader, I was struck by the vivid and cogent ways in which students are imagining how they might channel their intellect to respond to so many of the world’s challenges,” Coffin says. “Their mature and passionate view about post-pandemic society—from healthcare to social justice to sustainability—reflects their idealism as well their clear appreciation of Dartmouth as a great place to develop the skills to move forward.”

As decisions were released, 50% of the accepted class qualify for need-based Dartmouth scholarships totaling $51.6 million, up from $45.8 million last year at release. In addition, the average scholarship grant is $60,556, up from $55,600. A record $9 million in scholarships were offered to foreign citizens.

The prospective class includes 17.2% who are projected to be eligible for Pell grants, which are federal awards offered to students from the lowest socioeconomic quartile, a new record.

Because of Dartmouth’s response to COVID-19, Dimensions will not be held on campus for the second year in a row, but a full and dynamic schedule of online programming will be offered to accepted students throughout April, Coffin says.

The reply deadline for enrollments is May 3.