The discussion focused on the guilty verdict in the trial over George Floyd’s murder. 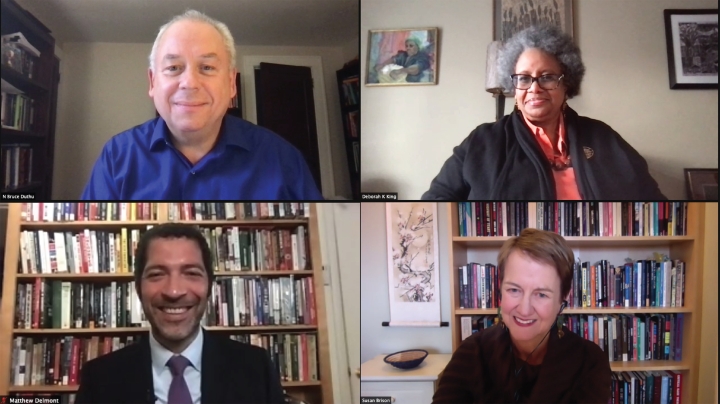 In a panel discussion April 22, Dartmouth faculty members shared their reactions to the conviction on Tuesday of former police officer Derek Chauvin for the murder of George Floyd, and highlighted the need to reframe conversations around race, crime, and justice as the country continues to grapple with these issues. Read more.
4/23/2021
Body

In a panel discussion April 22, Dartmouth faculty members shared their reactions to the conviction on Tuesday of former police officer Derek Chauvin for the murder of George Floyd, and highlighted the need to reframe conversations around race, crime, and justice as the country continues to grapple with these issues.

Considering the ramifications of the verdict, “we must resolve to do our part to promote antiracism as we travel, together, the road to our nation’s sacred promise of liberty and justice for all,” President Philip J. Hanlon ’77 said in his opening remarks. More than an academic exchange, the panel discussion, “The Chauvin Verdict: A Community Discussion on Race, Crime, and Justice,” is a chance “for each of us to better understand the role we can play going forward.”

Dartmouth will redouble its efforts “to build a diverse and welcoming community that celebrates and supports the success of every one of its members,” Hanlon said. “And in our role as a premier academic institution, we will continue to shed light on structural racism through our scholarship and active engagement with the diverse perspectives that exist on our campus.”

A video recording of the hour-long event is available here.

The discussion was led by Samson Occom Professor and chair of the Native American Studies Department Bruce Duthu ’80, who asked the three panelists to describe their reactions to the verdict; weigh in on related issues, based on their scholarly expertise; and share what they hoped their students would take away from the outcome of the trial.

Deborah King, an associate professor of sociology, said that from her life experiences, she understood that for herself and for the nation, “this was not a historic moment or a transformative decision.”

“I think perhaps the state’s attorney Keith Ellison said it best when he said that this trial was about accountability and not about justice,” said King, who, like her fellow panelists, noted that her response to the verdict included, but was not limited to, a sense of relief.

Accountability is crucial, “and certainly we are appreciative and thankful, and recognize the importance of Darnella Frazier’s video, Black Lives Matter,” and the millions of people who demonstrated around the world, King said. Yet those victories “simply mean that we must stay the course.”

“As an African American woman, a participant in social activism, and a scholar of law and society, I have learned that one’s endurance and commitment cannot rest on external conditions,” King said. “I believe in hope and prayer and action, but those must go on regardless of any single trial outcome or piece of legislation, irrespective of whether the outcome is ‘favorable.’”

Panelist Susan Brison, the Eunice and Julian Cohen Professor for the Study of Ethics and Human Values, said she was struck by many aspects of the trial, including the prosecution, which “did a brilliant job.”

The manner in which the trial attorneys defined excessive force also stood out to her, Brison said.

Rather than beginning only when Chauvin knelt on Floyd’s neck, as was suggested during the trial, excessive force was used throughout the arrest, starting when now former police officer Thomas Lane pointed a pistol a few inches away from Floyd’s face and shouted, “Put your effing hands up,” Brison said. Floyd “didn’t even know what he was being accused of. There was absolutely no need for this level of brutality.”

Brison outlined the rest of the arrest, citing additional examples of excessive force, and said the surrounding discussions need to be broadened to include what happened “at the very founding of our nation.”

“We need to look at the origins of the police in the South as slave patrols,” Brison said.

Panelist Matthew Delmont, the Sherman Fairchild Distinguished Professor of History and special advisor to Hanlon on matters of faculty equity, diversity, and inclusivity, said the scope of the problem is “absolutely huge.”

The Washington Post estimates that since 2015, police have shot and killed 5,000 people across racial groups, Delmont said. “Of course, the context of those cases is complicated, and there are different scenarios in each one, but that’s a tremendous loss of life at the hands of police.”

Delmont said he’s been asked several times whether the Chauvin verdict is a turning point.

There are reasons to be cautious in overstating its impact, including last month’s fatal police shooting of 13-year-old Adam Toledo in Chicago, Delmont said.

The killing came after police in that city shot and killed 17-year-old Laquan McDonald in 2014, and then attempted to cover up the incident, Delmont said. The release of a video of the shooting set off protests demanding accountability. The mayor at the time appointed a task force to study the department, and the Department of Justice investigated the Chicago police, just as they’re planning to investigate to Minneapolis police now, and found that a culture of excessive violence existed in Chicago. Police Officer Jason Van Dyke, who shot McDonald 16 times, was found guilty of second degree murder in 2018.

If the Chauvin verdict is going to be a turning point, it will be because of the work that people do every day, Delmont said. “If we have a sense of hope or optimism, that’s where it comes from, that people are fighting for different futures. They’re trying to create different systems that would truly value Black lives, truly make our country a better place and a more equitable place for all people.”

Vice President for Communications Justin Anderson shared questions from viewers, including one describing an acquaintance—a former police officer—as someone “who doesn’t see that American policing is rooted in racism.” The viewer asked for suggestions on how to address such thinking in a positive way.

Delmont cited resources such as books by historian Elizabeth Hinton, colleague Deborah King, and others. However, he added, if someone isn’t interested in understanding, “there are things beyond what any of us can do as teachers to help people see that light.”

Instead, Delmont said, the viewer might ask what it would mean for police to function in a way that is supported by the community.

“If I was in law enforcement right now, that would be my main concern, is that I think they’re losing a public relations war among large numbers of the community,” said Delmont. “If you start to lose the more middle-of-the-road folks who don’t encounter police on a day-to-day basis, you have a professional crisis.”

In his closing remarks, Duthu said he hoped the discussion would spark a desire in students for further conversations, perhaps within their house community settings or wherever they feel comfortable.

“I think that that would be a very productive and perhaps even uplifting exercise to draw closer to your own sense of grounding, values, and perspectives, and maybe even a sense of hope for a better future,” Duthu said.