Helble will continue to serve as Dartmouth’s provost through the academic year. 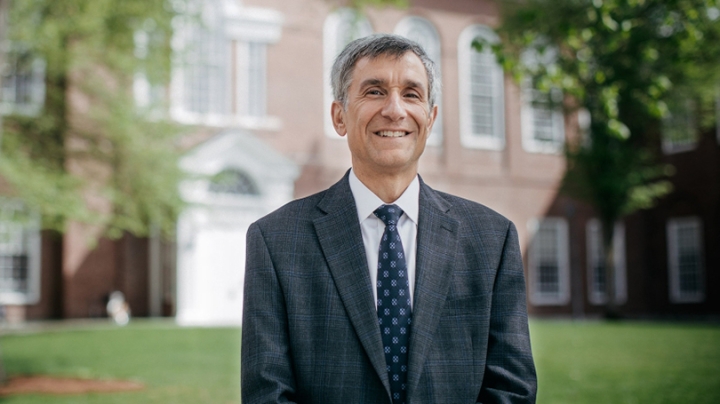 Joseph Helble, a recognized leader in the field of engineering who has served Dartmouth as provost since 2018, was today named the 15th president of Lehigh University.

He begins work at the Bethlehem, Pa., university—his alma mater—on Aug. 16. He will continue to serve as Dartmouth’s provost through the academic year. President Philip J. Hanlon ’77 will soon appoint an interim provost, and over the next few weeks he will name a search committee to conduct a nationwide search for the next provost.

In his 16 years at Dartmouth, Helble brought prominence to Thayer School of Engineering while serving as the school’s dean and a professor of engineering, and for the past year has led the institution’s response to the COVID-19 pandemic.

Kevin Clayton, chairman of the Lehigh Board of Trustees, says Helble’s impressive achievements and leadership at Dartmouth distinguished him among a pool of talented candidates.

“We are thrilled that Joe Helble, a widely respected leader and accomplished scholar and a 1982 graduate of Lehigh, will be joining us as our 15th president,” says Clayton. “Joe’s passion for excellence, interdisciplinary learning, and innovation in higher education makes him the perfect choice to lead Lehigh into the future. We were tremendously impressed by the personal and professional qualities that made him so successful at Dartmouth, and are confident those same qualities will make him an outstanding president at Lehigh.”

“Joe is the personification of calm leadership. As provost, he has steadily guided Dartmouth through the unprecedented turbulence of the last year. His data-driven approach and exacting standards, his willingness to listen and learn, produced decisions that were as wise as they were empathetic,” says Hanlon. “Joe is a leader, a scholar, and a teacher who is leaving Dartmouth a better place than it was when he arrived.”

Helble says he is inspired by the opportunity to serve as president of his alma mater.

“Lehigh is an outstanding institution, and I’m humbled by the confidence the board of trustees has placed in me,” he says. “Lehigh opened up the world to me in ways that I never imagined possible. When I was coming out of out of high school, I was the first in my immediate family to go away to college, and I had no idea what a residential college education would be like. And from the faculty and the staff, to my classmates and people who became lifelong friends, it was transformative.”

Helble, who has been a member of Lehigh’s board of trustees since this past July, received his bachelor’s degree from the school, with highest honors, in chemical engineering.

“I have been at Dartmouth for 16 years and never thought I would leave. But to have the opportunity to return, as president, to my alma mater, to the university that changed my view of what’s possible in life … I can’t even begin to describe how special this is for me,” he says.

The research university is located in the Lehigh Valley, Pennsylvania’s third-largest metropolitan area and home to more than a dozen colleges and universities. Lehigh educates more than 7,000 undergraduates and graduate students in five colleges spread over three adjoining campuses.

In Service to Dartmouth

Helble had served as dean of Thayer for almost 13 years and was in his fourth term when, following a national search, he was appointed Dartmouth’s provost.

Over the past year, he has played a critical role in guiding the campus community through the COVID-19 pandemic, providing regular updates about operations and decisions.

Helble became the face of Dartmouth’s response to COVID-19, managing the institution-wide work required in the past year and holding briefings twice a month on a webcast he and Vice President for Communications Justin Anderson created, called Community Conversations. Every two weeks, he has updated viewers on virus statistics, comparing Dartmouth’s infection rate to peer schools, the region, and the country. He has interviewed expert guests on topics ranging from the efficacy of vaccines to upcoming events organized to keep on-campus students engaged—at a distance—during quarantine.

Anderson, who appears in the webcasts, says a defining characteristic of Helble’s leadership is his strength as a communicator.

“His ability to articulate a vision, reassure a community, or explain complicated issues in a concise accessible way is extraordinary. Joe’s communications skills as a leader are matched only by his kindness and decency as a person,” Anderson says.

“Dartmouth has been so fortunate to have a leader like Joe Helble, first as the dean of Thayer School of Engineering and then as provost,” says Laurel Richie ’81, chair of the Dartmouth Board of Trustees. “Joe’s accomplishments—his commitment to increasing the representation of women in engineering, his vision for Thayer’s expansion, his tireless leadership through the COVID crisis—only begin to define his legacy. Joe brings inspiration, a critical eye, and a big dose of compassion to everything he does. Lehigh is in great hands with him as its next president.”

During Helble’s tenure as dean, the engineering school saw a sharp increase in the percentage of women engineering graduates. In 2016, Dartmouth granted 52% of its undergraduate engineering degrees to women, making it the first national research university to award more bachelor’s degrees in engineering to women than to men. The national average in 2018 was 20%.

While Helble was dean, the overall popularity of engineering at Dartmouth grew, with more than 70% of undergraduates enrolling in at least one engineering or computer science course by the end of his deanship. The increased interest in engineering, and in computer science, as well, led to the construction of the Center for Engineering and Computer Science on Dartmouth’s West End. As provost, Helble was among those digging a shovelful of dirt at the ceremonial groundbreaking for the $155 million facility in December 2018. The building is scheduled to open this fall.

An Expert in His Field

Helble, a chemical engineer, arrived at Dartmouth to lead Thayer in 2005, after serving as the Roger Revelle Fellow of the American Association for the Advancement of Science and spending a year working on technology and environmental policy issues in Washington, D.C.

In 2014, Helble and Thayer colleagues John Collier ’72, Thayer ’77, Robert Graves, and Charles Hutchinson received the National Academy of Engineering’s Bernard M. Gordon Prize for Innovation in Engineering and Technology Education, the largest educational engineering prize in the nation, for the design and implementation of the Engineering Entrepreneurship Program, which integrates entrepreneurship into all levels of the engineering curriculum. While Helble was dean, Thayer created the first engineering PhD innovation program in the country.

In 2017, the AAAS, the world’s preeminent general scientific organization, named Helble a fellow of the organization. He has been a member of many boards and panels, is the author of more than 100 journals articles, and holds three U.S. patents related to the production of nanoscale powders.

In addition to his Lehigh undergraduate degree, Helble holds a doctorate in chemical engineering from the Massachusetts Institute of Technology.

He says he and his wife, Rebecca Dabora, are looking forward to getting to know the Lehigh and Bethlehem communities. The couple has three adult children.