Psst! Have You Heard That Gossip Isn’t All Bad? 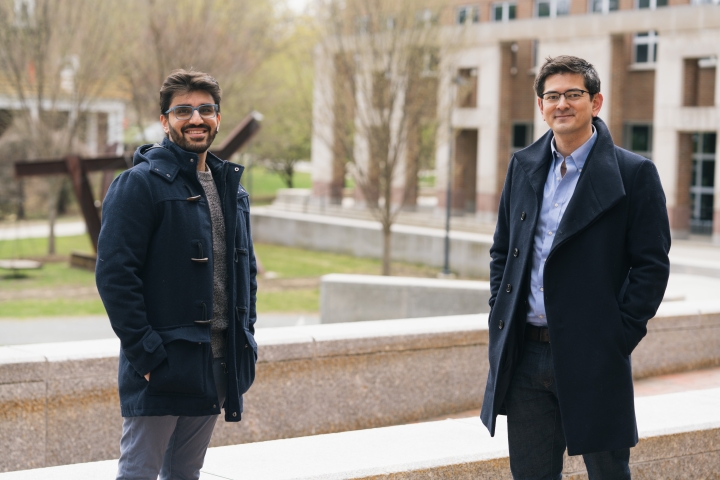 Eshin Jolly, left, a postdoctoral researcher in the Computational Social Affective Neuroscience Laboratory (COSAN) and Luke Chang, an assistant professor of psychological and brain sciences and director of the COSAN Lab, co-authored a study on gossip.
4/29/2021
Body

Gossip is often considered socially taboo and dismissed for its negative tone, but a Dartmouth study illustrates some of its merits. Gossip enables social connection and enables learning about the world indirectly through other people’s experiences, the researchers found.

Gossip is not necessarily spreading rumors or saying bad things about other people, but can include small talk in-person or online, such as having a private chat during a Zoom meeting, explain the researchers. Prior research has found that approximately 14% of people’s daily conversations are gossip, and primarily neutral in tone.

“Gossip is a complex form of communication that is often misunderstood,” says Eshin Jolly, a postdoctoral researcher in the Computational Social Affective Neuroscience Laboratory (COSAN) who co-authored the study with Luke Chang, an assistant professor of psychological and brain sciences and director of the COSAN Lab. “It can be a means of social and substantive connection beyond its typical negative connotation,” says Jolly.

Jolly and Chang were curious about why people in their personal and professional lives spend so much time exchanging information about themselves and other people, and sought to determine why people gossip and what function it serves.

They created an online game to examine the role of gossip and how it manifests as information becomes more uncertain within the game. In six-person groups, participants played 10 rounds of the game together. In each round, players were given $10 and could choose to keep the money or invest any portion of it in a group fund that was multiplied by 1.5x and divided equally among the players. The game creates an inherent tension between selfish freeriding and cooperative behavior, and is considered what researchers refer to as a “public goods” game.

Under some conditions, information was restricted so that participants could only observe the behavior of a few other players in their group. “Our inspiration was creating a lifelike scenario in which you’re a member of a community and affected by the actions of all other community members, most of whom you rarely observe and engage with directly,” Jolly explained.

In some games, players could privately chat with another player in the group. This allowed players to relay information about other players’ behavior to their partner, such as whether another player was freeriding. Afterward, players reported their willingness—or lack of willingness—to play with each player again.

Published in Current Biology, their findings demonstrate how gossip is a “rich, multifaceted communication” with several social functions. Different types of gossip emerged, depending on the amount of information available. Spontaneous conversations about others occurred more frequently during games when players could observe the behavior of only a few of their group members. When players could directly observe all of their group members, they tended to chit-chat and discuss a wider array of topics, the researchers found.

Participants relied on second-hand information from their partners to stay informed about other people’s behavior that they could not see, illustrating how gossip enables individuals to learn from the experiences of others when direct observation is not feasible, according to Jolly and Chang.

“By exchanging information with others, gossip is a way of forming relationships,” says Chang. “It involves trust and facilitates a social bond that is reinforced as further communication takes place.”

In a typical public goods game, players contribute less and less over time and an unraveling effect occurs that propagates through a network of people. However, in this study, cooperation declined less over time when players could privately communicate. Communication increased collective cooperation, the study found.

The researchers explain that gossip should not be relegated to just “baseless trash talk.” According to the paper, the team’s findings on the role of gossip are consistent with creating a “shared reality” in which friends and colleagues often find common bonds, establish alliances, exchange personal information, and discuss the behavior of others to establish a consensus of socially acceptable behavior.

“Gossip can be useful because it helps people learn through the experiences of others, while enabling them to become closer to each other in the process,” says Jolly.