The Theater Department Presents an Experiment in ‘Radical Joy’

The department’s winter-term production can be seen on YouTube. 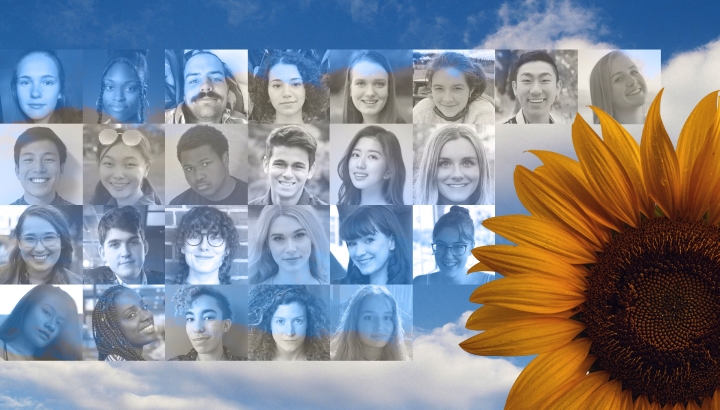 The student cast of The Radical Joy Project, a Department of Theater winter term production, premiered on April 8 and 9 and can be seen on the Hopkins Center for the Arts YouTube.
4/06/2021
Body

The Radical Joy Project, a blend of music, spoken word, theater, and movement that aims to “confront our past, breathe into our present moment, and envision a future that is inherently liberatory,” premiered this month and is available on the Hopkins Center for the Arts YouTube channel.

The prerecorded production—which explores the power of embracing joy in times of struggle, such as the COVID-19 pandemic and the fight for racial justice—first aired on April 8-9 and included a post-performance discussion via Zoom.

Co-director Carol Dunne, a senior lecturer in theater and the producing artistic director at Northern Stage, based in White River Junction, Vt., says the show—which was conceived and developed collaboratively with a student cast and crew over the course of winter term—is unlike any she’s been involved with at Dartmouth.

“During COVID, the greatest thing that has happened to the theater is that this has been a time of creation,” she says. “It’s been a great exploratory time.”

For example, instead of standard auditions, Dunne and her two co-directors—visiting artists Jarvis Green and Rebecca Martinez—invited students to “come play with us,” Dunne says.

“We had three evenings of what we called conversations with students over Zoom,” Dunne says, a process that attracted “students who had no experience in performing arts whatsoever as well as students who have been heavily involved in theater.”

The show took shape out of these initial discussions, incorporating participants’ interests, skills, and creative ideas, using techniques from “devise theater,” a style of playwriting in which the ensemble invents the production through a mix of improvisation and collaborative creative processes.

“We wanted to see, what are the participants interested in? What do they want to share? And then how do we take this and make it into a performance?” says Martinez, a Brooklyn-based choreographer, deviser, facilitator, and ensemble member of the national ensemble theater company Sojourn Theater and the BOLD Associate Artistic Director at the feminist WP Theater.

What emerged became a three-part program. The first, directed by Dunne, creates a space to mourn the losses of the past year, “from COVID to Black Lives Matter and George Floyd—just letting out the sadness,” Dunne says.

Martinez directed the second section, which focuses on the present—“how we’re finding joy in this moment, really focusing on simple joy and how we keep moving forward,” she says.

The third section, directed by Green—the award-winning founding artistic director of JAG Productions, a Black theater company based in White River Junction, Vt.—looks to the future, centering students who identify as Black, Indigenous, or people of color (BIPOC).

This final section imagines a Zoom “divinity circle” evolving from the early days of the pandemic to the present. The concept has roots in the Black church, and refers to “a space people can come to heal, to get something off their chest, to share anything that they wanted to share, to perform, to sing,” Green says.

Chara Lyons ’23, a member of the Black Underground Theater Association who plans to major in biomedical engineering, plays the role of the circle’s facilitator. “It’s modeled on a Sunday church service—a collective space for us all to come together and be,” she says.

Lyons, originally from Queens, N.Y., spent winter term in California. She was drawn to the project because, she says, “At the time, I was going through some hard things, and I wanted to find a safe space to collaborate with no judgment. This seemed like a really supportive environment.”

Dawn Lim ’24, who spent winter term at home in Singapore, served as stage manager for the production, and also as a participant in parts two and three. She says her approach to remote learning during the pandemic has been to overload herself with coursework.

“But when I joined Radical Joy, I found this space where I could slow down and just be in the moment—to just roll down a grass hill or go dance in the rain”—moments that found their way into the show, says Lim, who is considering a major in psychology.

Why a production centered around joy?

“Particularly for BIPOC artists and makers, there’s has been a focus on the tragedy of our stories—we hear about the trauma, but we don’t always get to hear the joy,” Martinez says. “So this project is both about how does joy restore us as makers, and what does it look like when we as makers focus on joy? How does that transform who we are and our work?”

The final product is “better than I expected—really beautiful,” says Lyons. “We really laid down our hearts, and my hope is that the audience can see that full picture of who we are and leave encouraged.”

“I’ve often been proud of the work we do in this department, but I don’t know if I’ve ever been more proud of our students than at this difficult moment,” says Associate Professor of Theater Jamie Horton, the department’s director of theater. “They are telling a much-needed story.”