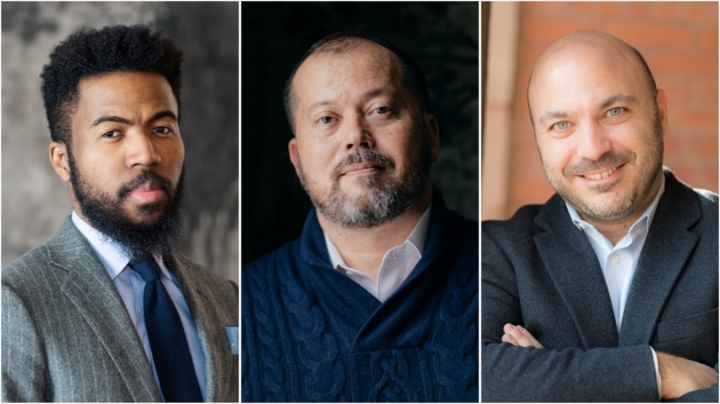 Three Dartmouth faculty members have been awarded fellowships from the John Simon Guggenheim Memorial Foundation—putting Dartmouth among the top 10 colleges and universities with multiple Guggenheim recipients this year.

The fellowship is awarded to “exceptional individuals in pursuit of scholarship in any field of knowledge and creation in any art form, under the freest possible conditions,” according the foundation’s website.

“These three writers, scholars, and teachers exemplify a fundamental strength of the liberal arts—combining rigorous inquiry with creative expression to help us see the world with new eyes,” says President Philip J. Hanlon ’77, himself a 1992 Guggenheim fellow who has been a member of the foundation’s education board since 2016. “On behalf of the Dartmouth community, I congratulate them for this well-deserved recognition of their tremendous literary accomplishments.”

Dean of the Faculty of Arts and Sciences Elizabeth Smith praises Bennett, Chee, and El-Ariss for their dedication to their students and their craft. “These are colleagues who consistently model how to pursue their own intellectual and creative curiosity while opening doors for others,” she says. “I am thrilled that this door has opened for them.”

“I write and teach about the relationship between African American literature and the life-worlds of plants and animals, and about how Black writers have historically theorized the relationship between education and human freedom,” says Joshua Bennett, whose book Being Property Once Myself: Blackness and the End of Man is a critical exploration of the boundaries of the human and nonhuman in the literary imaginations of Black writers from Zora Neal Hurston to Jesmyn Ward.

In addition to being a scholar of African American literature, Bennett is an award-winning poet. His first book, The Sobbing School, won the National Poetry Series in 2015; The New Yorker praised his second, Owed, as a “rhapsodic, rigorous poetry collection, which pays homage to everyday Black experience in the U.S.”

“Much of my poetry focuses on kinship and structural violence, how historically marginalized peoples have survived in the face of unthinkable odds, and what language they have used to describe that persistent striving, that meditative tenacity,” Bennett says.

After earning a master’s in theater and performance studies from the University of Warwick as a Marshall Scholar, Bennett completed his doctorate in English at Princeton. He has received fellowships from the National Endowment for the Arts, the Ford Foundation, MIT, and the Society of Fellows at Harvard University.

Bennett came to Dartmouth in 2018. “The students here are truly remarkable—as writers, as readers, as human beings,” he says. “Every time I teach a new course, I’m reminded anew of what brought me to this profession in the first place.”

He credits his Dartmouth faculty colleagues with supporting him “throughout the process of stepping into my first job, publishing my debut work of literary criticism, and most recently, becoming a father during a global pandemic. They have looked out for me from the beginning. They have helped to preserve my heart and mind.”

Bennett plans to use the Guggenheim to complete two book projects: a work of narrative nonfiction, Spoken Word: A Cultural History, forthcoming from Knopf; and a new collection of poems, The Study of Human Life, forthcoming from Penguin Books.

“This award would not have been possible without the love and support of my wife, Pam, as well as the shining constellation of family and friends who checked in on us over the past year,” Bennett says. “This was a community effort. I don’t know where I would be without the thoughtfulness and care of my people.”

With the fellowship, he also looks forward to having more time at home with his 5-month-old son, August Galileo. “He’s the reason I applied in the first place, and it means a great deal to be able to celebrate this moment with him,” Bennett says. “It’s like something out of a dream.”

“I am honored to be a part of this distinguished cohort and legacy,” says novelist Alexander Chee, who notes that, like many of those who ultimately receive a Guggenheim, he has applied for it several times.

“You just don’t know what will make the difference. I am overwhelmed with gratitude for this support for my work to come,” he says.

Chee is the award-winning author of three books—the novels Edinburgh and Queen of the Night and the essay collection How to Write an Autobiographical Novel—and the recipient of a 2021 USA Fellowship from United States Artists. He joined the Dartmouth faculty in 2017.

“When I think about my Dartmouth colleagues in this cohort—Joshua Bennett and Tarek El-Ariss—and I think about how much I appreciate and love their work, I know I’m in a good place if that’s who I work with,” he says. “I am always discovering new possibilities for my work, scholarship, and art here.”

With the support of both the Guggenheim and the USA Fellowship, Chee plans to pursue archival research in Boston, New York, and Seoul and Goheung, South Korea. “And I’ll be able to take some time just to write—the sweetest prize there is,” he says.

“America’s relationship to Korea reshaped it in ways we are still all reckoning with,” Chee says of his current research and writing projects. “Given what is happening in our country right now, I welcome the chance to make work based on Korea’s colonial history, the history of Korea’s pursuit of independence, and unity as well, and the relationship the United States has to all of this.”

Of the Guggenheim, he says, “So many of my artistic heroes have won this award.” He cites especially novelist Younghill Kang, who used his 1933 fellowship to write East Goes West, which is considered the first Korean American novel.

“I try to live up to his example,” Chee says.

“I’m thrilled and humbled by this great honor,” says Tarek El-Ariss. “I feel it’s a recognition of the interdisciplinary work and dialogue I’ve been engaged in. It’s also a recognition of Arabic and Middle Eastern studies as integral parts of the humanities.”

El-Ariss is the author of two books: Trials of Arab Modernity: Literary Affects and the New Political and Leaks, Hacks, and Scandals: Arab Culture in the Digital Age. He is also the editor of the MLA anthology The Arab Renaissance: A Bilingual Anthology of the Nahda.

As a child growing up in Lebanon, El-Ariss says that “meaning-making and interpretation became vital when the social and political order collapsed as a result of war”—and the desire to find meaning ultimately led him to study philosophy and literary theory.

“However, in the literary and cultural criticism I practiced, the ‘I’ had no place,” he says. “With time, I have come to make room for that ‘I’ and its peripatetic wanderings across languages, cities, and conflicts. The need to fix meaning gave way to a reconciliation with those moments of vulnerability that allow associations to appear and texts to connect. It’s from this state of vulnerability, which lies at the intersection of the personal and the literary, that my new book emerges.”

The new book, which the Guggenheim will allow him to complete, is titled Water on Fire: The Making of a Literary Scholar—a collection of essays that combine autobiography, literary criticism, and history to “tell the story of the Middle East with all its conflicts and displacements while offering a framework for a literary critical practice that is simultaneously theoretical and narrative, empathetic, and politically engaged,” El-Ariss says.

The project—which explores what he calls “the genealogy of wonder”—is a direct response to the events of the past year, including the COVID-19 pandemic and “the catastrophic explosion in Beirut on Aug. 4, 2020, that damaged my home and destroyed the city,” he says.

“This book is meant to bridge worlds and to reveal and revel in their interconnections: between the Middle East and the U.S.; ancient tales and contemporary ones; inner life and outer, personal life and academic,” he says.

“I wouldn’t have been able to obtain this fellowship without the incredible support of colleagues and the administration at Dartmouth,” El-Ariss says. “I feel so lucky to be part of this incredible community.”

About the Guggenheim Fellowship

Faculty in all disciplines interested in applying for external funding opportunities such as the Guggenheim Fellowship have access to resources through Dartmouth’s Grant Proposal Support Initiative (GrantGPS), which is led by Director Charlotte Bacon.