The 2021 finalists reflect on the virtual contest, and their experiences so far. 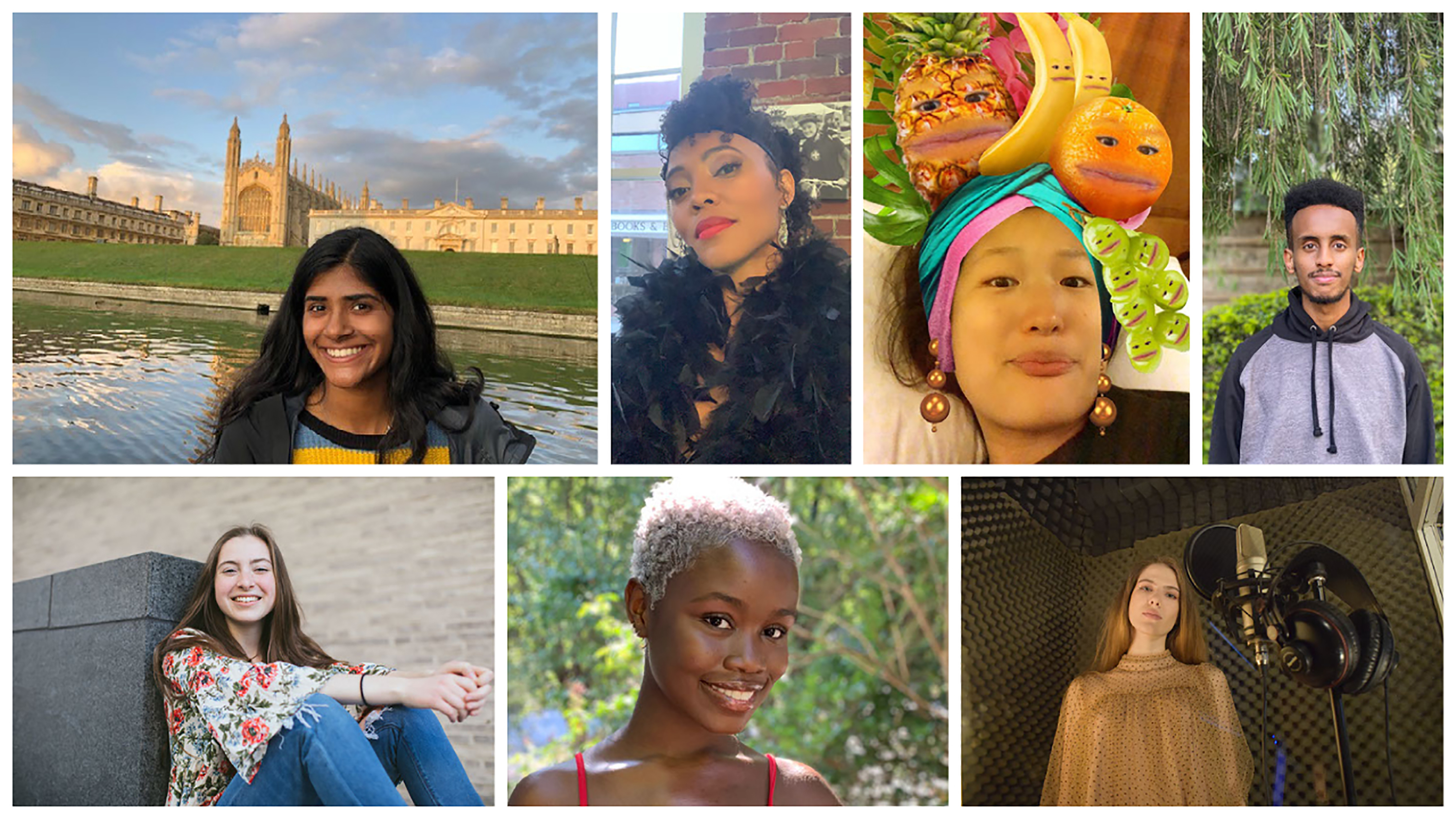 The Dartmouth Idol Finals, recreated this year as a virtual three-part series, will kick off at 8 p.m. on Thursday with performances by four of the eight finalists. The series continues the following night, also at 8, when the remaining finalists share the songs they have been fine-tuning over the past few months.

Online voting to help select this year’s Dartmouth Idol will be open between May 21 and the final segment of the contest, which starts at 8 p.m. on May 28. The winner will be announced during the May 28 episode.

The virtual 2021 Idol adventure started this past winter with about 50 contestants; of those, 20 went on to the semifinals in March. The students competing in the finals this week were chosen by a panel of judges and the audience, with votes cast online. Along the way, they have had support from Idol’s founding director, Walt Cunningham, and the rest of the Idol team.

Tickets for the series are available through the Hopkins Center for the Arts, which sponsors the competition. They are free for students and Hop members, but registration is required. There is a “pick your price” option for the general public.

Here are this year’s finalists, many of whom shared their thoughts about their Idol experiences with Dartmouth News:

Abate, a computer science major, started singing as a child and used to sing all the time, to the entertainment, and sometimes annoyance, of his family and friends, he says. “I honestly wasn’t that good at first.”

He took every possible opportunity to improve, joining ensembles such as church and school choirs. Then, in high school, he sang with the school music club and chapel choir and frequently performed at national music festivals, says Abate, who is from Nairobi, Kenya. “I truly found and began to develop my sound.”

Abate, who also competed in the 2020 Idol contest, says he’s looking forward to sharing the 2021 finals with an audience.

“My experience with Idol so far has been wonderful,” he says. “I think it’s exciting that I’m taking part in the very first virtual rendition of Dartmouth Idol. I feel like I have grown significantly as an artist since my last Idol performance, and much of this is due to the insightful mentorship which I have received from Walt, who is the brains behind the show. Admittedly, there have been some logistical issues associated with the virtual production, especially since I am so far away from campus. I do believe, though, that we’ve made it work, and I’m so excited for people to see what we’ve managed to create.”

Allum, who is from Trinidad and Tobago, sang in her school choirs, and as an undergraduate played Maria in The Sound of Music. She had been away from singing and performing for several years when she auditioned for Idol.

“My passion for performance was reignited during Idol,” says Allum, who’s grateful for the support she’s received from the Tuck community and the Idol team. “My voice can bring people together and be a tool for upliftment and social change. This is not a dream I can let die again.”

Leaving her country to pursue an MBA was “a quiet decision to pursue business over a career in music,” but it was challenging, says Allum, who reflects on the song she chose for the finals, Through the Fire, by Chaka Khan.

She says, “After surviving a grueling recruiting season, we were all faced with the intense racial division in the U.S. and an unprecedented global pandemic. But through these challenges, I felt God’s presence in my life in a new, unimaginable way as he brought me Through the Fire, into a deeper relationship with him and a renewed sense of confidence in myself as a business leader. Getting the opportunity to sing and work with such world-class musicians during my time at Tuck has been a tremendous and unexpected blessing. I chose this song because I believe the lyrics echo God’s message of hope to us as we walk through the challenges of life.”

An, a history major from Westchester, N.Y., has been singing for fun since childhood. Looking back, she’s thankful to her upstairs neighbors at home. They never complained, “although I’m constantly singing—loudly,” says An, whose early memories include hyperventilating while auditioning for The Wizard of Oz in second grade.

Dartmouth Idol has given her “butterfly feelings” and something to look forward to in a period of her life when she felt generally unexcited and unmotivated, she says.

She didn’t realize how joyful she would feel reading messages from her friends “and even one stranger (you know who you are)” about her semifinals performance, An says. “It was so cute to watch my mom watch my performance over and over again for weeks. I felt like she was proud of me.”

“I’m excited to experience this kind of connection and joy with friends and family again through my performance in this final round. Through my song in the final round, I tell the story of my growth in confidence. I no longer allow the gatekeepers of the performing arts who have excluded me throughout my life to reinforce the lie that I am not meant to succeed. I am free to dream and to be myself. The core of my performance is gratitude towards my God, mom, brothers, and best friends. It’s because of their love and support that I have had the opportunities and gained the confidence to authentically sing this song.”

Music has always been an important part of life for Ditmar, an engineering sciences major from Manahawkin, N.J., who competed in the 2020 Idol semifinals. She has sung and played the flute and piano since she was young, and as a first-year student, played in the Dartmouth Wind Ensemble. She is currently a member of the Glee Club.

“I had a fantastic experience performing in the Idol semifinals last year, so I was excited for the opportunity to audition again this year,” says Ditmar, who shares the challenges, and rewards, of participating in this year’s contest.

“Preparing and filming my audition and semifinal songs on my own was difficult, but my roommates and friends have been incredibly supportive and encouraging (even after hearing me practice the same song on repeat), and the Dartmouth Idol team has helped coach everyone throughout the process.

”Taking part in Idol has been a huge learning experience for me, especially during the finals round. I’ve had to push myself creatively and vocally, and I feel like I’ve grown as a performer because of it. Recording my solo in a professional studio for the first time was an unbelievable experience, and I will look back on it as a highlight of my senior year.“

Harathi, who’s from Portland, Ore., was just 5 years old when she started studying Indian classical music with vocalist and veena player Sreevidhya Chandramouli. During the pandemic, with classes being taught online, the mathematics and economics major wanted to take on a Dartmouth-related activity to help her stay more connected with the school.

After watching members from her a cappella group, The Sings, participate in previous Idols, Harathi thought it would be a wonderful experience, she says.

Competing in virtual Idol has been ”super fun,“ if a bit different from singing live, and she has appreciated being able to practice at home and knowing exactly how her performance will sound, says Harathi. ”It has also been very cool to explore outside and film videos to go along with my singing.“

”I have definitely grown as a singer and have been challenged by the songs and genres I am singing. I owe it to Walt and his team for allowing me to experiment and convincing me to step out of my comfort zone. I truly appreciate all of their help.

“I loved getting to head over to New Hampshire this term and record my songs. It was a great experience meeting the team (socially distanced) in person for the first time, because they are the magic behind Dartmouth Idol. Overall, it has been a wonderful time, and I am very fortunate for the opportunity to get to do something so fun.”

Pantelimon, an engineering sciences major from Bucharest, Romania, started singing early on, as a member of children’s music groups.

“Singing is now my favorite hobby and my most authentic form of expression,” says Pantelimon, who made it to the semifinals in the 2020 Idol competition. “I surround myself with music every day, and it’s been helping me through the pandemic.”

Before COVID-19, she hoped to become a Dartmouth Idol finalist because finalists get to perform songs arranged for them in front of a large audience, with a live orchestra and backing vocals, she says. “For me, there is nothing like performing for an audience (bonus points if there’s a band).”

Performing live is “one of those experiences that bring out my most vulnerable and present self. I miss the kind of emotional exchange that happens with the audience. This year’s Dartmouth Idol was the closest I got to experience anything like that—for instance, each finalist still got their own musical arrangement, recording and filming were done professionally. I’m very grateful for the hard work the Idol team put in to make this virtual show happen. They were so flexible and fun to work with, despite the time difference between the East Coast and Romania, where I live. Overall, Dartmouth Idol was one of the most fun Dartmouth-related experiences I had this year.”

A member of the Gospel Choir throughout her Dartmouth career, Young has always loved performing and singing, she says. But believing in herself, and her abilities, has taken some time.

As a first-year student, she made it to the Dartmouth Idol semifinals. But afterward, she felt discouraged.

“I let my stage fright get the best of me during my performance and forgot the words,” says Young, a Black studies major from Atlanta, Ga. “I also forgot to just keep going and to not let it show that I messed up.”

Thanks to Cunningham and the chance to perform with the Gospel Choir, she’s gained confidence.

“I’ve grown so much, vocally, and otherwise,” Young says. And making it to the finals has been “a nice ‘full-circle’ moment,” as she finishes her Dartmouth career.

“I remember being in the studio recording my solo song for the finals and really just not being afraid of being too loud or cracking when going for some of those high notes, and we all looked back at freshman year and sophomore year Amari who wouldn’t dare crack in front of anyone. I actually wanted to keep trying to hit these really challenging notes because I believed that I could. In the past, I would’ve settled and left feeling defeated. Leaving the studio this time, I felt elated and proud of myself, my work, and my growth, and it’d been a long time since I felt anything close to that.”

Six Things We’ve Learned About How the Pandemic Disrupted Learning

Description
A study co-authored by Professor of Economics Douglas Staiger that found remote instruction in the COVID-19 pandemic was a primary driver of widening achievement gaps is cited in a National Public Radio report.
Logo
Image