“This Land” explores Native and other artists’ engagement with the natural world. 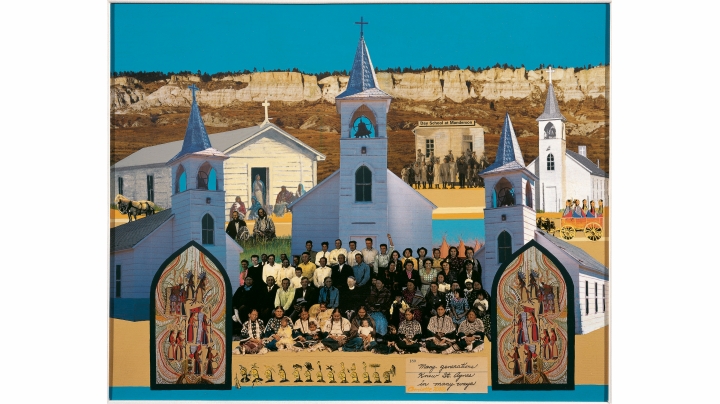 The Terra Foundation for American Art, through its “Re-envisioning Permanent Collections” initiative, has awarded the Hood Museum of Art $75,000 to support the curated project This Land: American Engagement with the Natural World.

The grant will support the first major thematic installation of the museum’s combined North American art collection, as well as accompanying public programming that aims to advance dialogues regarding what constitutes American art, says John Stomberg, the Virginia Rice Kelsey 1961s Director of the Hood.

“This Land represents an ambitious reimagining of what ‘American art’ can and should mean, and marks a decided move on our part to embrace the convoluted histories from which this art has emerged,” Stomberg says.

“As a collaboratively curated project, This Land: American Engagement with the Natural World, raises as many questions as it answers,” says Powell. “A main goal of our exhibition is to urge us to consider our own relationships with the natural world and our hopes for its future. It is also a project that we hope will encourage our colleagues to ask difficult questions and engage in meaningful dialogues about what constitutes ‘American’ art as well as who has the power to define it.”

Through its two-year “Re-envisioning Permanent Collections: An Initiative for U.S. Museums” project, Terra is awarding nearly $2.5 million in grants to 35 arts and cultural organizations in the United States. Established in 1978 and based in Chicago, the foundation’s grant program, collection, and initiatives are focused on fostering cross-cultural dialogues on American art locally, nationally, and internationally.

Dartmouth News can be reached at Dartmouth.News@dartmouth.edu.